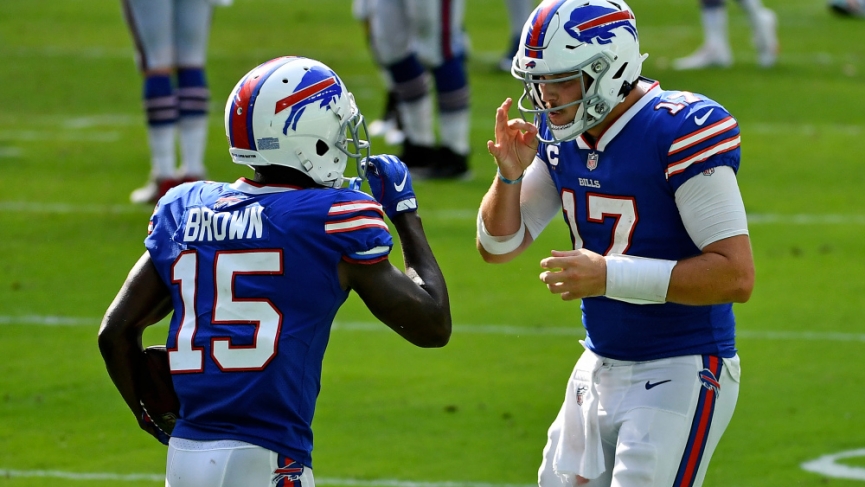 Odds.com’s LA Rams vs Buffalo Bills Pick for NFL Week 3: Sean McVay and the LA Rams are 9-2 ATS in their last 11 road games and are 4-0 ATS in their last 4 as a road dog. They head into Buffalo on Sunday in a battle of 2-0 teams, someone is taking the L in Week 3.

The Los Angeles Rams have looked impressive in a 2-0 start to their season both SU, and ATS wins over a pair of NFC East teams Dallas, and Philadelphia. The Rams offense has been well balanced running the football with success, and QB Jared Goff has been efficient completing 69% of his passes with 3 TD’s, and only 1 INT through the first two games. Defensively, the LA Rams have gotten a solid pass rush upfront from their defensive line anchored of course by Pro Bowler Aaron Donald, and their secondary was upgraded in the offseason by bringing in Jalen Ramsey. The Rams have surrendered a lot of yards, but have done a good job of bearing down when opposing teams get the football inside the red zone.

The LA Rams are not in the greatest of situational scheduling positions for this game though as the Rams decided to travel back home to Los Angeles following their victory against the Eagles last Sunday, and then fly back to Buffalo later in the week for this second straight road game in the Eastern Time Zone. It’s a negative spot to be sure because when you travel home for a pit stop in between two road games like the Rams are, family life, and other distractions often arise, and the lesser amount of practice and prep time comes with it as a result. This is definitely a game where purely from a spot, and scheduling standpoint, it’s an advantage to the Buffalo Bills playing at home against an LA Rams squad making three coast to coast flights over the past week with these back-to-back road games in Philadelphia last week, and now Buffalo this week.

Buffalo revving up the offensive engine in 2020

This is a new-look Buffalo Bills offense this season, and we’ve seen that clearly in the first two weeks. QB Josh Allen is pushing the football vertically down the field in the passing game with a bolstered receiving corps and an improved offensive line this season. In fact, Allen is leading the NFL in passing yards after the first two weeks of the season with 729 yards through the air. Stefon Diggs was brought in to Buffalo to be the true #1 wide receiver the Bills were missing last season, and he’s lived up to that billing with 16 receptions on 239 receiving yards at a 14.9 yards per catch average, and his presence has allowed John Brown, and Cole Beasley to slide down into more comfortable 2nd, and 3rd options at WR as opposed to being the featured receiver. Brown has 10 catches for 152 yards, and 2 TD’s while Beasley has nine catches for 128 yards. The Bills are averaging 8.9 yards per pass this season. The running game is rock solid with Devin Singletary looking strong in the first couple games carrying the rock, and Zack Moss, rookie RB out of Utah, showing flashes of what he can do in terms of running hard, and tough in between the tackles, and also catching the football out of the backfield.

Buffalo when fully healthy should have one of the best defenses in the NFL this season, but the Bills are a bit banged up on that side of the football right now especially at LB where two starters didn’t play last week Tremaine Edmunds, and Matt Milano and the Bills defense struggled at times to defend over the middle of the field against the Dolphins last week without them. Those are impact players, and it’s absolutely worth it to monitor their status for Sunday’s game against the LA Rams considering head coach Sean McVay often designs an offense to exploit the middle of the field with the likes of Cooper Kupp at WR and TE Tyler Higbee, who has become a favorite target of Goff. Those are potential advantages from a matchup standpoint for the Rams if the Bills don’t get those two LB’s on the field for this week. Jerry Hughes, and Ed Oliver along the defensive line for are also nursing injuries this week. Those two players are key pieces, and two of their best pass rushers, but the Bills are optimistic they will have both of them on the field for Sunday.

Yes there are some injury question marks with Buffalo, and yes, they have only beaten the NY Jets, and Miami Dolphins so far in their first two games, but I’m still backing the Bills -2.5 laying less than a FG at home in this game. I don’t like this scheduling spot for the LA Rams one bit with Los Angeles flying from Philadelphia after last Sunday’s game back home to LA, and then having to travel back east to Buffalo for this game. The Rams offense played well last week against an Eagles team that has been very disappointing in their first two games, and this will be a taller task against a better Bills defense, and a Buffalo team that to me as better roster than Philadelphia. On the flip side, Buffalo’s much improved, explosive offense under the guidance of QB Josh Allen should have success should be able to move the football here.

Allen’s ability to run with the football and his mobility against a very aggressive Rams defensive front should also pay dividends, and he certainly has the potential to create a few big gains with his ability to run. Rams QB Jared Goff played a really good game on the road against the Eagles last week, but overall for his career, he’s still struggled a lot more on the road than at home, and this will be a step-up challenge for him against a Bills defense that is better than they showed last week, and may get healthier with the potential that one or both of their injured starting linebackers may return on Sunday. It’s an early-season statement game for the Bills, and I expect them to get the win, and cover against the road-weary, and potentially jet-lagged Rams on Sunday. I agree with the upward movement in the total from 44 to 47, but it’s getting a bit out of range for my liking, so just a lean to the Over for me at the current number.