Keeneland Predictions Are Among Today’s Best Bets For July 9, 2020

The two graded stakes at Indiana chalked out yesterday and saw trainer Brad Cox and jockey Florent Geroux teaming up to win both. Shedaresthedevil was the easiest of winners in the Indiana Oaks. Geroux had to work a bit harder on Shared Sense but gave him a perfect inside out trip to win the Indiana Derby. Belmont and Woodbine begin their four day weeks while Keeneland enters day two of their five day meet. Let’s look at Keenland, Belmont and Woodbine predictions for these races.

The Keeneland fifth is an allowance for fillies and mares three years old and up going one mile on turf. I’m against all the horses on the outside who figure to take money. Lady Oxbow has been playing musical chairs with her trainers and yes she did run well in races at Tampa while having to work out trips from difficult posts. With post nine today however she will once again have to work out a trip that gives her a chance.
Jen Take Charge won her only race when head and head for the lead and there is enough speed to her insider that from an outside post, she will likely have to rate and I don’t trust her doing that.
Confessing can win and her 75 Beyer she earned last time fits in this group. The problem is she also earned a 75 Beyer in her turf debut eight races ago so there hasn’t been any improvement. If one or more horses take a step forward, she’ll likely settle for a minor award.

Not totally against the rail horse First Course but the only race that makes her competitive was her last where she was just fourth. Ivyetsu is another alternative as you can ignore her last race, an off turf event and ignore the Honey Ryder where she was wide, tugging throughout while trying a middle move. She has prior races that would be competitive.

The horse I want is Morning Gold (8-1 ML) as she has done little wrong in her turf races. While she did not hit the board in her lone attempt at Keeneland, it was a graded stake, she was hemmed in on the rail, never appeared comfortable all while running on a track that had moisture in it for the first time. I’m ignoring her last race off nearly a seven-month layoff on the wrong surface, dirt. Her two worst races have come on dirt and that race felt like a means to an end. Note she did not use Furosemide (Lasix) much as a two-year-old and this will be her first time using it when running on turf.

The Belmont 8th is an allowance event for fillies and mares three years old and up going one mile on dirt. The two lightly raced horses figure to take most of the money. The case for your odds on morning-line favourite Mrs Danvers is quite simple. She started three times with her lone win coming against Finite and Finite came back to win five straight including multiple stakes. Last time she faced Indian Pride who looks to be very promising for Chad Brown. 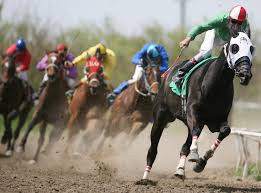 I simply prefer Grand Cru Classe (2-1 ML) who not only figures to be the better price, she also figures to have a tactical advantage setting her own pace and might be more talented. Trainer Bill Mott is known for giving his horses time to develop so whenever one wins at first asking, I’m always intrigued. In her debut she had to put up with a sloppy track, she was ridden early to get position, but was beat for speed.

This meant having to rate behind horses which she did. She then angled into the 2 path and when she was asked to run, she quickly accelerated to the lead and opened up the margin to win easily. She was a little green in the stretch but has every right to step forward in her second-lifetime start and note the second place finisher has come back to win.

The Woodbine 6th is a $25,000 claiming event for three-year-olds and up who have not won three races going one mile on turf. First Spring is your morning line favourite and may go off as the favourite on the class drop but offers little betting appeal. Note he took a significant class drop last October and went off as the favourite but had to settle for third. When facing tougher horses two starts later he once again was third. He ran okay in his return to the races a few weeks ago and I’m sure he’ll run well again, I just don’t trust him at a short price.

Perhaps Bel Bimbo can double up and his only two turf events were the first two races of his career. He, therefore, can show more on the surface but his two best races have come sprinting on synthetic and don’t want to take a short price to find out if he’s good enough on turf.

The horse I want is Kitten’s Boy (5-1 ML) who has back races at Woodbine on turf that would be competitive in this spot. Yes, he was the beaten favourite in this last race at Tampa but the winner came back to repeat in a starter allowance and then finished second in an allowance at Gulfstream. His trainer Gail Cox and jockey Emma-Jayne Wilson teamed up to win a race on Sunday.