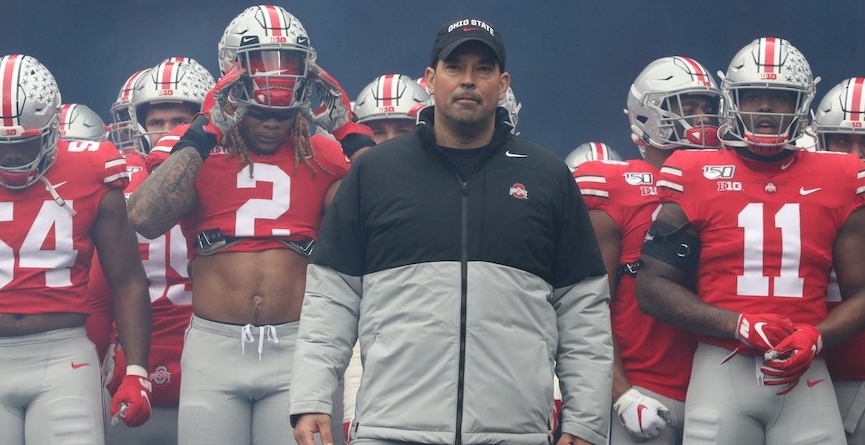 When the Big Ten announced in August it was postponing the college football season, there’s no question that the team that stood to lose the most was Ohio State. The entire conference would’ve been hurt, not just in lost revenue for 2020 but also exposure as high-profile recruits watched teams from the ACC, Big 12, SEC – and even the Group of 5 – compete and fight through the ‘new normal’ brought on by the pandemic.

The Big Ten will tell you none of that was behind the decision to resume play, but then, Donald Trump and Joe Biden are also shoveling a lot of manure right now.

Overwhelming favorites to win their third consecutive conference title, the Buckeyes will look to take that first step Saturday with a noon (ET) kickoff at Ohio Stadium against the Nebraska Cornhuskers. The Big FOX brings its cameras to The Ohio State for the opening weekend battle as far as the Big Ten is concerned. On the rise since first being introduced at 24½, FanDuel is selling the Buckeyes -27½. The total opened at 64, and I’m expecting that to go up a bit by kickoff.

That quick turnaround that my Cornhusker friends were expecting a couple of years ago when Scott Frost was hired, well, it hasn’t happened. In fact, it’s been downright painful for a fan base that desperately wants to see one of its former stars succeed on the sidelines. Nebraska missed a bowl invite for the third consecutive season last year, losing close contests to former Big 8 rival Colorado and new Big Ten rival Iowa to finish 5-7 and come up short.

Frost & Company are middling picks on the college football futures this time in the Big Ten, and they begin matters against arguably the two toughest opponents in the conference with a game on deck next week against Wisconsin in Lincoln.

Most concerning about things since Frost arrived is what has been a sluggish offense, to put it kindly. The Cornhuskers actually took a couple of steps backwards last season in scoring and yardage from Frost’s first year in 2018, despite having a very versatile dual-threat quarterback in Adrian Martinez. The good news is the unit will have an experienced O-line plus top tailback Dedrick Mills back.

The bad news is two of the team’s receivers are questionable for Saturday’s skirmish with undisclosed injuries. Wan’Dale Robinson, who ran for 340 yards last year while hauling in 40 passes, has been limited in practice, as has Omar Manning, a strong Juco transfer who was being counted on for some depth.

Even without playing a game, Ohio State is ranked No. 5 in both conventional polls. That’s actually a drop of three places from when the Buckeyes were ranked second in preseason polls before the conference decided to push the delay button on the 2020 campaign. Picked as a favorite to win it all, Ryan Day and his team have been anxious to get back on the gridiron since dropping last year’s CFP semifinal matchup against Clemson.

The Buckeyes lost a lot of talent to the NFL, but as usual, they have replacements ready to make their marks. Justin Fields is back at quarterback, with Trey Sermon transferring in from Oklahoma to assume tailback duties. Expectations are Fields will be targeting tight ends Luke Farrell and Jeremy Ruckert more, especially in the early going.

There are some injury concerns for Day and the Buckeyes, beginning with defensive tackle Haskell Garrett who just returned to practice after being wounded in a shooting this summer. His backup, Taron Vincent, has also been limited following a shoulder injury last season. It’s also thin behind Sermon at running back with both Master Teague (Achilles) and Marcus Crowley (knee) listed as questionable.

‘Huskers On 5-Game Skid In Series

Similar to how Texas A&M beat Alabama in its first season switching from the Big 12 to the SEC and hasn’t beaten the Crimson Tide since Nebraska has the same thing going on with Ohio State. The Cornhuskers hosted the Buckeyes in 2011 and posted a 34-27 decision as 10-point favorites. Ohio State has been chalked in all five subsequent meetings, coming away with wins each time while covering four of the five.

The Buckeyes put a 48-7 whipping on the Cornhuskers last season in Lincoln, dominating the game defensively as 17½-point favorites. Nebraska got its only cover in a conference matchup at The Shoe in Columbus two years ago, making Ohio State sweat out a 36-31 final giving up a dozen points. The last two matchups have finished short of the totals (66, 75).

Best Bet: Under 68 (-110) via PointsBet: There is a slight chance of rain on a cloudy day in Columbus, the thermometer in the low-50s at kickoff. A lopsided Buckeyes win wouldn’t surprise me, but I like the ‘under’ 64½ more for my free NCAA football pick.