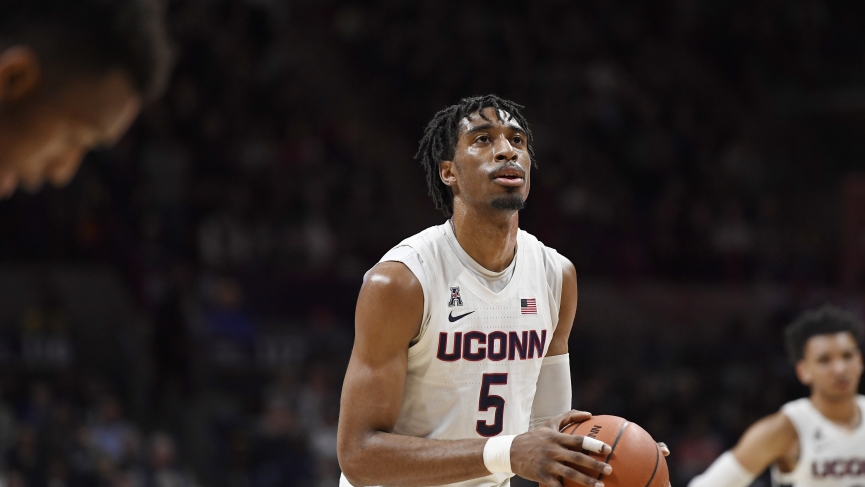 It will never be the same as in the 1980s when Big East basketball ruled. Still, the league has survived the breakup from 2013, and the newer schools in the realignment have helped the conference get back to being a force on hardwood. The league should be even better beginning next season with the addition of an 11th team as the Connecticut Huskies are coming home.

With Dan Hurley running the show at UConn now, the move from the AAC to the Big East should be even more interesting. Hurley played at Seton Hall in the early-to-mid 90s and now brings the Huskies back into the fold with the only downer being they won’t find their old rivals from Syracuse waiting on them.

Connecticut will find a couple of tough opponents in Villanova and Creighton waiting on them, with the Wildcats and Bluejays determined to prevent the Huskies of winning the Big East their first season back. Those two sit head-&-shoulders above the rest of the conference on the college basketball futures, while UConn odds sit in the 40/1 to 55/1 range. 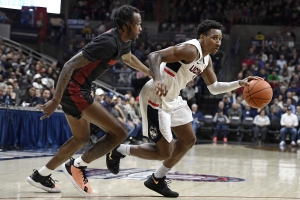 Hurley and his staff will have to deal with a couple of downers on the roster as the Huskies make the transition, both subtractions coming in the backcourt. Christian Vital ran out of eligibility after four solid seasons at UConn, the most recent as the team’s top scorer (16.4 ppg). Vital’s scoring was on the rise as the season came to a close, scoring 18+ in the Huskies’ final seven games and a big reason why Connecticut’s final six games went over the college basketball odds.

Alterique Gilbert, UConn’s assist leader, is also transferring to Wichita State, meaning he will remain behind in the AAC. Gilbert is making the move as a grad transfer, so he’s eligible to play for the Shockers in 2020-21.

What isn’t a downer is hearing James Bouknight has withdrawn his name from the NBA Draft and will return for his sophomore season. Bouknight was second on the team averaging 13.0 PPG and proved a deadly free-throw shooter as well. Jalen Gaffney, who was being utilized more at season’s end, is expected to take over at the point for Gilbert and was a 4-star score for Hurley in 2019.

Tyler Polley heads the frontcourt returnees after averaging 9.5 PPG, good enough for third on the team, though he’s recovering from knee surgery. Josh Carlton and Isaiah Whaley join Polley to give Hurley three seniors down low, but the key will be if Akok Akok can return 100% from a torn Achilles he suffered in February. The 6-10 forward was a 4-star addition in the 2019 class and an intimidating shot blocker.

There was a heavy focus in the paint on the recruiting front where UConn landed 4-star talents Andre Jackson and Adama Sonogo. The 6-6 Jackson was rated the 10th small forward of his class, and his versatility to play the 3 or 4, along with his defense, should have him on the floor early in the season. Sonogo stands 6-9 and figures to spend most of his time at the 4 or 5, his physicality on defense a perfect fit for the Big East.

Javonte Brown-Ferguson might need time to develop and adjust. The 6-11 center out of Baltimore might be pressed into action whether he’s ready or not if either Akok or Polley aren’t mended. The Huskies also landed Rhode Island transfer Tyrese Martin after he averaged 12+ for the Rams, but the 6-6 forward will have to sit a year.

It could take a year or two for the conference to settle on a new scheduling format. The format has been an 18-game league slate with teams playing each other twice in a home-&-away setup. There has been talk of moving to a 20-game slate a la the ACC and Big Ten, which would likely necessitate some Big East matchups in November or December ahead of the meat of the conference fixture. That won’t be the case for 2020-21, however, so it remains to be seen who UConn’s double-dip foes will be.

Those initial clashes with Villanova, Georgetown, and St. John’s should generate plenty of hype once the schedule is released. All indications are the Huskies will not take part in this year’s Big East/Big 12 challenge, though they could squeeze a contest during the Gavitt Tipoff Games against a squad from the Big Ten. Connecticut is part of a 4-team field for the Roman Legends Classic in Brooklyn, scheduled to take place just before Thanksgiving with Notre Dame, USC, and Vanderbilt filling out the bracket.

Those 55/1 odds at FanDuel might be underrating the Huskies a little, especially if they’re healthy to begin the season. It’s still going to be an adjustment going to the Big East and while UConn should dance next spring, the best-case scenario is making the Round of 32.