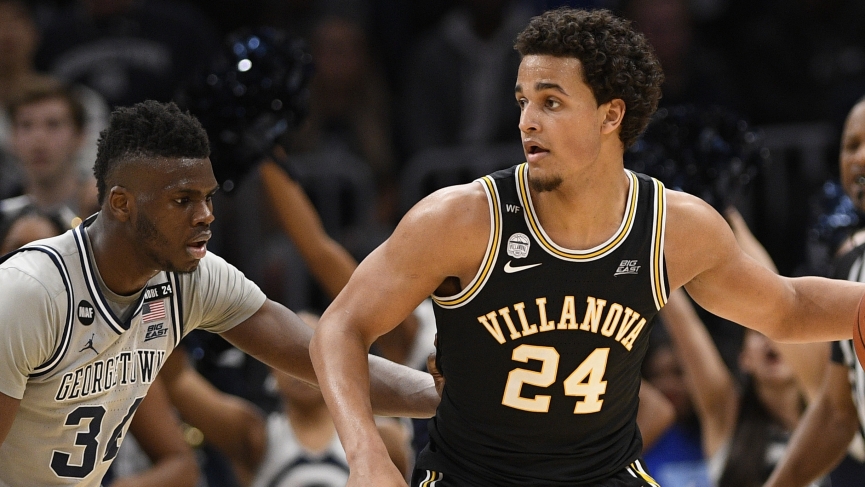 It has been a while since any college hoops team had a chance of returning its entire roster for the following season, but that’s a very real luxury Jay Wright might have at Villanova. Just a couple of years removed from having an inexperienced roster to work with, Wright could enjoy nothing but the experience when he trots his Wildcats out for the season, a huge reason why they’re right up there at the top of college basketball predictions.

Holding that up from becoming a reality is the decision Sadiq Bey has to make regarding his future. Bey has the option to remove his name from NBA Draft consideration after leading the Wildcats in scoring at a 16.1 PPG clip while netting more than 45% of his 175 attempts from beyond the arc. He has two years of eligibility remaining, and almost doubled his scoring output from his freshman season.

That’s a big chunk of offense to replace, but the cupboard is still very full behind Bey. FanDuel certainly isn’t afraid of that single roster subtraction, listing Villanova at 10/1 to cut down the nets in Indianapolis next April. That has the Wildcats second on the board behind Gonzaga (9/1).

3-Pointers Will Once Again Be A Common Weapon

My crystal ball shows a Villanova roster next season without Bey in the fold. The 6-8 small forward out of Washington DC arrived on campus two years ago as a 3-star recruit, ranking as the 137th player in the 2018 class and No. 34 for his position. Bey has turned those rankings into being a consistent pick late in the first round of most NBA mock drafts but must make up his mind one way or another by June 3. 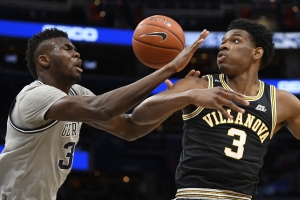 Villanova still has plenty of talent to pick up the pieces, and just about everyone can jack it up from beyond the arc at any time. The Wildcats put up 854 tries from outside in 2019-20, their 27.5/game rate actually lower than the previous season. Four players other than Bey attempted at least 108, and the team shot nearly 36% as a team, good enough for the top 50 in the country.

One of those was Jeremiah Robinson-Earl, who thought about the NBA but decided to return following a freshman season in which he led Villanova in rebounding and was one of five players to score 10+ a game. The 6-9 Robinson-Earl will form a nice frontcourt duo with Jermaine Samuels, who is back for his senior season after averaging 10.7 PPG to go with 5.5 RPG. Cole Swider and Brandon Slater will be expected to pick up more minutes down low.

The strength is definitely in the backcourt where senior Collin Gillespie was second in scoring (15.1 ppg) while directing the offense out on the point. Justin Moore was the top freshman performer with an 11.3 scoring average and swished nearly 40% of his 3-pointers. Bryan Antoine, a 5-star recruit from 2019, and Chris Arcidiacono didn’t see a lot of floor time as freshmen but should be more than ready to provide offense and backcourt depth.

College basketball predictions stay the course regardless of meek recruiting.

All of that talent returning to Villanova comes with another edge on the sword. Wright was fully expecting he’d have most if not all of last year’s team returning for 2020-21, and that made for a meek showing in recruiting with the possibility of not having any scholarships to offer. Compounding that was the fact the two prep stars the Wildcats did entertain, Tyler Beard and Jyare Davis, have committed to Big East rivals Georgetown and Providence, respectively. As it stands, Villanova will only have a few walk-ons to lengthen the bench.

There will be one new face on the floor next year, and it will be a familiar face that has already had a year to learn the ‘Nova way. Caleb Daniels sat out last season to satisfy transfer rules after coming over from Tulane. The New Orleans product led the Green Wave in scoring two seasons ago with just under 17 points a night and should play a key role in Wright’s rotation.

Will We See A Rematch With Baylor?

Despite jacking up treys at a high rate, Villanova’s games were not a boon to bettors playing totals to go past the college basketball odds; in fact, it was quite the opposite with 19 of the Wildcats’ 30 lined games falling short. That was certainly the case when they hosted then-No. 1 Kansas in the Big East/Big 12 Challenge, Villanova knocking off the Jayhawks with a late bucket for the 56-55 decision that fell more than 30 points shy of the scoreboard target.

The Wildcats will travel to Austin for this year’s event to take on Shaka Smart and the Texas Longhorns. Villanova may have already challenged another Big 12 school by then with Baylor part of the 2K Empire Classic at Madison Square Garden along with the Wildcats. The Bears posted a mild upset when the two met in the championship game of the Myrtle Beach Classic this past season.

If Bey decides to return, my college basketball prediction is that there’s a good chance Villanova will leapfrog Gonzaga as the favorite for the 2021 NCAA College Basketball title. I’m willing to play it that way even without him on the floor.