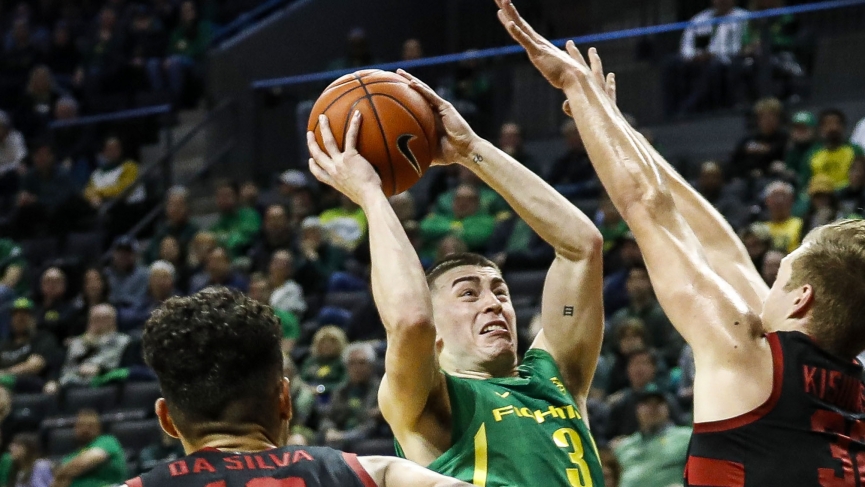 It has been a while since the Pac-12 was truly relevant in the chase for an NCAA Championship, with the conference making just one Final Four appearance since 2008. That lone team was Oregon in 2017, the Ducks bowing to eventual champ North Carolina in the semifinals. Dana Altman has a squad this time around that can not only get the Ducks back to the promised land but also elevate the conference back towards once proud levels. Let’s explore Oregon’s college basketball picks to win this year’s championship.

It will take more than Oregon to lift the Pac-12 in the long run, but the Ducks certainly seem ready to do their part. They should lose just one player, though it’s a big loss as Payton Pritchard departs for greener pastures, and college basketball futures board are carrying the Ducks as either a slight favorite in next year’s conference race or in a dead heat with USC.

Oregon was the lone Pac-12 squad to sit in the top 25 of the final polls, finishing 13th in the AP after beginning at No. 15 in the preseason. The Ducks odds are 28/1 at FanDuel to win their second National Championship and end the drought that has been running since 1939, putting them into the upper part of the 2nd-tier of favorites or lower 3rd-tier. depending on how you slice the chart.

Pritchard stuffed his stat sheet every night for the Ducks, pulling down rebounds and dishing the ball around all while averaging 20.5 PPG. He’s consistently projected as a middle pick in the 2nd-round of the NBA Draft and is joined in the exit from Eugene by guard Anthony Mathis (8.5 ppg) and forward Shakur Juiston (7.9 ppg, 6.3 rpg). 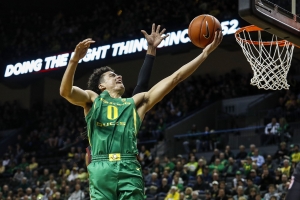 That’s a pretty big trio to do without, but Altman has players ready to step in to make it happen. It starts with the guard tandem of senior Chris Duarte and junior Will Richardson, each averaging 30+ minutes a game with double-digit scoring clips. Richardson connected on 46% of his 3-pointers and will be asked to shoot them more often, while Duarte works the glass well and has the ability to slide into the wing at times.

It just might turn out that the combination of NCAA eligibility shortcomings and a knee injury worked in the Ducks’ favor when it comes to N’Faly Dante. The 6-11 center missed the first nine games due to some faulty paperwork, and also sat nearly six weeks because of the injury. If he had strutted his stuff for a full season, Dante would’ve been a candidate for early entry into the NBA Draft. Now, he should help form a solid trio for the post with CJ Walker and Chandler Lawson. Each had moments of being overmatched in their freshman campaigns, but both also flashed some amazing potential along the way.

Can Frosh Recruit Step In At Point?

With all of the talent returning, it might sound strange to suggest the ability for Oregon to challenge the cream of college basketball lies with the performance of a freshman. But that is how things are looking as Altman might have to rely on his top recruit to direct matters on the floor from the point.

Jalen Terry comes to Oregon from Michigan as the 10th-rated point guard of the 2020 class, and stands somewhere between 5-10 and 6-1, depending on who’s supplying the info. That could hurt if he’s asked to defend taller guards, but his quickness will allow him to match up on offense with bigger bodies. Terry lacks a little in his outside shooting, but won’t be asked to score with the shooters around him.

Another new face being added is Eric Williams Jr., a 6-6 forward who sat last season following his transfer from Duquesne. Williams has been working with the other returnees and should be high in the rotation from the beginning after averaging 14+ both of his seasons with the Dukes.

One thing that has been missing in the Pac-12, and making it more difficult to command some of the national media attention, is an annual interconference event like the ACC/Big Ten and Big 12/Big East challenges. The conference is trying to get one going this season with the Coast-to-Coast Challenge and will partner with the Big 12 at the T-Mobile Arena in Las Vegas.

While it’s still unofficial, all signs point to Oregon being there to take on Baylor, another top contender for the 2021 NCAA Championship. The programs have met three times in the last five seasons with the Ducks winning and covering the college basketball odds the last two clashes. Additionally, Oregon is scheduled to take part in a 4-team bracket at the Emerald Coast Classic. That event is in November and includes the Florida Gators of the SEC, Illinois Fighting Illini of the Big Ten, and Iowa State of the Big 12.

Projected to be a 4-seed at this year’s NCAA Tournament, I like the Ducks to get there with a higher seed in 2021, and they’re definitely a squad that can take it all the way from there.