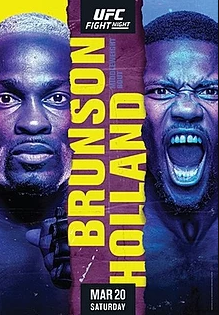 The event was headlined by UFC middleweight veteran Derek Brunson as he managed to stop the hype train that was the 2020 fighter of the year in Kevin Holland, defeating Holland by a unanimous decision. Brunson cashes as a +190 underdog, and ends Holland’s five-fight winning streak.

The co-main event was supposed to feature the return of fan-favorite UFC lightweight Gregor Gillespie, as he was to face City Kickboxing standout Brad Riddell. However, on the morning of fight day, the fight was postponed due to covid-19 protocol.

Coming into the main event, the favorite went 6-3 on the night but failed to turn a profit at -0.67 units. Meanwhile, 6 of the first 9 fights on the UFC Fight Night card went ‘Over’ the betting total, while the ‘Fight Goes the Distance’ prop went 6-3 for +1.94 units profit headed into the final fight of the night.

UFC Vegas 22 was not the explosive event that we have become used to seeing from the promotion, but it is the lead up to UFC 260 which takes place next Saturday, March 27th. Unfortunately, it was announced on the broadcast this evening that the co-main event for UFC 260, which featured the second title defense of UFC Men’s Featherweight Champion, Alex Volkanovski. As his title bout against Brian Ortega has been postponed due to covid-19 protocol.

Derek Brunson defeats Kevin Holland by unanimous decision, cashing as a +190 underdog. With the victory, Brunson improves to 13-6 in his last 21 professional MMA fights, dating back to his Strikeforce days of 2012. Brunson has profited for +6.57 units on the moneyline in that stretch.

Max Griffin makes short work of Kenan Song, defeating him by first round KO. With the quick finish, it is just the third fight in Griffin’s UFC career to go ‘Under’ the betting total, as the Over in his 11 fights in octagon drops to 8-3 for +2.46 units profit. Griffin cashes as the -179 favorite on the money, and improves to 5-6 in his UFC career, with his moneyline ROI returning to the black at +4.8%, with a marginal return of +0.53 units.

Montserrat Ruiz Canejo cashes as the +280 underdog over Cheyanne Buys in a spirit UFC Women’s Featherweight bout. Canejo controlled Buys with wrestling for the majority of the fight, and things got chippy at the end of the third round as the two women continued to throw punches after the bell. Words were exchanged and the two women had to be separated in the octagon. With the fight going the distance, it is the 43rd fight over the last 60 in the UFC Strawweight division that have gone Over the betting total, dating back to January of 2019.

Adrian Yanez picks up the 3rd round KO victory over Gustavo Lopez, cashing as a -210 favorite, and at +105 on the inside the distance prop. Since Yanez’s Dana White’s Contender Series debut back in the summer of last year, he has gone 3-0, with all three wins coming by way of stoppage, cashing for +2.21 units on the ‘Inside the Distance’ prop in his three octagon appearances.