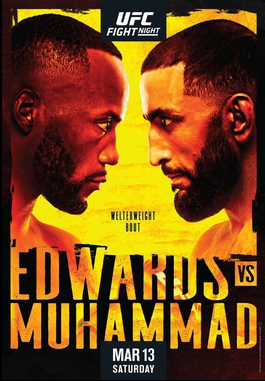 The event was headlined by top-ranked UFC Welterweight contender Leon ‘Rocky’ Edwards as he faced Belal ‘Remember the Name’ Muhammad. The fight ended in the second round with a no-contest stoppage, as Edwards caught Muhammad with a damaging eye poke that ended the fight prematurely.

Coming into the main event, Leon Edwards has won 7 of his 12 UFC appearances by way of decision, profiting for +10.10 units profit across his 12 UFC bouts. Edwards has a 10-2 record in the UFC, and has profited +5.66 units on the moneyline in his UFC career.

Meanwhile, similar to Leon Edwards, Belal Muhammad has won 7 of his 12 UFC appearances by way of decision, going 7-5 on the ‘to Win by Decision’ prop for +6.82 units profit. Muhammad is 9-3 in the UFC, and has turned a profit of +3.63 units on the moneyline.