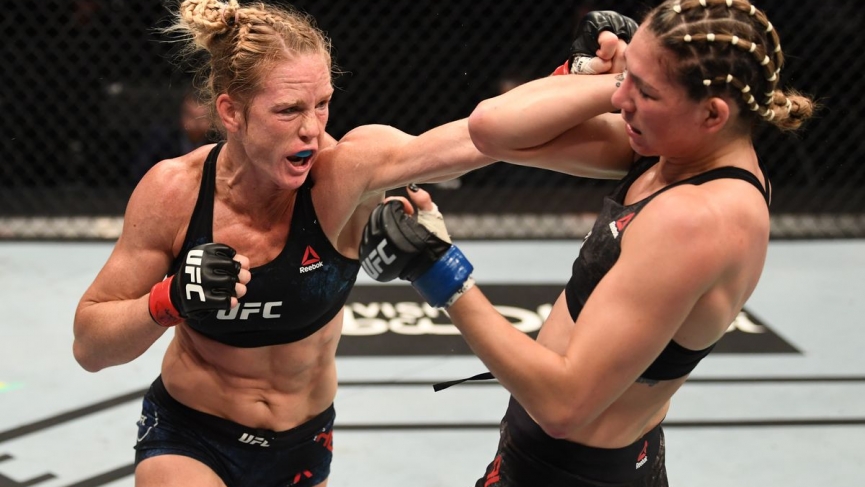 Odds.com’s UFC Fight Island 4 Closing Odds and Fight Results: UFC Fight Island 4 took place on Saturday, October 3rd, 2020 at the Flash Forum on Yas Island in Abu Dhabi. It was the first UFC fight card in Abu-Dhabi that was headlined by two female fighters, as Holly Holm took on Irene Aldana in the Bantamweight Main Event. Let’s take a look at the results and closing odds for sides, totals, and props for UFC Fight Island 4.

Luigi Vendramini picks up the TKO victory in just over a minute of the first round. With that Vendramini cashes as a rare lightweight +100 underdog. It is rare because the favorite in the UFC Men’s Lightweight division has won at a 69.2% rate since January of 2019. Albeit, the underdog has won in 4 of the last 6 lightweight matches. The ‘Under 2.5’ Rounds prop also cashes at +132. The Under result is another outlier in this division, as the ‘Over’ has hit at a 59.3% (70 of 118) rate over the last 21 months.

Casey Kenney picks up the decision victory over Heili Alateng. This was a fight in which many UFC fans and observers felt should have been stopped before reaching the judge’s scorecards. No one is denying the toughness of  Heili Alateng. However, it was obvious going into the third round that the Alateng was not equipped to compete in the fight much longer, and continued to take needless damage right up until the final bell.

This was the first of two UFC Men’s Bantamweight bouts that were on the Fight Island 4 card, both of which were won by the favorite, continuing the prevailing trend over the past two years. The ‘Over 2.5 Rounds’ prop cashed at a steep -200. Bettors who were on the Under in this fight should feel robbed of a win, as it is more than likely that this fight should have been stopped before the third round even started.

Thailand’s Loma Lookboonmee improved to 2-1 in the UFC, with a decisive bounce-back win over Jinh Yu Frey. Lookboonmee showed some high-level striking skills while in the Thai clinch, and simply had her way with Frey, who looked like she had little to no answer for the Thai fighter specialist Lookboonmee.

While Loma looked impressive, it was likely a step down in competition from her last fight against Angela Hill back in February. At the end of the day, Lookboonmee is a 5’1 fighter, fighting in a division that is too big for her, yet still competing marvelously. The unfortunate thing is that Loma will eventually be matched up with a taller and broader fighter, which will make it much harder for her to utilize that thai clinch striking that she was so successful with vs Frey. Look for Lookboonmee to be an up and comer in the women’s strawweight division. However, unfortunately, from a bigger picture approach, Lookboonmee just simply might not have the physical attributes needed to compete at a high level in the UFC’s Women’s Strawweight division.

Lookboonmee closed as about a -138 favorite, making her the 11th ‘coin flip favorite’ to pick up a victory at strawweight over the last two years. Since January of 2019, the favorite of -150 or better in the women’s strawweight division has now gone 11-4-1 for +4.54u profit.

Nassourdine Imavov picked up a hard-fought decision victory, in what some may suggest was the ‘fight of the night’. Imavov and Williams both took a decent amount of damage, but in the end, it seemed that Imavov did enough to win the bout at 2 rounds to 1. This was yet another UFC Men’s Middleweight bout that went Over the betting total, which was the case leading up to this in 61.8% of fights in that division since the start of 2019.

Charles Jourdain was one of the largest favorites on the card at -420 but only managed to fight to a split decision draw on Saturday night. It was a tightly contested fight, but overall, the consensus seemed to be that Jourdan deserved better than the scorecards of 30-27, 28-29, 28-28.

With the result, Jourdain is now 1-2-1 since entering the UFC. Which may seem as a bit of a disappointment for a fighter who was touted to be one of the newest rising prospects coming out of Canada.

With Jourdain being such a heavy favorite, there was a considerable amount of value on the ‘Over 2.5 Rounds’ prop in the +140 range. With the result, the Over in the UFC Men’s Featherweight Division improves to 65% (67-36) for +9.29u profit.

Carlos Condit made his return to the UFC octagon at Fight Island 4 and to critical claim. ‘The Natural Born Killer’ Condit put together a stellar performance against Court McGee. Condit landed a huge power punch on McGee in the closing stages of the first round, in what almost looked like a knockout. It was more than evident after the first round that McGee was compromised with a broken nose, and Condit would continue to lay it on for the remainder of the fight. Winning it rather easily.

Duško Todorović picked up a second-round TKO win via ground and pound over Dequan Townsend. Townsend was initially upset with the stoppage, however, based on Townsend’s inability to intelligently defend himself while on the mat, the stoppage was clearly warranted. Todorović closed as a heavy -330 favorite, and with the favorite, the favorite in the UFC Men’s Middleweight division improves to 47-28-1 since the start of 2019.

‘The Matrix’ Kyler Phillips looked especially good in his second-round TKO victory over Cameron Else. Phillips was incredibly elusive and generated most of his offense on the counter-attack. Once Phillips was able to get Else onto the mat, the difference in skill was paramount. Else was saved by the bell in the 1st round, but Phillips managed to get the takedown quickly in the second round against the fence and finish the fight off via elbows.

Phillips cashed as a heavy -450 favorite, as the chalk in the men’s Bantamweight division improved to 67-33-2 since the start of 2019.

The ‘Iron Lady’ Germaine de Randamie had one of the most fine-tuned and polished performances of her career on Saturday night. Juliana Pena was tough on the feet, but overall the majority of the trouble she put Germaine in was on the mat. Pena managed to take control of GDR on the mat in the second round, which led to a wild exchange of hand fighting. The majority of the blows landed were by Pena, and eventually, she moved in for a guillotine choke. However, de Randamie was saved by the bell. Past the midway point of the third round, Pena engaged with GDR in the clinch against the cage. Germaine managed to control Pena’s pressure along the fence and showed some superior technique by countering into a guillotine of her own. Putting Pena to sleep in the later stages of the third round.

Germaine to win by Submission sat at about +2300 all week but dropped to +1900 on fight day. The secret must have been out on Germaine, as it seems like some long-shot money came in on the submission prop late in the day.

What’s even more mind-blowing is that the ‘No’ prop that some sportsbooks posted on ‘de Randamie to win by Submission’ was listed at -6900. Based on implied probability, oddsmakers were suggesting that GDR had just a 1.4% chance to win the bout by submission. Absolutely defying the odds.

Carlos Felipe fought to a lackluster decision victory over Yorgan De Castro in a very undeserving co-main event. In a fight that seemed heavily lop-sided at times, it was rather curious that Felipe was booked as the underdog. While Felipe was not exactly dominating or putting on any sort of clinic. He was the less exhausted of the two and was putting out the higher output for all three rounds.

Holly Holm displayed a certain level of dominance over Irene Aldana in the main event of UFC Fight Island 4. Aldana really had no answer for Holm from the very get-go of the fight. Holm was able to suffocate Aldana with volume strikes while being able to remain out of range of any of Aldana’s attacks at the same time. It seemed to be rudimentary for Holm, as she seemingly circled around the cage for 25 minutes, picking apart Aldana in a way that wasn’t exactly expected.

Holm covered an incredible amount of distance in the victory and put together a showcase on how a veteran mixed martial artist is able to put together a decisive decision victory.

This bout was Holm’s first in the ‘behind closed doors’ setting, but marked her 12th fight in the UFC, with eight of those twelve being slated for five rounds, and eight of the twelve also going the distance.

Bettors who have wagered $100 on ‘Fight To Go The Distance’ in every one of Holly Holm’s UFC fights have gone 8-4 for a profit of +$256. It doesn’t seem like much, but it’s been a long term +EV proposition to follow throughout her career.

It was somewhat of a unique victory for Holm. As her superb ability was somewhat complimented directly by Aldana’s outright lack of ability. In fact, it seemed like at some points of the fight, it was more about what Aldana wasn’t doing, as opposed to anything specially that Holm was doing. For a good amount of the fight, Holm was circling the cage, with Aldana making no attempt to cut Holm off of her path. Eventually, the damage Aldana was taking just added up, and she wasn’t able to mount any type of return for the barrage of strikes that Holm was putting out.

Overall, it was a strong veteran win by Holm, and with the victory, she puts herself right back into the conversation at the top of the UFC Women’s Bantamweight Division.