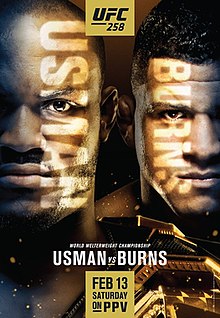 The event was headlined by a UFC Welterweight Championship bout between the ‘Nigerian Nightmare’ Kamaru Usman, and Gilbert ‘Durinho’ Burns.

Kamaru Usman won the bout via a devastating third-round TKO. Cashing as the -240 favorite, and at +305 on the ‘Inside the Distance’ prop.


With the victory, Usman now has two finishes in three title defenses, with it being only his 4th win by stoppage in his 13 fight UFC career. Going back to his Legacy FC days, Usman is now 14-0 in his last 14 fights, with +6.63 units profit on the moneyline.

Earlier in the day it was announced that the lead-off bout of the event between Gillian Robertson and Miranda Maverick would be scratched from the card, due to Robertson dealing with a ‘non-covid’ illness.

Kamaru Usman wins via 3rd round stoppage, cashing at +275 on the T/KO prop and +305 on the Inside the Distance prop. With the T/KO win, Usman now has 4 stoppage wins in his 13 fight UFC career, and has profited +2.73 units on the prop since 2015 and the start of his UFC career.

Alexa Grasso picks up the decision victory as a slight coin flip favorite, with the victory. Grasso is now 9-3 in her last 12 fights going back to her Invicta FC debut in 2014, profiting +2.04 units on the moneyline in her career. Grasso has now gone to a decision in 7 of her 8 UFC bouts, picking up the decision in 5 of them.

Ricky Simon comes into this fight with a 10-2 record in his last pro-mma bouts, going back to his time between the Contender Series and LFA in 2017. A flat bet on Simon on the moneyline would have profited +3.79 units so far in his pro career. Meanwhile, Brian Kelleher has 10 fights in the UFC, with 5 finishes, cashing for +13.24 units profit on the ‘Inside the Distance’ prop in his UFC career.

Belal Muhammed picks up the decision victory in a fight that was alot closer than the lines indicated but in the end Muhammed pulled out the wins after a gutty 15 minute performance. It was the second welterweight bout of the night to go Over the betting total, and th

Polyana Viana picks up the impressive submission victory over Mallory Martin in the first round via arm-bar. With the victory, the underdog has now won 4 of the last 6 ‘coin flip bouts’ with a favorite lined at -150 or better.

Chris Gutiérrez picks up the unanimous decision over Andre Ewell. With the fight going the distance, 6 of Ewell’s 7 career UFC bouts have gone ‘Over’ the betting total for +3.07 units profit.