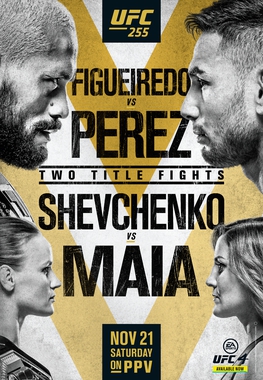 UFC 255 Odds Results: UFC 255 took place on Saturday, November 21st, 2020, at the UFC Apex Center in Paradise, Las Vegas, Nevada. It was headlined by two championship bouts in both the Women’s and Men’s flyweight division.

Both champions retained their UFC gold, with Deiveson Figueiredo doing so in spectacular fashion with a 1st round submission.

Valentina Shevchenko won in a weary decision over Jennifer Maia in what was a sweaty five-round bout that saw the defending champion, and -1600 favorite drop a round, possibly two, to the Brazillian Maia. However, Shevchenko picked up the unanimous decision victory, cashing at +200 on the decision prop.