How to Bet UFC 254 Main Event: Khabib vs Gaethje 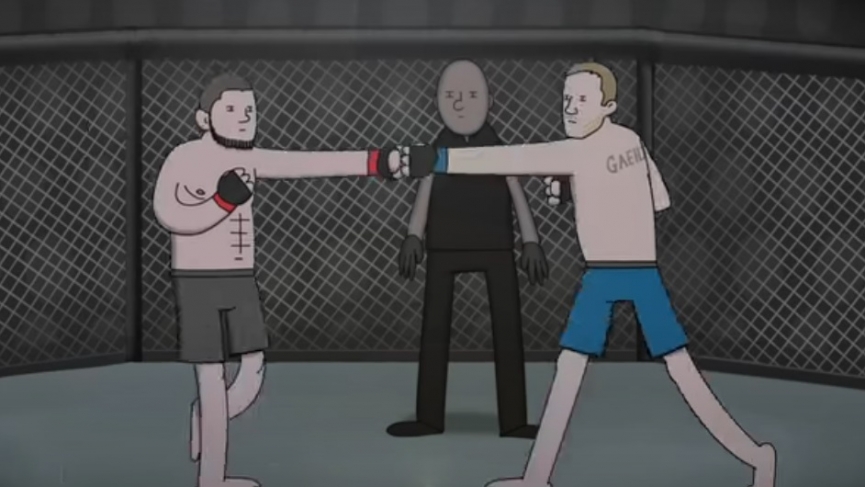 UFC 254 Betting Guide – Khabib vs Gaethje: It’s an incredible story that has us back in Abu Dhabi, 13 months after Khabib Nurmagomedov’s last UFC fight. How much the scope of MMA, and the world, has changed since then. A story that leads us to one of the biggest fights in UFC, if not MMA Lightweight history. Khabib vs Gaethje.

The road to UFC 254 is an incredibly unique one. Its story includes the hardships of the modern world, a global pandemic, a son losing his father, and a combat sport tied up in between. Where it begins is where it will all end. Abu-Dhabi, United Arab Emirates. The last time Khabib Nurmagomedov stepped foot in a UFC octagon to fight, was at UFC 242, vs Dustin Poirier. It was the first UFC event that Khabib was able to fight with his father Abdulmanap Nurmagomedov in attendance, as he was unable to travel to the United States due to visa issues. Unfortunately, it would be the last time his father would see him fight.

After numerous failed attempts, Khabib was to make his UFC return in April of 2020, to finally face the former interim UFC Lightweight Champion Tony Ferguson. As the event loomed closer, the COVID-19 pandemic worsened around the globe and started to threaten sporting events in North America. On March 11th, the NBA, as well as the NHL, announced it was postponing its season due to the pandemic. The mounting pressure from local state authorities forced the UFC to have to move the event from Brooklyn to another location. However, three weeks prior to the fight, Khabib announced that he was unable to travel to the United States due to Russian travel restrictions. This would be the fifth time that Ferguson and Khabib have had a fight scheduled and called off. The lightweight division’s #2 fighter, Justin Gaethje, stepped in as a late replacement for the April 18th event. However, even after Dana White attempted to move the event to Tachi Palace, in order to circumvent statewide ‘lockdown’, the April 18th, UFC 249 event was again called off. Moving to May 9th in Jacksonville, Florida.

At UFC 249, Justin Gaethje defeated Tony Ferguson in the 5th round by KO. Winning the UFC interim Lightweight Championship. Immediately following the fight, both Dana White and Gaethje confirmed that the next Lightweight title fight would be Gaethje vs Nurmagomedov.

Just two weeks after UFC 249, media outlets reported that Khabib’s father had contracted COVID-19, and was experiencing severe complications. After being put under a medically induced coma, Khabib’s father Abdulmanap passed away due to heart failure on July 3rd.

From the mountains of Dagestan to UFC champion.

Whether in spirit, or in person, Abdulmanap was in Khabib’s corner every step of the way.

“Father’s plan” is not finished just yet. The job is not quite done…#UFC254 pic.twitter.com/iAGJJmrtXl

Just nine days after the news of the death of Abdulmanap Nurmagomedov hit the MMA world. The UFC launched its first of many ‘UFC Fight Island’ events, starting with UFC 251. The purpose of this endeavor by the UFC was to accommodate fighters who were unable to travel to the United States, due to various travel restrictions caused by the COVID-19 pandemic. The project has created a ‘safe-zone’ or ‘bubble’ on Yas Island in Abu-Dhabi, and events have been held at the ‘Flash Forum’, a semi-enclosed, open-air stadium. The reason why this is important is that this allowed the possibility for a return of Khabib, and an eventual ‘title unification fight’ between Khabib and Gaethje.

Too much of the MMA world’s surprise, Khabib announced on July 28th, just over three weeks after his father’s death, that he had agreed to fight Justin Gaethje at UFC 254 on October 24th, 2020, and will likely be the last ‘Fight Island’ event to be held in 2020. As the UFC plans to return to Las Vegas in November of 2020.

Although the Tony vs Khabib fight would have been, from all accounts, a modern-day MMA ‘super-fight.’ MMA fans are likely being treated to an even better clash of styles. While Tony Ferguson was potentially Khabib Nurmagomedov’s biggest test on the ground. Justin Gaethje presents a whole different and very unique challenge to Khabib. One that can not be compared to the challenge he would have faced if the Tony Ferguson fight ended up taking place.

Justin Gaethje is one of the most dangerous stand-up fighters in the UFC. His brawling style has made him a must-see fighter over the last few years in MMA. Since his loss to Dustin Poirier in April of 2018, Gaethje strung together three consecutive wins by way of first-round stoppage, leading up to the 5th round TKO victory over Ferguson as UFC 249 in May. It seemed as though Gaethje’s head coach Trevor Whitman, finally got him to take a different approach to fighting, and was far more calculated against Ferguson than we have seen in any previous performance.

Justin Gaethje’s path to MMA comes via his all-American pedigree as an amateur wrestler, at the University of Northern Colorado. None the less, Justin’s offense has mostly come from his ability to stand and bang, especially since coming to the UFC back in 2017. Gaethje, although known for being a very dangerous wrestler, only has one submission to his credit on his MMA record, and has yet to attempt a takedown since entering the UFC.

This is in contrast to the Khabib, who has won 4 of his last 6 fights from finishes created by takedowns. 3 by submission (Poirier, McGregor, Johnson) and 1 by ground and pound (Darrell Horcher). In fact, Khabib has never won a fight in the UFC by way of a standing strike. All of his finishes have come by either submissions or TKO’s via ground and pound. That being said. Khabib is riding a 12 fight win streak in the UFC lightweight division. Along with his 28-0 record, the longest active winning streak in professional-MMA.

Justin Gaethje has been a slightly more profitable fighter to bet on, in his MMA career. Albeit, he has fought in 5 more fights with professional odds posted. Khabib has gone 12-0, with a $100 bettor profited +$617 backing him in every fight so far in his UFC career. While Gaethje, going back to his ‘World Series of Fighting’ days he’s on a 15-2 run, for a profit of +7.77 units.

Khabib has won 6 of his last 11 UFC bouts by decision. $100 bettors who have backed the Russian to win by decision his last 11 fights have profited +$914. Meanwhile, Justin Gaethje has never gone to a decision in his UFC career.

Khabib/Gaethje: Inside the Distance Odds

Khabib/Gaethje: Inside the Distance Trends

The Picks: There are multiple ways to approach this fight, depending on who you think is going to win. The path to victory for Khabib is likely going to be the same as all of his other high profile fights. Which entails turning his opponents into dust, via grappling against the fence, takedowns, and ground and pound. We’ve seen Khabib make it look easy against some of the top UFC Lightweights there is, including Dustin Poirier, and Conor McGregor, making them both tap out to chokes. The only difference here is, Justin Gaethje has a far superior ground game to most of the fighters Khabib has faced in the past. While we saw Al Iaquinta withstand the punishment of Khabib for five straight rounds, it took some elite-level defensive grappling on the mat to keep him from being smashed to dust and finished by Khabib. This is the path to victory that seems most probable for Nurmagomedov.

The Path To Victory: Khabib

If you’re going to back Khabib, the best way to do so is ‘by Decision’ at +275 (via Bet365). Justin Gaethje has the wrestling expertise to evade the positions that will get him into the trouble we see Khabib’s opponents get into while on the ground. For the most part, if Gaethje is able to avoid those ‘danger zones’ on the mat, he should be able to keep himself from taking the devastating ground and pound that ‘the Eagle’ loves to dish out to grounded opponents. If Khabib wins this fight, it will likely look a lot like the Iaquinta fight, where he just dominates for the majority of rounds and picks up a decision victory. Gaethje’s wrestling ability will likely negate Khabib’s ability to get a finish via submission, which will lead to ground control and Khabib’s patented, suffocating unanimous decision victory.

The Path To Victory: Gaethje

As for Justin Gaethje, the path to victory for him seems rather clear. He’s going to have to knock Khabib out. What made Gaethje so dangerous against Tony Ferguson will still be in play here. If Khabib’s movements are not precisely calculated at every moment of this fight, he could run into some trouble from Gaethje’s ultra-imposing style. The deciding factor in this fight for Justin will be his overall striking speed. If Gaethje can be precise and land on the mark when exchanging blows, especially when on the counter-attack, he may have a shot at catching Khabib in a vulnerable position and being able to get a finish. Further, if Khabib isn’t ultra-aware when gaining his feet after wild scrambles, something this bout will likely be full of, then Justin Gaethje’s creativity as a striker will come into play, and will give him the opportunity to possibly put a stop to one of the greatest winning streaks in combat sports history. While you’re still able to get Gaethje at as high as 3-1. It’s not a greedy play to take him to win ‘Inside the Distance’. In fact, there is a case to be made for betting both ‘Khabib by Decision’ at +275, and Gaethje ‘Inside the Distance’ at +400 (via WilliamHill)

Justin Gaethje’s toughness and wrestling prowess will likely keep him out of finishing range for Khabib. While it seems on the opposite spectrum, the longer this fight goes, the more it will likely favor the Russian. Gaethje’s best chance will be early in this fight, whereas Khabib has a tendency to ware on his opponents, dragging them out into deep waters, and drowning them with takedowns and ground and pound.

Get on these props now, because with this fight trending towards being one of the biggest of 2020, if not in UFC history. These markets are sure to be priced out by the time the cage door closes on Saturday afternoon. Until then, enjoy the fights.