Fight Island is almost here and so are my picks for UFC 251!! Like most, if not all of you, I have been impatiently waiting for what has been promised to us by Dana White as the most exciting/stacked card of the year!! And, just when we thought the drama was over, the card was set, the news of Gilbert Burns tested positive for Covid-19 hit me like a kick to the liver.

Losing the main event was definitely a gutshot that I wasn’t prepared for.  But then the hero we needed stepped in to make this an even more anticipated main event.  Jorge Gamebred Masvidal stepped up on 6 days notice to save the main event and will be challenging Kamaru Usman for his Welterweight Championship!! With 3 title fights on Fight Island, this event has every opportunity to be one for the history books and a lot of fun for us gamblers!!  Who is ready to make some money with the DUCK!?!

The fight we have been waiting for! However, is this the right time for this fight? For Jorge Masvidal fans, I don’t believe it is. Masvidal has an extreme amount of momentum with his unexpected knockout of Darren Till, his record-breaking flying knee knockout over Ben Askren, and his dominant TKO win over Nate Diaz. The BMF champ as we know it is 100% deserving of a title shot.

However, to take his first-ever title shot on six days’ notice against the champ Kamaru Usman is an extremely tough task. Usman has had a full camp and with the help of Trevor Wittman, he can only get better. Usman has been in camp, training for a 5 round championship fight, while Masvidal was at a Brazilian steakhouse eating bacon-wrapped filets two nights ago.

Now, I know Masvidal has been training, but there is a huge difference in training, and training for a championship fight. In past fights, Masvidal has also had a lot of problems getting off his back by strong grapplers. As much as I would love to see Masvidal pull off this incredible win and continue his dream story, I just don’t see it happening. I believe that Usman is going to be in better shape, and will be able to dictate the pace that will cause Masvidal to fade in the later rounds.

Usman’s size and clinch/wrestling game against the cage is going to be the key to making this fight miserable for Masvidal. Don’t get me wrong, Masvidal has the ko power and striking to end this in round 1. However, that has never happened to Usman. I also don’t think with a coach like Trevor Wittman, Usman will let his emotions get in the way and get into a street fight with Street Jesus. Usman is going to use his range to set up his wrestling and that will be his clear path to victory.

The rematch that we have been waiting for between these two. In the first fight, Rose looked incredible. Her striking was crisp, accurate, and her combinations were landing in bunches. She was literally picking Jessica apart at will. The way this fight was going, it seemed that Rose was going to box her way to win. However, things changed pretty quickly.

The first time Rose was on her back, Jessica attempted to slam Rose. At that point, you would think Rose would have tried to make the adjustment. Instead, she allowed Jessica to slam her, and this time that slam would end the fight. In an odd choice of words, I would say that Rose beat Rose.

I believe that Rose can make the adjustments needed in order to get the win in this rematch. Whenever Rose has lost in the past, we have seen her make the corrections and evolve into a better mixed martial artist. For Jessica, her style has remained the same. She is a powerhouse who throws hard, slams hard, and keeps moving forward.

However, as we saw in the first fight that style didn’t work against Rose, and I don’t believe it works in this fight as well. If the fight by some chance goes to the floor I also believe that Rose has the advantage. Outside of another crazy slam, I see Rose picking apart Jessica on her way to a win, possibly even a finish in the later rounds of the fight.
Prediction: Winner Rose Namajunas

The King of Rio returns for another title shot against the dangerous Petr Yan. However, this is a different version of the once-dominant goat of the 145lb division. During his reign, Aldo punished his opponents with nasty leg kicks which would then set up his dangerous striking to secure his victories. As Aldo has put more miles on him, those leg kicks seem to have faded to no longer being as much of a threat to his opponents. 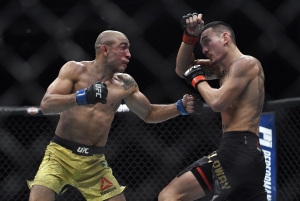 On top of that, he faces a very tough weight cut. Even though he claims it’s going well, from experience that type of weight cut is never easy especially at this point in his career. Aldo is facing an extremely tough opponent in Yan. Yan is a fast, powerful, and extremely intelligent striker. What impresses me the most about Yan is his patience and his ability at the same time to dictate the pace.

I believe that Yan’s speed and pressure are going to be too much for the King of Rio, especially if Aldo doesn’t utilize the leg kicks in order to slow Yan down. I see Yan pressuring Aldo early on with combinations eventually leading to a 2nd round stoppage and becoming the new 135lb champ.
Prediction: Winner- Petr Yan

Being that the odds on all the favorites here are pretty high, it’s very hard to be willing to place a straight bet on any of them. However, if you are going to go down that road, I would lean towards Rose at -215. The best move in my opinion would be to parlay Rose, Usman, and Yan. Some betting advice, if you place this Parlay ( which I love) and you get to the last leg of the parlay which would be Usman.

Feel free if you want to stress less and place a straight bet on Jorge Masvidal. This is called a hedge. If you place a small bet on Masvidal it becomes a win /win and you minimize your risk. If Usman wins, you hit the parlay for a little less money. If Masvidal wins, you either break even or make a slight profit. Either way….win-win