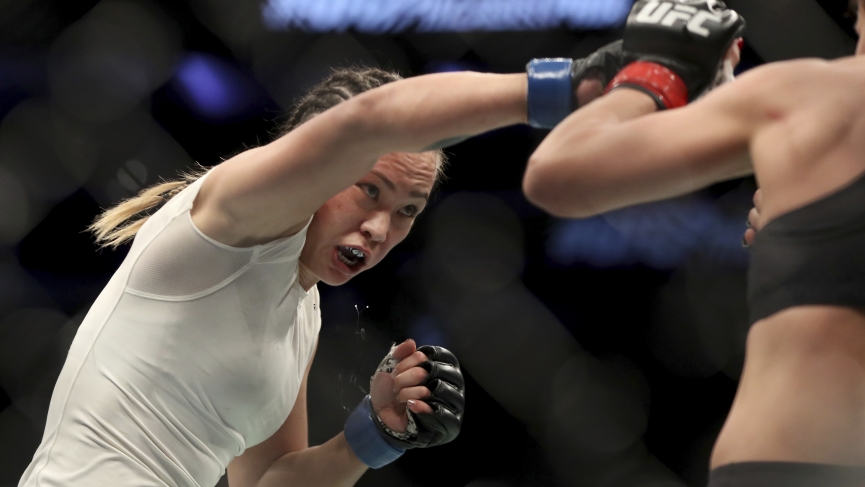 From a betting perspective,  the biggest favorite on the card is bantamweight Julia Avila at -310 against Sijara Eubanks. I don’t see any value on Eubanks as the underdog in that fight.

Angela Hill will look to avoid two straight losses when she meets Michelle Waterson in the main event. While Hill is a slight favorite at -125, I do see some value on Waterson as the underdog. Here’s why.

Hill (12-8) is coming off a controversial split decision loss to Claudia Gadelha at UFC Fight Night in May, which halted the California native’s three-fight win streak. Prior to that setback, the 34-year-old had stoppage victories over Ariane Carnelossi and Hannah Cifers during that span.

Waterson (17-8) is also coming off a split decision loss, but to former strawweight champion Carla Esparza at UFC 249 in May. The 34-year-old will be looking for her first win since March 2019, after dropping fights against Esparza and former champion Joanna Jedrzejczyk. The Jackson/Wink MMA product has gone the distance in her last six fights, so don’t expect a finish in this one despite this being a five-round main event.

While it’s understandable why Hill is the favorite having won three of her last four fights, I think there is value on Waterson. For starters, Hill only has a two-inch reach advantage in the matchup but other than that, these 115-pound fighters are nearly identical in terms of age and height. Waterson has more experience and has fought better competition including two former champions in the division. For the most part, Waterson always makes her fights close despite most of the time being the undersized fighter. In this matchup, she won’t have to worry about the size of her opponent because Hill is very similar in stature. Expect Waterson to keep this a close fight and pick up a tightly contested decision on the judges scorecards.

Khama Worthy looks for his third straight win in the Octagon when he meets undefeated Ottman Azaitar. While Worthy has looked great in the UFC so far, I do see value on Azaitar as the underdog.

Worthy (16-6) is coming off an impressive stoppage victory over Luis Pena at UFC Fight Night in June, where he handed the ATT product his first stoppage loss. The 33-year-old is currently riding a seven-fight win streak and is undefeated since moving up to the lightweight division in 2018.

Azaitar (12-0) hasn’t fought since a TKO victory over Teemu Packalen at UFC 242 in September 2019. The 30-year-old has finished his last four opponents and has only gone the distance once in his 12-fight career.

Despite Worthy having more experience in the Octagon and looking impressive so far in his UFC tenure, I do see value on Azaitar as the underdog. “Bulldozer” has never been finished in his career and if Worthy can’t get the stoppage victory in this fight, he could end up getting outstruck on the feet. While the layoff is a bit of a concern, I expect this to be a close fight and I think Azaitar can either sneak out a decision or possibly finish Worthy on Saturday night. I’ll take Azaitar with that underdog play.

Tyson Nam looks to build off his highlight reel win in his last fight when he faces Matt Schnell in the flyweight division. While the Hawaiian looked great in his last bout, I’m surprised to see him as the betting favorite and I see value on Schnell as the underdog.

Nam (19-11-1) only needed 32-seconds to pickup his first UFC victory after knocking out Zarrukh Adashev at UFC Fight Night in June. The 36-year-old is 3-2 in his last five fights after dropping his first two UFC fights to Sergio Pettis and Kai Kara-France.

Schnell (14-5) had his four-fight win streak snapped in his last bout after suffering a first round knockout loss to Alexandre Pantoja at UFC Busan in December. The 30-year-old switched things up this camp and is training at Fortis MMA, where he got to work with UFC featherweight Steven Peterson and UFC bantamweight Miles Johns among other standout fighters at that gym.

I think Schnell has a great chance to win this fight and I look at his last loss as a simple mistake, rather than being outmatched. The Louisiana native has more experience in the Octagon with a 4-3 overall UFC record and also comes into this matchup as the younger fighter. In addition, Schnell has a one-inch height and 4.5-inch read advantage in the bout.

If Nam can’t finish this fight early, expect Schnell to keep the WSOF veteran at bay over the three-round affair with his reach and pickup a decision. For that reason, I see value on Schnell at +105.