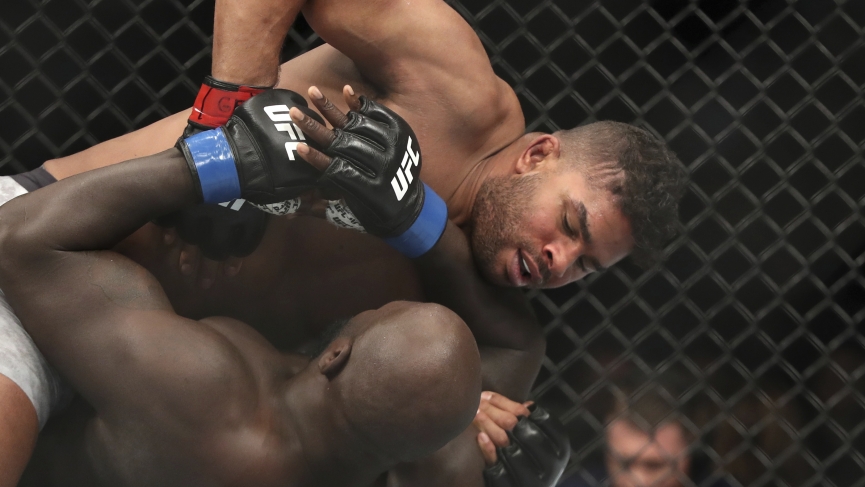 Alistair Overeem vs. Augusto Sakai prediction and my underdog best bets are what we will look at for UFC Vegas 9 taking place this Saturday at the UFC Apex in Las Vegas. The main event features former heavyweight title challenger Alistair Overeem against Augusto Sakai. While the co-feature has the rebooked Ovince Saint Preux vs. Alonzo Menifield light heavyweight fight.

From a betting perspective,  the biggest favorite on the card is strawweight Brian Kelleher at -235,  I don’t see any value on Kelleher at those odds unless you were to look at some prop bets.

Former Strikeforce heavyweight champion Alistair Overeem looks for his fourth win in his last five fights when he meets Augusto Sakai in the main event.

Overeem (46-18) has gone 11-7 in the Octagon, including wins over Brock Lesnar, Junior dos Santos and former heavyweight champion Fabricio Werdum. The 40-year-old has stopped eight opponents in his UFC career and has only gone the distance once in his last seven fights. Most recently, the Dutch fighter defeated Walt Harris by second-round TKO back in May where he was nearly finished in the opening round.

Sakai (15-1-1) heads into this matchup on a six-fight win streak and has never been finished in his 16-fight career. The 29-year-old Brazilian boasts a perfect 4-0 record in the Octagon, most recently defeating Blagoy Ivanov by split decision at UFC Fight Night back in May.

Despite Overeem being 11-years older and losing seven UFC fights by knockout, I don’t think Sakai is the fighter to put him away. The Elevation Fight Team member has 64-career fights compared to Sakai’s 17. Not to mention, Overeem also has an impressive kickboxing record at 10-4 and is a former K1 champion. Overeem also has a height and reach advantage in the matchup, so I see it being difficult for Sakai to get on the inside for a potential knockout. Expect Overeem to find his range early on and pick up his timing. Onc he finds that he’ll batter Sakai as the rounds go on for a fight-ending TKO finish. For that reason, I do see value on Overeem at -160 in this fight.

Thiago Moises looks for back-to-back wins for the first time since Aug. 2018 when he battles Jalin Turner on the prelims. While Moises is a slight favorite, I do see value on the underdog Turner at +135.

Moises (13-4) is coming off the biggest win of his career when he submitted Michael Johnson at UFC Fight Night back in May, in a fight where he was arguably losing the first round. The 25-year-old has gone 2-3 in the Octagon, with his only other win coming against Kurt Holobaugh at UFC 237.

Turner (9-5) last competed in February where he picked up an impressive second-round TKO victory over Joshua Culibao at UFC Auckland. “The Tarantula” also has a 2-2 record in the Octagon, including a TKO loss to Vicente Luque at UFC 229 where he competed up a weight class at welterweight on short notice.

While these two are very similar in terms of age and experience, Turner boasts a four-inch height and 5.5 reach advantage in the matchup. If Moises can’t get this fight to the ground, I see Turner using his range and keeping the American Top Team product at bay. From there, Turner will either batter Moises on route to a TKO victory or more likely, earn a hard-fought decision with his size advantage. For that reason, I do see value on the California native at +135.

Viviane Araujo aims to avoid two-straight losses for the first time in her career when she battles Montana de La Rosa in the women’s flyweight division. Despite Araujo being the favorite, I do see value on de La Rosa as the underdog at +155 here’s why.

Araujo (8-2) is coming off her first loss in the UFC after suffering a unanimous decision setback to Jessica Eye in December. The 33-year-old ha won 5 of her last 6 fights, with four of those wins coming by stoppage.

De La Rosa (11-5) defeating Mara Romero Borella by decision in her last fight in February and boasts a 4-1 UFC record.  The 25-year-old has won eight of her 15-career fights by submission.

I’m not sure why de La Rosa is the underdog here as she’s younger, more active, and has a slight height advantage in the matchup. Her lone loss in the Octagon was against #9 ranked flyweight Andrea Lee, where she lost by decision. Since moving up to the flyweight division in 2017, the Texas native is 4-1 in her career.

The Ultimate Fighter 26 veteran has only lost to top competition in her career including Lee, former flyweight champion Nicco Montano and Cynthia Calvillo. In addition, she’s now training at a proper camp in Elevation Fight Team, where she gets more women training partners. Look for De La Rosa to threaten with a submission or potentially win another decision victory here. But I do