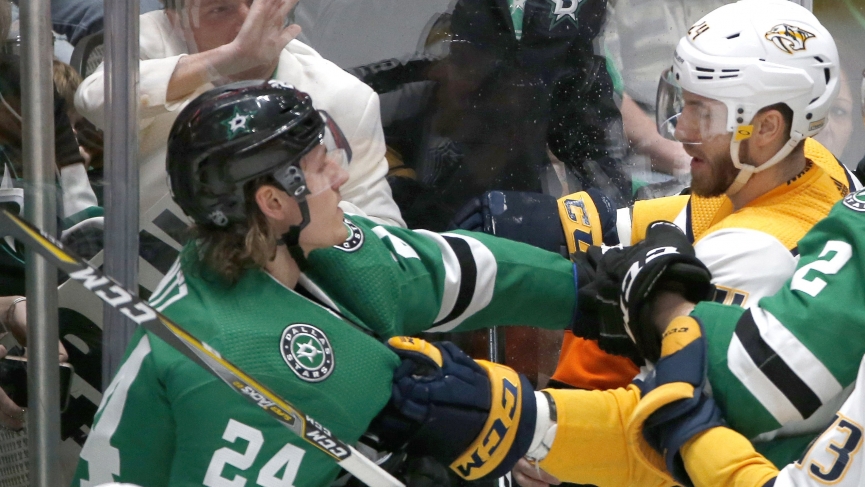 The Dallas Stars who’s NHL odds are priced at around +1800 to win the Stanley Cup are the next team to go under the microscope in our Fact or Fiction NFL Odds series. Dallas showed promise at the beginning of the season but that quickly changed as the season progressed.

Besides Off The Ice Issues, Stars Futures Odds Remained Steady

The Dallas Stars had high expectations entering the season after a resurgent 2018-2019 campaign in the first year under rookie head coach Jim Montgomery. Dallas knocked off the Nashville Predators in the first round last year and took the eventual Stanley Cup champion St. Louis Blues to the limit before bowing out in a very tough, hard-fought seven game series in the second round.

After a return to the playoffs and near conference finals appearance last season, the Stars were looking at greater achievements this season. Unfortunately, the Stars sputtered big time in the first two weeks of the season as they opened up 1-9 in their first 10 games. Dallas had a hard time scoring goals during that span as they were held to 2 goals or fewer in seven of those games.

The Stars managed to get their game back on track as they reeled off a strong 14-2 streak in 16 games following their rough start and that run put Dallas back in a playoff spot and among the top 3 teams in the Central Division along with St. Louis and Colorado. Bettors that had the Stars as part of their NHL futures portfolio drew a sigh of relief at that point. The Stars had a nice turnaround following their slow start in spite of the fact their head coach unbeknownst to anyone was battling some significant personal demons. Jim Montgomery was suddenly and shockingly fired by the Dallas Stars in December but at the time, the details of why he was let go were not revealed. It was a stunning development considering the meteoric rise of the Dallas Stars during Montgomery’s tenure behind the bench. After all, he guided them to the second round of the playoffs in his first year.

Weeks later, it became public knowledge that Montgomery was fired due to alcoholism and severe drinking problems. The team gave him several chances to reign in his struggles with alcohol but Montgomery was never able to which led to his dismissal. Assistant coach Rick Bowness became the interim head coach and in spite of the ordeal with their recently fired head coach, the play of the team on the ice never waned as Dallas had a solid 9-4 record in the immediate aftermath of the Montgomery dismissal.

The break in the season was ultimately not something any NHL team wanted but certain teams were in desperate need of hitting the reset button due to struggles at the time the season was suspended due to COVID-19 and the Dallas Stars are one of those teams. They fell out of their 1st place battle with St. Louis and Colorado during a period of time which saw Dallas really play some bad hockey as they went 2-8 in 10 games prior to the season being stopped. The early season offensive woes came back with the Stars scoring a grand total of 3 goals in the last four games they played before the season was shut down. 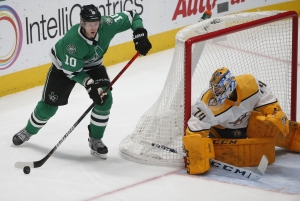 Dallas was a very stingy and strong defensive team as they gave up a paltry 2.5 goals per game ranking them 2nd in the NHL in that category. However, their offense wasn’t up to par with many of the playoff-caliber teams in the NHL who had the scoring depth and firepower to light the lamp and score in bunches. The Stars were just 26th in the NHL in goals per game at 2.6 per contest and in their two worst slumps of the season in October at the beginning of the season and in the games prior to the season being stopped, their inability to score goals at crucial times came back to bite them as well as their power play which didn’t produce at a consistent level.

Final Verdict – Shoot For Stars Profit From Some Futures Betting

Dallas sat 3rd in the Central Division when the season was halted but they were sitting just 2 points ahead of Winnipeg and 4 points ahead of Nashville. The Stars were in a playoff position but they weren’t comfortable and secure in a playoff spot at the time as they were earlier in the season. That being said, Dallas is one of the league’s absolute best teams at the defensive end of the ice. They have a very deep and mobile defense that plays well in their own zone in terms of positioning and attention to detail plus they usually get great goaltending from their #1 goalie Ben Bishop. That kind of quality and attribute in a team goes a long way toward success and an extended playoff run. It’s what got them nearly to the conference finals last season and it’s what would give the Stars a chance at another lengthy playoff run this season.

Dallas added veterans that have plenty of playoff experience like Joe Pavelski and Corey Perry last offseason to add depth up front to the likes of Jamie Benn, Tyler Seguin, Roope Hintz and Alex Radulov which should greatly enhance this squad come playoff time. There is no doubt the Dallas Stars offense and getting consistent goal-scoring is like a ticking time bomb. You never know when the bomb will go off but as long as they play the sturdy brand of shutdown hockey they have become accustomed to, they will be a tough out for any playoff opponent. Dallas was my preseason Stanley Cup champion and I’m not going to abandon ship with them now. I would recommend taking a piece of the Stars at a +1800 futures price to win the Stanley Cup which is actually a better price now than you would have gotten with this team before the season.