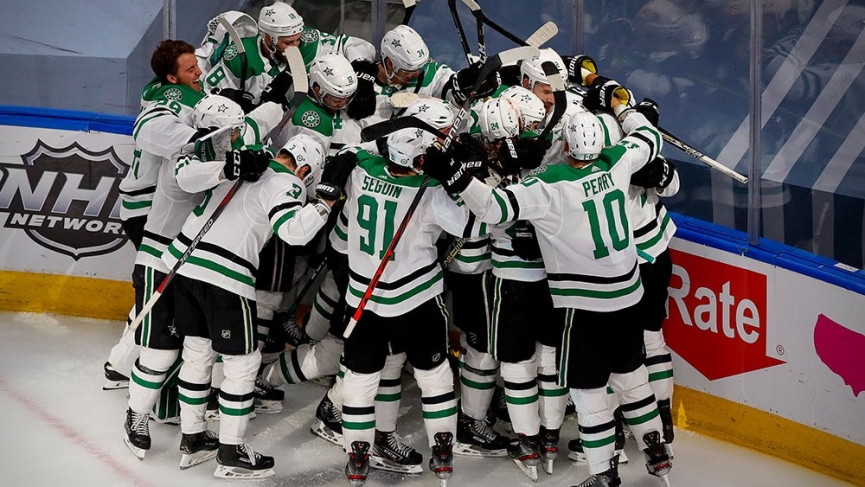 Odds.com’s Dallas Stars vs Tampa Bay Lightning Pick – Stanley Cup Final Game 2: Dallas has won 6 of their last 7 playoff games, while Stars’ goaltender Anton Khudobin has a 13-6 playoff record, with a .923 save percentage. The Stars head into game 2 with a chance to go up 2-0 on the Tampa Bay Lightning, putting them just two wins away from lifting the Stanley Cup.

The Dallas Stars incredible ride through the NHL Stanley Cup Playoffs continued in Game 1 of the Stanley Cup Final on Saturday night as they defeated the Tampa Bay Lightning 4-1. The recipe implemented to win games against the Vegas Golden Knights in the West Final was on full display in the Game 1 win against Tampa Bay. The Stars allowed 36 shots, but not all of them were high-quality shots as they kept the Lightning to the outside, and away from those prime scoring areas, and when they did get great scoring opportunities, Anton Khudobin once again as he’s been throughout these playoffs was there in net for the Stars to make the big save, and keep the puck out of the net.

For the first two periods of the game, Dallas seemed to be the faster team and the fresher team as they won the majority of the battles for loose pucks. Dallas had four days off after knocking off Vegas in the Western Conference Final while Tampa Bay had a less than 48-hour turnaround for Game 1 of the Stanley Cup Final after defeating the NY Islanders in Overtime of Game 6 to wrap up the Eastern Conference Final, and the difference was very noticeable early in the game.

Dallas was beating Tampa Bay to every puck and garnering plenty of time in the offensive zone. The Stars didn’t allow the Lightning to control, and dictate the play outshooting them 18-14 in the opening 40 minutes, and taking a 3-1 lead in the process. However, the tide turned in the 3rd Period as Tampa Bay swarmed Dallas holding a 22-2 edge in shots on goal as they tried to get back into the game, but the Stars thwarted every opportunity the Lightning got, and Stars goaltender Anton Khudobin was outstanding making several big saves to preserve the lead, and the eventual victory. He now has a fantastic 13-6 record in the postseason with a .923 save percentage, and 2.54 goals-against average.

Getting To Know You

Dallas presents a lot of similarities for Tampa Bay as their previous opponent the NY Islanders did. Both teams are defensive-minded and good in their own zone, but the Lightning still made note of some subtle differences in the style of play between the two teams that caught them off guard in Game 1. Tampa Bay forward Tyler Johnson: “The Islanders, they kind of sat back. Dallas was in our face on the blue lines. I think the first two periods we were kind of forcing it a bit too much, trying to make those entry passes where I think our recipe is getting it deep and working. We had to adjust. We had to adjust against Boston as well. We’ve just got to keep doing that, grind and play our game and go from here.”

Tampa Bay did sit back too much early in Game 1 although part of it was being worn down from the end of the previous series on Thursday night, and Dallas having more rest prior to Game 1. Tampa Bay didn’t draw a single penalty in the opening two periods, and that is usually a sign when the Lightning aren’t clicking, and on top of their game. Tampa Bay’s offensive depth is strong featuring three very capable lines that can score goals and often they use their precision passing, and puck movement along with the immense amount of skill their top nine forwards have to not only generate scoring chances but also penalties from the opponent. Tampa Bay wasn’t doing that as much in Game 1 because they didn’t have the puck as much.

If Dallas is going to continue having success in this series, a great place to start would be duplicating their defensive effort against the Tampa Bay top line which features Brayden Point, Nikita Kucherov, and Ondrej Palat. The trio was held off the scoresheet in Game 1 and failed to register a single point between them. The second line was also pointless in the loss for Tampa Bay in Game 1. That simply must change starting right here in Game 2 for the Lightning if they are going to even up this series on Monday night.

Dallas took advantage of a Tampa Bay squad that wasn’t quite as prepared for them in Game 1, and you would think the Lightning will be much stronger from the opening puck drop in Game 2. I expect a much better performance from the Lightning here coming off a loss which is exactly what we’ve seen from Tampa Bay throughout the Stanley Cup Playoffs following a setback. Tampa Bay is a perfect 4-0 in the playoffs after a loss, and they will likely maintain that unblemished record here in Game 2. You can make a good argument that Dallas at a very attractive underdog price here is the value side to wager on given they were victorious in Game 1, and they have a very strong defensive game complete with a red hot goalie going for them right now which won’t be an easy combination for Tampa Bay to solve.

That being said, the “value” side isn’t always the winning side. Tampa Bay has been excellent at making adjustments and playing better each time they’ve lost a game. They’ve got a good defense of their own, and a great goaltender as well in Andrei Vasilevskiy yet they have more offensive weapons and game-breakers than Dallas. Those weapons were silenced in Game 1, but don’t expect them to be held down for two straight games. It’s a bigger price than I normally prefer to lay, but I will bet Tampa Bay here in Game 2 at -150 to even up this series. I’m passing on the total. There were only 14 high danger scoring chances in Game 1 between the two teams combined which leads me to believe this could be a lower scoring Game 2, but you won’t find me betting under when the total is 5. The best current price on the Lightning is at -143 via DraftKings