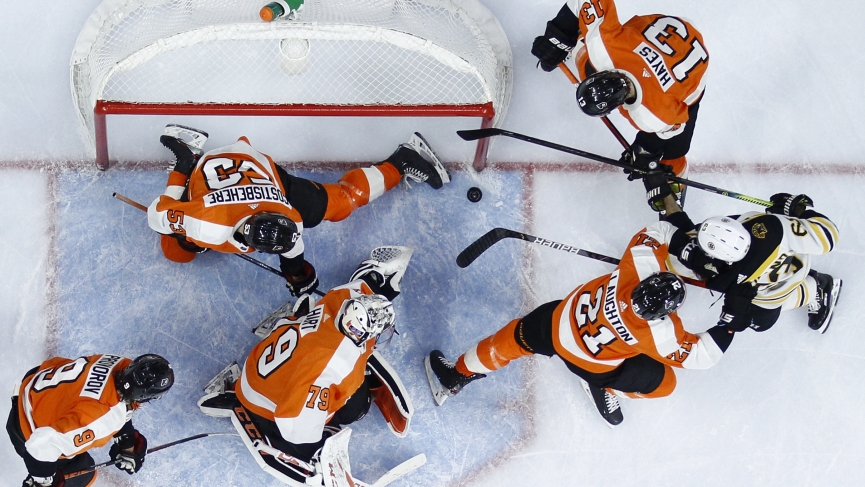 If you have watched hockey in the slightest bit over the course of the 2020 NHL season you would probably have an automatic answer to the question “who is the best team in the NHL this year?”

The answer is simple. It’s the Boston Bruins, and has been all season.

So, the Bruins are Stanley Cup favorites with a current payout of 6 to 1 (+600). What does this mean to you? It means a few things, but more than anything else it means you should place your bets right now if you have any sort of belief in this team.

Typically, +600 is not the type of payout to get me to jump out of my seat and race to the betting window. However, since we are all lucky enough to be able to stay in our seats while placing bets on our phones, this is one future worth your consideration.

In all seriousness though, the Bruins are very good. Like extremely good. And the fact that you can even get them at 6-1 is sort of astounding to me. This is a Bruins team who has torn through the NHL all season long. They were winners of 44 games and were the only team to reach 100 points despite being forced into OT 12 times.

Another scary component of this team is that they have been excellent no matter where they play. This is obviously a huge advantage in the playoffs. They were the only team in the NHL to win over 20 games both at home and on the road, and were owners of five different winning streaks of five games or more.

I remember this game and I remember ending up in Twitter Jail twice that night and also how the microphone picked up every single swear too and it was glorious #Bruins pic.twitter.com/i0b9AKBQV5

They also dominate on both ends of the ice, ranking top-10 in every offensive and defensive category except one. They were ninth in goals scored, tenth in shots on goal, second in power play conversion, and seventh in faceoff percentage.

It doesn’t stop there. Beyond the unmatched play by their likely Vezina Trophy recipient between the pipes, the Bruins collectively play some of the best defense in the league. This includes the fewest goals allowed per game (2.39), and the eighth fewest SOG.

Maybe the most telling of these stats is the incredible efficiency of their penalty killing unit who have warded off 84.2 percent of opponents powerplay chances. That was good enough for third in the league, and was made possible, in part, by the team’s commitment to staying out of the box.

The Bruins often have a reputation of playing dirty, and you won’t be hard pressed to find someone of the opinion that they get away with more than any other team in the NHL. Regardless, the Bruins managed just 9.7 penalty minutes per game this year. There are only five teams who averaged less.

All this and we haven’t even gotten to the most impressive part of the Bruin’s season yet!

Incredible hockey teams need incredible efforts from the most important position on the ice. This is what the Bruins have had all season long in the form of Tuukka Rask.

The 33-year-old goaltender was in the midst of the best season of his 13-year career. While posting a record of 26-8 he led the NHL in goals against average at 2.12, was second in save percentage by one one-thousandth of a point (9.29), and earned five shutouts.

Earlier in the season I would have recommended you place a bet on him to win the Vezina Trophy, but at this point it is not really worth it as you would be getting slightly over even money (+120) compared to the +1800 odds he carried just a few months ago.

It may seem like the Bruins did/could do absolutely no wrong this season. Though they have been amazing, this is just simply not true. No team is ever perfect over the course of an 82-game season. The Bruins did struggle through the month of December, going just 4-11 over a period of about four weeks. If you ask me, that fact just makes all of these stats even more impressive.

Do not worry about the struggles. By the time the NHL gets started again, they will have happened long, long ago in a Corona-free galaxy far, far away.

No one knows exactly how the extended lay-off with effect teams once they finally hit the ice again. What I do know for sure is that the Bruins have been the best team wire to wire. They started the year as +1025 favorites, and somehow have only come down about 400 points.

They absolutely will not lose in the first round, so these are the best odds you are going to get.

Take advantage of sportsbooks offering this 6-1 opportunity, and just be thankful you aren’t betting on the NBA where the top three favorites are not offering even half the return.