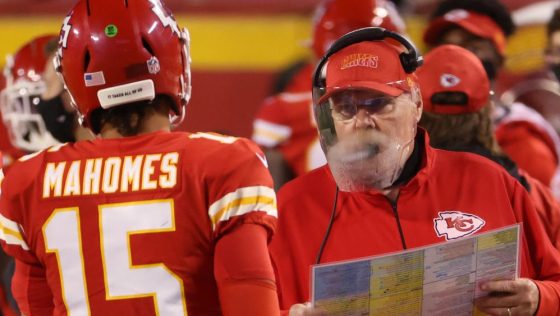 The Chiefs are known for their offensive prowess led by reigning MVP quarterback Patrick Mahomes. However, this season, the dominant force is the emergence of the Chiefs defense that ranks among the Top-5 in many of the meaningful performance measures.

The improvement has been a change to a far more aggressive attack from the defense. This season the Chiefs defense is bringing many different-looking blitzes on 40% of the plays run, which ranks 6th in the NFL. On the surface, the blitz percentage of plays defended does not reveal how significant these pressures have been in any down and yardage situation. the number and percentage of quarterback hurries, quarterback hits, and sacks illustrate the effectiveness of the blitz schemes accurately.

he number of sacks by a defense has defined them as a unit for decades. The Chiefs rank 5th in the NFL recording 12 sacks on the season, which is an outstanding amount through four games.

Overall, the combined pressure metrics show the Chiefs have pressured the opponent’s quarterback a total of 44 times or an average of 11 times-per-game and accounts for 29% of all plays defended. The defense has played at a high-level and as a result the explosive offense has been able execute at an even higher level than last season.

The Raiders Defense Will Not Contain the Chiefs Scoring Machine

The Raiders defense has made far too many mistakes in coverage, gap assignments, and pre-snap mental mistakes that has led to losses. The Raider rank 26th in the NFL allowing an average of 6.2 yards-per-play and 24th in scoring defense allowing 120 points or 30 points-per-game on the season. Defensive performance measures this poor will be fully exploited by a creative offensive genius like Chiefs head coach Andy Reid.

Defenses Must Pick Their Poison

Opposing defenses have chosen not to get beat deep by the vertical threats of Tyreek Hill. Sammy Watkins and others. This strategy has been a success if your goal is not to give up big play passing touchdowns. The system has been highly ineffective because Mahomes simply checks down to shorter pass routes underneath the linebacker coverage and routes that have a high percentage of being completed. As a result, the Chiefs rank second in the NFL, averaging seven plays-per-drive, averaging 41.6 yards-per-drive, and scoring on 51.3% of their drives.

The machine learning models project that the Chiefs will score at least 28 points and gain a minimum of 400 total offensive yards. In past games in which the Chiefs under head coach Andy Reid have met or exceeded these performance measures, have earned an outstanding 23-8 SU record for 74.2% wins and a 20-9-2 ATS record good for 69% winning bets. If they achieved these performance measures in a home game, they have earned a 13-1 SU record for 93% wins and an 11-3 ATS record for 79% winning bets that covered the spread by an average of 10 points.

In games played on the roads in which the Raiders allowed 28 or more points and allowed 400 or more offensive yards, they have gone to a terrible 6-30 SU record for 17% wins and a 10-26 ATS record for 28% winning bets that failed to cover the spread by an average of 11.5 points.

Take the Kansas City Chiefs minus the points and expect a 20-point margin of victory.