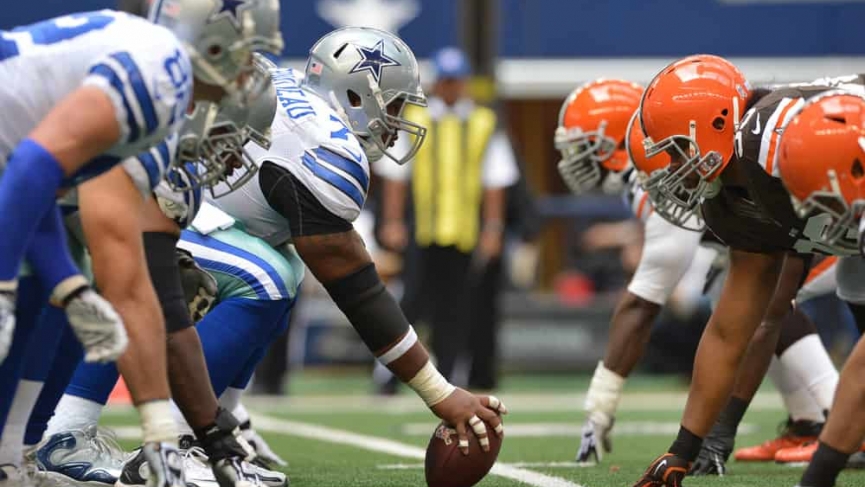 The 1-2 Dallas Cowboys will host the 2-1 Cleveland Browns in Arlington, Texas looking to get back to a 0.500 record on the season. Before the season started the expected records for this pair of teams would have been opposite with the Cowboys owning the 2-1 record. Such is the NFL we know and love so much.

The Public is on the Cowboys at a price of -5 and that is not surprising given that the Browns have been a dysfunctional franchise for most of the past decade. 68% of more than 1200 betting tickets that I track from 20 different sportsbooks are on the Cowboys and 87% of the total money bet on this game. So, we have the public and the larger betting professionals on the same side. This is not unusual, and it is not reflecting an extreme betting flow that would warrant a contrarian bet supporting the Browns.

The total is currently priced at 56 points with the number of tickets evenly spread between the ‘OVER’ and the ‘UNDER’. However, 74% of the total money bet on the total is on the ‘UNDER’ and that is a starting point that the ‘UNDER’ may be a solid betting opportunity.

The Cowboys could have been 0-3 on the season had it not been for an incredible comeback on the road against the Atlanta Falcons in Week 2. It can be reasoned too, that they might have been 3-0 if a few breaks had gone there way. The one certainty is the Cowboys offense is quite good and will be difficult for any defense to contain this season.

The Cowboys have tallied 1,472 yards or 490 yards-per-game and ranks best in the NFL by 100 total yards over the second-best Green Bay Packers. While it is unlikely that the Cowboys will be able to maintain a near-500 yards-per-game offense, they will have few games in which they will not gain a minimum of 375 offensive yards. Despite all the yards gained they have scored 88 points that place them 8th in scoring offense.

Turnovers at critical points in scoring drives have been a problem for the Cowboys, but one that can be corrected. They rank first in the league having run 236 offensive plays on37 total drives. They have suffered a turnover on 16.2% of their drives ranking fifth-worst in the NFL. By way of comparison, there are four teams in the NFL that have a turnover percentage under 5% of their total drives and includes the Kansas City Chiefs (3.4%), the San Francisco 49ers (3.2%), the Tennessee Titans (3.0%), and the Green Bay Packers, who have yet to have a turnover. The Cowboys will have a greater focus on ball handling and as a result, their scoring drive numbers will increase while the turnover measures decline.

A Betting System on the Total

Here is a highly profitable and simple to use betting system that has earned a 68-33 ‘UNDER’ record over the last 10 seasons. The system instructs us to bet ‘UNDER’ with home teams that have allowed 24 or more points-per-game and are coming off two consecutive games allowing 17 or more points in the first half of each game.
The Cowboys have allowed an average of 32 points-per-game and have allowed Seattle to score 23 points in Week 3 and allowed 29 points to the Falcons in Week 2 and confirm the requirements mandated by the betting system.

The betting lines imply a Cowboys win by the final score of 31-25 given the 56-point total and that the Cowboys are 5-point home favorites. The models project that Dallas will score 28 or more points in this game. The Cowboys are a solid 50-15 straight-up (SU) and 47-18 against-the-spread (ATS) for 72% winning bets when scoring 28 or more points in games played since 2010. In games in which they scored 28 or more points and were installed as 3.5 to 7.5-point favorites, they are 27-6 SU and 24-9 ATS for 73% winning bets that covered the spread by an average of 6.4 points.