How To Bet the Philadelphia Eagles in The 2020 NFL Draft 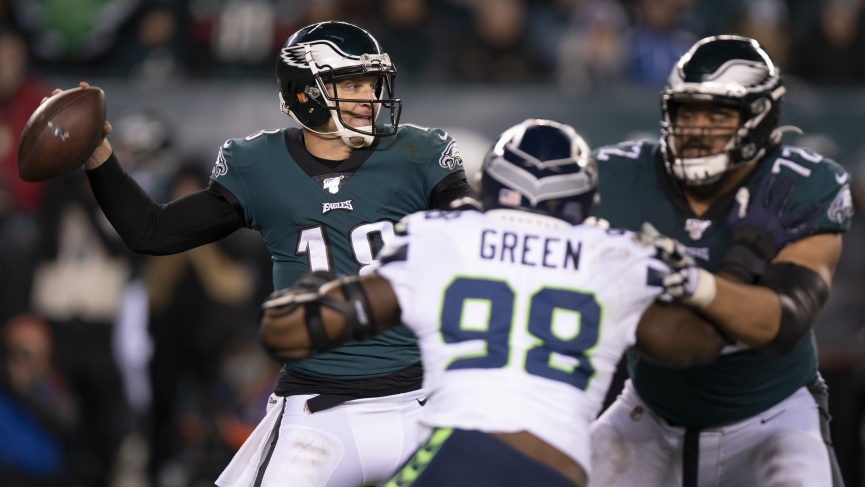 The Philadelphia Eagles had one of those what-if seasons in 2019. They made the playoffs, finishing 9-7, good enough for an NFC East title and a Wild Card weekend game against the Seattle Seahawks. They lost their starting QB, Carson Wentz, to a concussion during the first quarter of what ultimately turned into a 17-9 playoff loss.

That game was a microcosm of the team’s season. Wentz was knocked out of the game, so the Eagles played next-man-up football as grizzled veteran Josh McCown came in and did all he could; it just wasn’t enough to keep the Super Bowl pursuit alive.

Looking at the box score from that game, the players that caught passes would make any Eagles fan and/or bettor raise an eyebrow. Two tight ends, in Dallas Goedert and Zach Ertz, led the way, and then it’s a mish-mosh of names including Greg Ward Jr., Boston Scott, and Deontay Burnett. In contrast, the team’s Week 1 box score included DeSean Jackson, Alshon Jeffery, Nelson Agholor, and Darren Sproles. This juxtaposition could be a sign of what the Eagles will ultimately do with their first-round pick in the 2020 NFL Draft.

What Will Be the Position of the Eagles First Selected Player?

The injury bug that the Eagles caught, specifically at the wide receiver position, is seemingly pushing oddsmakers to believe that’s a hole that Philly will try to fill at pick No. 21. So much so that the position is the odds-on favorite for the Eagles’ first selection. I honestly can’t find a single mock draft where Philadelphia doesn’t take a wide receiver in Round 1. 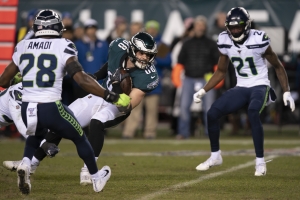 With the odds heavily favoring wide receiver and the expert mocks saying the same, the -230 odds are reasonable as long as you’re willing to risk two-plus times what you ultimately might win. The Eagles picking a wideout is the favorite on book after book after book with longshots in linebacker (+500), cornerback (+650), and safety (+850) being the only options coming in at less than 10-to-1 odds.

Wide receiver is such a heavy favorite here that, if you have the bankroll, betting on the Eagles to take a WR with their first pick makes a lot of sense.

Who Will Be the First 2020 Draft Pick by the Eagles?

And if the Eagles are going to take a wide receiver, we then need to get into the mind of GM Howie Roseman to figure out where we can make some real money by placing a wager.

Looking at that, along with Jefferson’s over/under prop, this truly points to the LSU product ending up going to the Eagles with their first pick. His O/U is set at 21.5, so the bookmakers are using Philadelphia’s pick (No. 21) as the line in the sand. Taking the under and the -192 odds means if the Eagles do select the wideout that you win the wager; the over remains the underdog here at +150.

What’s most likely come Thursday is that Jefferson is the clear best wide receiver left when it’s the Eagles turn to pick, and Philadelphia fills what’s seemingly its biggest need with a first-round selection. That, along with Jefferson’s odds, is a match made in a bettor’s heaven.

However, there are a few very well known experts that have Ruggs going the Eagles at pick No. 21. Personally, I don’t think he lasts to the 21st pick. Ruggs’ over/under is -110 on both sides at 13.5. For him to fall seven-plus picks from the line is extremely unlikely. I could see the Eagles trading up to get Ruggs, something that makes his +750 odds a nice boom from a sports betting perspective if you want to place a wager on both him and Jefferson.

If Jeffery and Jackson come back healthy (there are rumors of both being shipped out of Philly), the addition of Jefferson or another top WR would give the Eagles a scary skill position grouping. The Eagles picking a WR looks to be a shoo-in, but betting -230 odds makes it a tough pill to swallow. That points me to betting on a specific player, and that we can get plus odds on the guy that is seemingly going to be the pick, it’s hard not to take the bait.

Cross your fingers and know it’s going to be Jefferson joining the Eagles come draft day. Make that money, my friends.