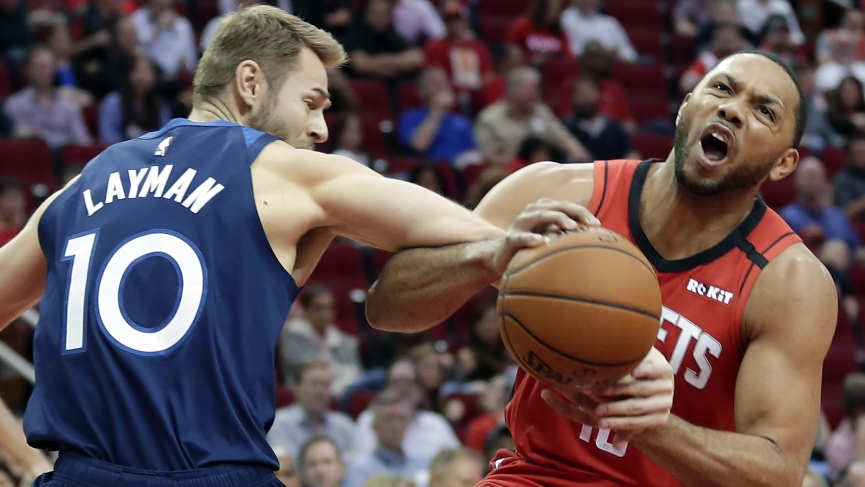 After this coronavirus mess clears up and when NBA players finally return to the court, there’s no question this will be a different league. So before you choose your NBA Picks on who will win the 2020 NBA Finals, there are two huge factors that will affect each and every team: 1) The likelihood of playing in front of no fans and 2) Rest. Soooo much rest. Chris Paul of the Oklahoma City Thunder has already admitted he has not taken a single jump shot since the coronavirus suspended the league on March 12. It sounds like he is very well-rested. Right before the suspension, L.A. Lakers star LeBron James talked about how he would not play without fans present. He later backtracked on those comments but everyone knows what he was getting at.

Along with considering those factors, let’s look back on how these teams were playing in early March and also sprinkle in some previous championship performances as we break down their NBA odds for winning the 2020 NBA Finals.

Just before the shutdown, the best team in the NBA finished a weekend that showed it was ready for prime time as LeBron pushed his way back into the MVP picture after leading the Lakers two big wins over both the Bucks and Clippers. Then the league went dark and the timing couldn’t be worse for the Lakers. But it doesn’t matter. Anthony Davis is unstoppable and if he’s given the chance to play for a title, James will not be denied. Even if they don’t pick up right from where they left off, the Lakers are still the best team in the league. If the NBA season was played five times, there’s no doubt in my mind the Lakers would take two of those titles. Probably more. 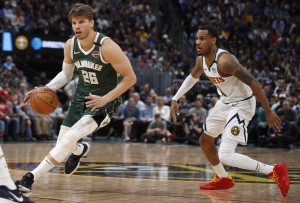 They may very well finish with the best record in the Eastern Conference, but I’m not sure the Bucks can win it all. Will reigning MVP Giannis Antetokounmpo actually deliver when it matters most? The Greek Freak has not proved it yet. He came up short in critical playoff moments last year, particularly in the Eastern Conference Finals against the eventual-champion Toronto Raptors. It’s because he cannot do it all by himself. Veteran Eric Bledsoe has dealt with several injuries all season and was shelved with a bum knee right before the league went on hiatus so his status moving forward will weigh heavily on this bet.

The Clippers won the offseason by landing Kawhi Leonard fresh off his NBA title and the high-scoring wing Paul George through a trade. They followed it up by entering the regular season as favorites to win their first NBA championship in franchise history. But that feels like it was a decade ago. The Clippers have a lower chance than the Bucks to make the finals but have a better chance than Milwaukee to win the title. The reason for that is their cross-town rivals. If they can dispatch the Lakers in the Western Conference finals, winning their very first NBA title should be no problem at all.

Ready to knock off the big dogs and cash your NBA picks?

Mike D’Antoni has been at the helm in Houston for the past four years and the Rockets have zero Western Conference titles to show for it. Winning the West isn’t the biggest issue here — D’Antoni has not reached the NBA Finals in 15 seasons as a head coach with four different franchises. They shipped out Russell Westbrook in exchange for Chris Paul in the offseason but trading away Clint Capela, the team’s only post threat and best defender, has been a step backward. The Rockets went 8-6 since the move and were trending downward heading into the hiatus, with losses in four of their last five.

Many thought the exit of Kahwi Leonard would leave the Raptors dead in the water, but that has not been the case. Kyle Lowry provides leadership while All-Star power forward Pascal Siakam is among one of the league’s rising stars. The Raptors had the second-best record in the East prior to play getting suspended but they’re not pushing the top dogs around. Toronto’s record against teams with records .500 or better is an uninspiring 10-13, while the Raptors are 8-6 in games decided by one possession or in overtime. 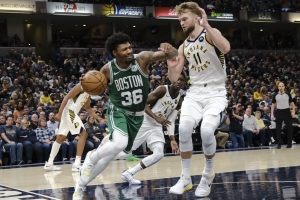 Things are looking up in Boston and a lot of that has to do with Jayson Tatum, who was the Eastern Conference Player of the Month after scoring 30+ points in four straight games to end February. This team has a solid rotation and has proven that it can surge in the postseason without certain star players (Ahem, Kyrie). If Kemba Walker gets back to full speed after his knee injury, the Celtics will likely enter the Eastern playoffs as the biggest threat to Milwaukee and could be a dark horse in the NBA Finals.

The Miami Heat has been making moves and it has been paying off. They made a big sign-and-trade deal during the offseason in landing All-Star Jimmy Butler as he has transformed Miami into a major surprise in the East. They also made a trade before February’s deadline, landing Andre Iguodala and Jae Crowder from the Memphis Grizzlies. Iggie could be useful down the stretch on defense while Crowder has already made early strides. If the playoffs started today, the Heat would be the East’s No. 4 seed and at 20 to 1, they’re my favorite from this group to go all the way.

These guys should definitely be on your radar. Ben Simmons’ back could be healed up by the time the league starts up again while injury-prone Joel Embiid is getting extra rest and that is huge. Veterans like Al Horford and Tobias Harris will benefit from the time off, too. The Sixers have been a popular team at the betting window this year despite their struggles on the road. The general consensus is not if, but when? This is mostly because of what a healthy Sixers team did against Antetokounmpo and the Bucks on Christmas. When Philly is healthy and hitting its 3s — paging Ben Simmons — this squad can be very dangerous.

Denver Nuggets guard Monte Morris (11) handles the ball against the Dallas Mavericks during the first half of an NBA basketball game, Wednesday, March 11, 2020, in Dallas. (AP Photo/Ron Jenkins)

The Nuggets opened the season with the highest odds among all Northwest Division teams of winning the NBA Finals. Only problem? No NBA division has produced fewer championships than the Northwest, whose only title belongs to the 1977 Trail Blazers. All-star center Nikola Jokic has averaged a double-double this season but until they can get shooting guard Jamal Murray to take the next step, Denver does have the firepower or bench depth to knock off the L.A. powerhouses in the West.

The boys from Utah galvanized the league during a memorable 19-2 run earlier in the season but that surge came sandwiched between two poor runs. In fact, the Jazz has proved to be one of the more inconsistent teams and has not fared well against top talent. Utah is just 10-14 against teams with winning records and have the second-worst defensive rating in the league. Two of the team’s top players — Rudy Gobert and Donovan Mitchell — contracted the coronavirus and have recovered but reports about a fractured relationship between the stars doesn’t bode well for postseason success.

The Mavericks have returned to relevance in the Western Conference, with much of their success landing squarely on the shoulders of Luka Doncic. He’s been dropping close to 29 points a game for an offense that is the third-highest scoring in the league. They also added center Kristaps Porzingis in the offseason. While the Mavericks have taken a big step forward this season, they still need to be considered somewhat of a longshot in 2020. Beyond this season, however, is when these guys will really start to make some noise in the West.

This is your best value bet. If you’ve read this far, then you’re probably willing to hear me out. With the season now being suspended, the expected time off may allow Kevin Durant (Achilles) and perhaps even Kyrie Irving (shoulder) enough time to make their return from injuries. In addition, should the NBA cancel the remainder of the regular season and just go forward with the playoffs, then the Nets would qualify as the No. 7 seed in the East and would go up against the projected No. 2 seed Toronto Raptors. If this actually plays out, Brooklyn at 66 to 1 offers the very best value.

While the Thunder have been one of the most pleasant surprises in the league this season and have the look of a ballclub that is quite capable of pulling off an upset in the playoffs, their lack of a quality big man is a huge missing piece. Shai Gilgeous-Alexander, Dennis Schroeder, and Chris Paul — all point guards — are among the team’s top 4 scorers. They’re super fast on the perimeter but when it comes to the postseason, other quality teams will expose them in the frontcourt.

On the outside, looking in

All this time off should help Victor Oladipo, the Pacers’ best player, get sorted after finally coming back from a knee injury that had sidelined him since January 2019. But the injury bug continues to bite in Indianapolis as Jeremy Lamb was averaging double-digit scoring before he tore his ACL in late February. Malcolm Brogdon has also dealt with quad injuries. Until they can get healthy, the Pacers should not be considered a serious contender for the NBA title.

Not going to happen

Sacramento has finished below .500 in each of the past 12 seasons and are still in the midst of a seemingly endless rebuild. They are currently suffering through the longest playoff drought in team history (14 years) and are among 11 teams in the league to never win the NBA Finals.

It’s complete tank time for the Warriors after losing the 2019 NBA Finals to the Raptors. During the series, Klay Thompson went down with a serious knee injury. Kevin Durant then left in free agency and Stephen Curry has played in only five games this season after returning from a broken hand.