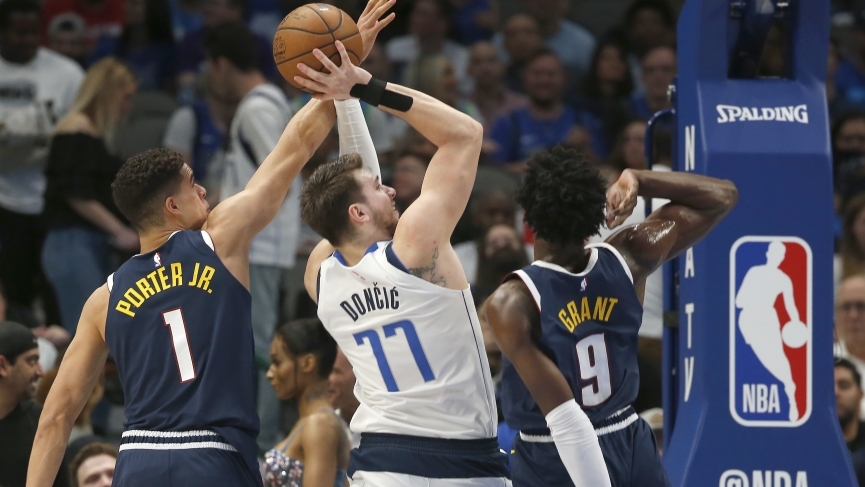 Will the Mavericks Win the NBA Finals?

Prior to the COVID-19 outbreak that suspended the 2019-2020 NBA season indefinitely, the Dallas Mavericks had a 40-27 record that was good enough to be the No. 7 seed in the Western Conference. Obviously, the Western Conference has more talented teams than the Eastern Conference, so getting out of those playoffs will be a lot more to overcome.
There are currently 10 teams that are numerically favored to win the NBA Finals over the Mavs. Of those teams, five of them are from the Eastern Conference – meaning that Dallas has much better odds than the No. 5 seed Oklahoma City Thunder (+1100/+800) and much worse than the No. 6 seed Houston Rockets.
Nonetheless, we can make an argument that this current collection of Western Conference teams is the best in NBA history. Not only would winning the NBA title be a long stretch but winning a playoff series would be incredibly tough as well.

What Has Gone Right for the Mavericks This Season?

Luka Doncic was in the midst of his second NBA season when all games were suspended indefinitely. Prior to that, the international sensation averaged a whopping 28.7 points, 9.3 rebounds and 8.7 assists per game in 54 contests. In addition, Doncic was leading the NBA with 14 triples – one more than LeBron James, four more than Nikola Jokic, and six more than 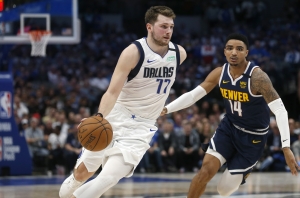 Russell Westbrook – and that was all while missing 13 of his team’s games.
Not only do the Mavs have a budding superstar in Doncic but Kristaps Porzingis has also lived up to the hype as well. Porzingis was landed in an uneven trade with the New York Knicks, who were looking to dump salary cap, last season in hopes of landing Kevin Durant and Kyrie Irving in free agency. Well, that was just as effective as a wet towel coming out of the shower. The Mavs essentially stole Porzingis away from the Knicks, and he has now gone on to average 19.2 points and 9.5 rebounds per game in 51 contests.
Dallas has really come a long way in acquiring players and also developing them as well. Seth Curry, brother of the two-time MVP, has been fantastic this season and essentially knocks down every open shot. Jalen Brunson, the second-year standout from Villanova, has come along has one of the key contributors on this team as well.

What Has Gone Wrong for the Mavericks This Season?

The level of competition in the Western Conference is holding the Mavericks back from being even better. However, that’s obviously something out of their control. With the way Doncic is playing, it won’t be long before even more players want to join Dallas and help this team win a title.
There were a considerable number of games missed by Doncic and Porzingis, but the biggest injury of all came when Dwight Powell was lost for the season with a nasty Achilles injury. Just as the rest of the season has gone, the Mavs rebounded from that injury and made sure they weren’t left without a big man to rely on. In a late-January trade, Dallas acquired Willie Cauley-Stein from the Golden State Warriors for only a second-round pick. Luckily for the Mavs, Cauley-Stein is under contract until the end of next season while only making $2.2 million. That’s a big round of applause you hear right now going out to Golden State.

How Will the Mavericks Fare at the End of This Season?

Assuming the NBA resumes its season and goes straight into the playoffs, the No. 7 seed Mavericks would match up against the No. 2 seed Los Angeles Clippers, who own a record of 44-20. As we mentioned earlier, this matchup against the Clippers would have been a difficult one to win – LA won each of the first two meetings against Dallas in the regular season.
It’s also worth noting that the regular season wasn’t finished just, so the Mavericks could have certainly improved their standing in the Western Conference – and potentially have gotten an easier matchup. Although easier would be a glass-half-full way of looking at things. There are only four wins separating the No. 2 seed Clippers and No. 7 seed Mavericks – in fact, the No. 5 seed Thunder and No. 6 seed Rockets also have exactly 40 wins.
At the end of the day, the Mavericks would probably lose to the Clippers. However, a matchup against the Denver Nuggets or Utah Jazz could possibly suit them better in the first round – which is probably as far as they’d make it.