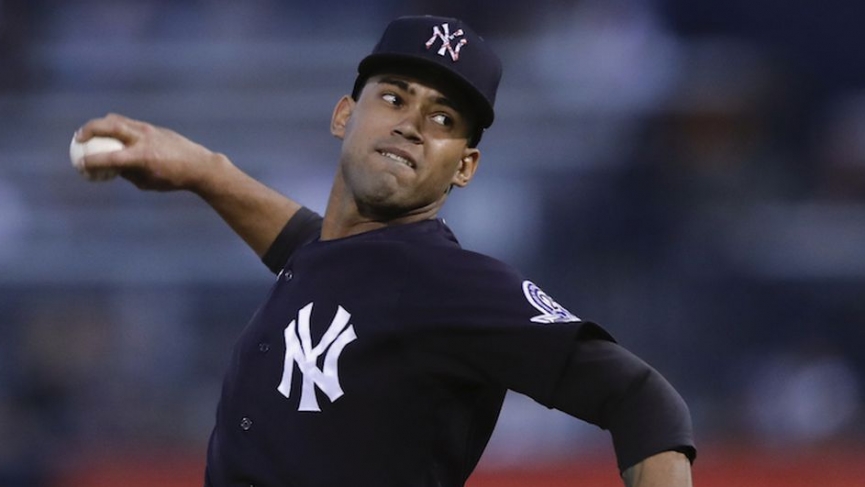 Odds.com’s MLB Best Bets Sunday: Sundays aren’t made just for football this time of year. The MLB season is coming down to crunch time and we’ve come up with a three-pack of picks for baseball bettors to consider, starting with one of the top rivalries in all of sports.

Is this a potential preview of young hurlers who are destined to meet for years to come as staff aces in baseball’s greatest rivalry? That alone is a good reason to tune into the early-afternoon broadcast on TBS to see the New York Yankees take on the Boston Red Sox.

New York has won 10-straight and is zeroing in on a postseason clinch. The Yankees still have an outside shot of catching Tampa Bay for the AL East title and will send Deivi Garcia (2-1, 3.28) to the mound today as -175 chalk at DraftKings. Boston counters with Tanner Houck (1-0, 0.00), and the contest is carrying a 10-run total.

Garcia has two of the wins in New York’s streak, the young Dominican besting the Blue Jays in back-to-back starts, first in Toronto and then five days ago in the Bronx. A 1st-round pick out of Missouri in 2017, Houck made his major league debut this past Tuesday in Miami, tossing five scoreless frames and whiffing seven.

No disrespect intended to the young Marlins lineup, but they’re not at the level Houck will face today in the New York batting order which has produced 57 runs in the last five games. It’s the first experience in this rivalry for both young hurlers, but it’s an easy pick for me to play the Yankees on the run line (-1½, -115).

While the Yankees have been scoring runs in bunches, the Houston Astros have been struggling at the plate. They’re also nursing a slim, 3-game lead over the Seattle Mariners for second place in the AL West, and could really use a win Sunday afternoon when they close out a home series with the Arizona Diamondbacks.

Scoring runs has been an issue for Arizona, and keeping runners off the plate has been a struggle for Bumgarner. The 31-year-old southpaw is coming off arguably the worst start of his career on Tuesday in Anaheim where the Angels lit him up for eight runs and 13 hits before Bumgarner could finish the sixth. Urquidy enjoyed a great assignment this past week against the Rangers, working seven frames and allowing just a run on three hits while striking out seven.

Houston hitters got to Bumgarner earlier this season when the teams met in Phoenix, but the Astros aren’t hitting anyone right now. I’ll be playing the ‘under’ 9½ in this one.

Wrigley Field under the lights on what should be a nice evening with ESPN’s cameras looking on? Count me in, especially with the mound duel we have in the series finale between the Chicago Cubs and Minnesota Twins.

Jose Berrios (4-3, 4.15) is slated for the Twins, and he’ll face Yu Darvish (7-2, 1.86) of the Cubs. FanDuel is carrying Chicago as a -152 favorite after the teams split the first two games of the set. As is the norm with games at Wrigley, the total has yet to be released, but we’re likely looking at 7½ when it does come out.

Minnesota became the fourth AL team to clinch a postseason spot with an 8-1 decision on Saturday, just the second win for the Twins in their last six games. Berrios pitched well enough to win his last time out with five innings of 1-run baseball against the powerful Chicago White Sox, but got no support in a no-decision. Saturday’s defeat stopped a 5-game Cubs win streak, and they’ve managed just two runs in the first two games against Minnesota. Darvish is one of the favorites for the NL Cy Young, Chicago winning eight of his 10 outings. He will be facing the Twins for the first time since 2014, and owns the 4th-best ERA in the majors (1.86).

This one definitely qualifies as a potential World Series preview, both teams sitting in the 12/1 to 15/1 range on baseball futures odds to win it all. The pitching matchup makes it easy to imagine a low-scoring game, something bettors should consider once the number comes out. I’ll be siding with Yu and the Cubs (-152) for my free MLB pick.