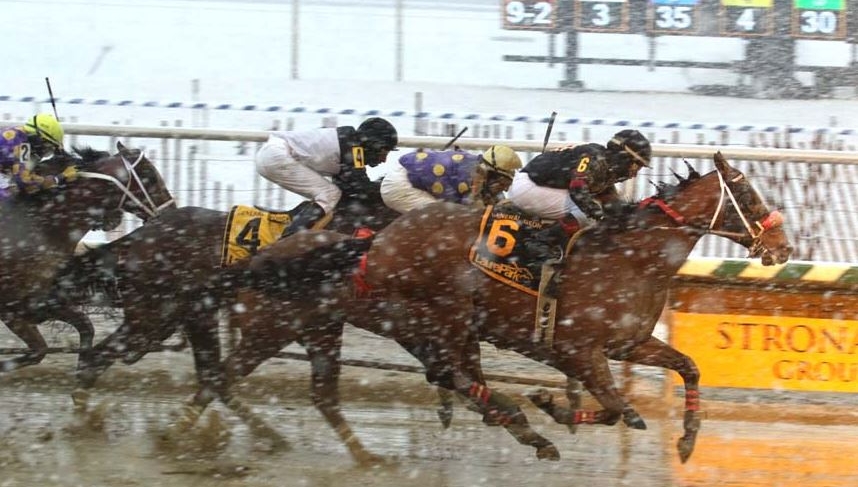 Odds.com’s Horse Racing Picks for Oct. 23rd: Today at the racetrack, racing continues everywhere and Woodbine leads the way with a competitive stakes race. Let’s look at some races:

The Laurel 8th is an allowance optional claimer for three-year-olds and up going six furlongs on dirt. I am against morning-line favorite Stroll Smokin who drew the rail and will likely be sent hard for the lead. He should be under pressure throughout however as the three horses to his outside all can keep him honest. Rock and Fellers might even be fast enough to get in front of Stroll Smokin in the early stages. Yes, Stroll Smokin has some rating ability as he showed two starts ago but consider he had an outside post that day where he could be clear of trouble.

One alternative is Awesome D J who lowers the evaluation slightly and note five of his six wins have come at Laurel. The only issue with him is he typically elects for longer distances and while he has tried today’s distance six times, he has yet to win at it.

The horse I prefer is Buddy’s Run (5-1 ML) who returns to Laurel after some failed attempts at Parx. Note he is 1/10 at racetracks not named Laurel and 3/5 at Laurel thus he should enjoy returning to these surroundings. He won his last start at Laurel four races ago and in that race, he was coming off an effort at Parx. Expecting a similar result in his return to Laurel this time around.

The Belmont 9th is an allowance optional claimer for three-year-olds and up going one mile on dirt. I am against even-money morning-line favorite Money Moves who last time was a non-factor in the grade one Kentucky Derby. Previously, he had won his first pair of races at Gulfstream against straight three-year-olds and was second-best two starts back in his first try against older horses. He can win but don’t think his form makes him the standout his morning line suggests that he is.

I am against Three Technique who won both his races going seven furlongs as a two-year-old and then was competitive in stake events at Oaklawn. After over four months off, he returned to the races three starts ago in a grade one and did very little running. Subsequently, he tried turf in his two most recent outings. He ran okay in those events but I am not convinced that he is the same horse that seemed to be improving every start last winter and early spring.

I am against Americanus who showed some promise when winning his debut and he was okay in his last start six months ago when finishing third in a minor stake. He has switched trainers since then to Claude McGaughey, who is having a terrific meet. He is still lightly raced and with the time off recently to develop and mature, I wouldn’t be surprised if he showed improvement. My issue with him is he has to improve significantly to be competitive in this spot while facing older horses for the first time. He is the second choice on the morning line thus he’ll likely lack betting appeal to find out if he’s good enough.

The horse I prefer is Expert (8-1 ML) who last year won multiple times at today’s distance and doing so with efforts that would make him competitive in this spot. This year you can ignore his race four starts ago, in a graded stake, off a nine-month layoff. Subsequently, the connections decided to try extended route races which didn’t work. He gets back to a one-turn mile, a distance he is repeatedly proven at thus he should provide a better effort today.

The Woodbine 7th is the Sweet Briar Too for fillies and mares three-year-olds and up going 6 ½ furlongs on synthetic. I am against morning-line favorite Painting who was all out last time to win the Ontario Fashion. Previously she finished behind Souper Escape, who also runs in this spot, in back-to-back races. Souper Escape was a perfect 3/3 at Woodbine until last time when she was sent off at 2/5 odds in the Belle Mahone and disappointed finishing third to Summer Sunday, who also runs in this spot. Perhaps Souper Escape rebounds in this spot but she was in the form of her life and that last race could be a sign that her form is declining. At an expected short price, I’ll play against her.

Summer Sunday successfully stretched out last time and now cuts back to sprinting something she has been successful at many times previously. While she has shown some rating ability previously, her best work has always been when being allowed to set the pace. That seems unlikely in this spot with O’Keeffe drawn directly to her inside and Victory Kingdom on her outside thus I’ll play against her.

One alternative is Amalfi Coast who did no running in the Canadian last time going nine furlongs on turf. Note last year after a nine-furlong turf race, she turned back to a synthetic sprint and won the grade two Bessarabian defeating Painting. That race proves that she is capable of beating these horses and she should get an honest pace to rally into.

The horse I prefer is Fair Maiden (12-1 ML) who scratched out of an event at Keeneland last weekend. She is proven on synthetic having broken her maiden at Arlington last year. After that race, she won a stake on turf at Woodbine and was a neck away from becoming a grade one winner. Her lone subpar effort came in the Breeders’ Cup Juvenile Fillies Turf where she had post 10. Last time, in her three-year-old debut, off a 10-month layoff, she dominated an allowance event on dirt. The versatile filly seemingly always runs well and making just her second start of the year, no reason why she can’t step forward and win this race.