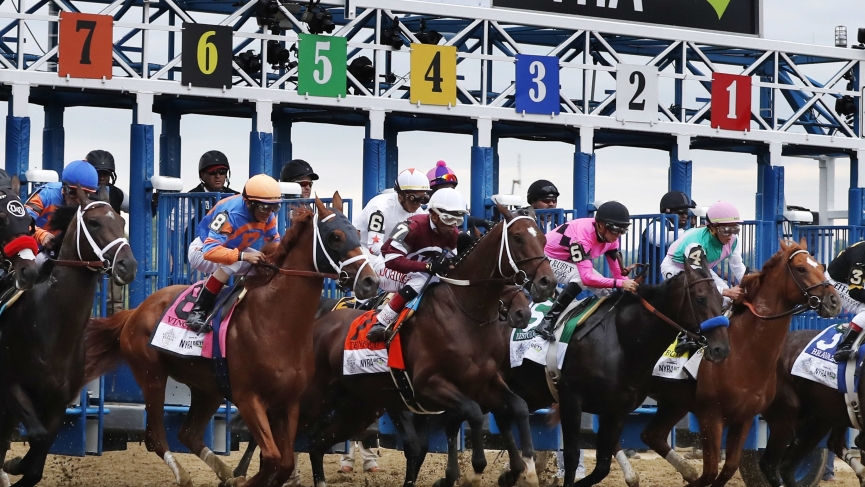 Belmont and Churchill Downs begin another 4 day week of racing. Belmont provides the feature, the Flat Out stake which we will look at along with the Belmont 1st and Churchill 9th.

The Belmont 1st is a $40,000 maiden claiming race for 2-year-olds and up going 6 furlongs on dirt. Eagle Palace is your morning line favourite and he has raced as a 2-year old sprinting on dirt against better horses that would be competitive here. That said though he showed more in his 2 starts this year. Both were on turf, going a route and dropping out of maiden allowance competition. You could also say he just improved from 2 to 3 but at a short price, I’m not that curious to find out if that’s the case.

Point of Humor has run predominantly on turf but 2 back he ran on dirt. It was a good performance but he got a great trip skimming the rail and he is 0 for 13. He’ll beat me. Perhaps Brees Bayou can win off a 16-month layoff but I wouldn’t count on it. He showed good early speed the last time he was seen, but with Ink Splotz in this race, a speed approach likely won’t be the best one.

The horse I want is Tri Saint Lorenzo (10-1 ML) who will be running for a tag for the first time. Like that he finds a different group here as he was previously finishing behind the same horses in New Frontier and Fast Break. Also, Tri Saint Lorenzo has previously had issues getting out of the gate and I didn’t notice any from his last race. A better start can lead to better results and even help Tri Saint Lorenzo find the winner’s circle.

The Flat Out is a 1 3/8 miles race for 4-year-olds and up. Sir Winston returns to the scene of his biggest win in the grade one Belmont Stakes (where he got a perfect trip) and is your morning-line favourite. I’m against him as for the first time in his career he’ll be under 4-1 and he’ll likely be favoured. He is also closer in a race that doesn’t have a lot of pace and outside of his Belmont win, which of his other races really stand out?

The other closers in this race also have plenty of class like Rocketry and Adventist. Of course with Rocketry it’s back class as we did not see his best at any point last year. Adventist has plenty of recent races that would be competitive though he has yet to hit the board in any of his Belmont starts.

Todd Pletcher sends out 3 horses. Moretti looks like your likely pacesetter in a race void of speed. He is bred to prefer longer distances and broke his maiden going 1 1/8 miles. The problem is the one time he set the pace it was a moderate tempo, he was a significant favourite and still lost. This is a class test for him and he does have to prove he can handle the distance.

Perhaps You’re to Blame (12-1 ML) can’t run anymore but his best races last year came at longer distances so I want to give him one more chance stretching out today. It’s possible he needed his first race this year off the layoff and it was a graded stake. Last time he ran on a sloppy track and failed to hit the board. He has not hit the board in any of his sloppy track races so throw that one out. He has some speed to stay in contact with the leaders something I’m hoping he shows with the addition of blinkers.

The Churchill 9th is a maiden allowance for fillies and mares 3-year-olds and up going one mile on turf. Broadway Lady Is your morning line favourite and she can win if she settles early as last time she was rank for most of the first half mile. I don’t want to take a short price on her and trust that she’ll be more relaxed and this is her first start against older horses.

Tizahra can win but she was loose on the lead last time and was the favourite so seeing her relinquish the lead is not a positive sign. Also with the speedy A Little Voodoo in this race, Tizahra will need a new strategy. Trainer Brad Cox is capable of having More Than Unusual ready in this spot but I do like the depth of this field so she’d really have to be a runner to win at first asking.

The horse I want is Rearrange (6-1 ML) who made her turf and 4-year-old debut 2 starts back off an 11-month layoff. She had a difficult post but thought she ran well all things considered. Yes, Tizahra beat her that day but she was alone on the lead and Rearrange was coming off a long layoff. This time Rearrange has the recency edge having run in the interim. Last out, Rearrange got squeezed a bit at the start and was at the back of the pack early, she made a 5 wide middle move to get into contention but eventually flattened late. Now 3rd off the layoff, a decent post and hopefully a decent trip can put Rearrange in the winner’s circle.