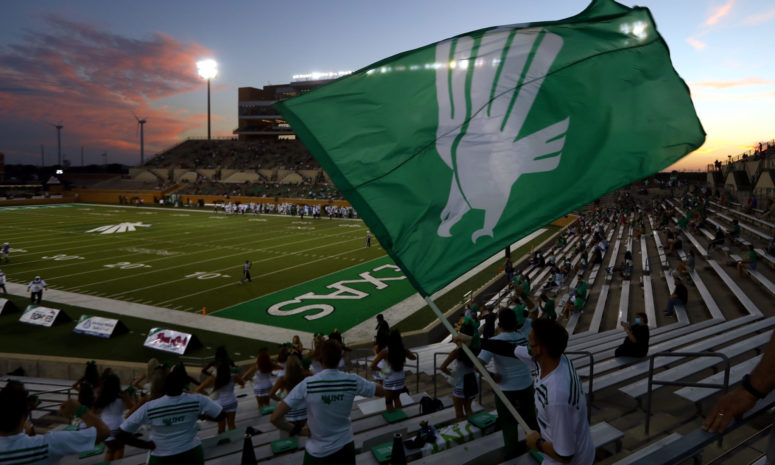 OddsHQ’s SMU vs North Texas Pick – 9/19/20: Both teams have started their season with wins, but will be battling for bragging rights and recruiting leverage in week 3 of this bizarre college football season.

Off to the Lone Star State

We go in search of a winning college football pick in an interconference matchup between a couple of teams who have been meeting off and on for nearly 100 years. One thing is for certain when the SMU Mustangs (1-0 SU, 0-1 ATS) make the short trek to take on the North Texas Mean Green (1-0 SU & ATS), and that is one of them will see their dreams of an undefeated season fall by the wayside.

The 6 p.m. (ET) kickoff on Saturday will be carried live from Denton, Texas by the CBS Sports Network, and those cameras will catch a rare sight at sporting events these days: real live fans. North Texas is limiting the event to about 8,000 ticketholders, roughly a quarter of the capacity at Apogee Stadium.

A quick check of the board at DraftKings finds the visiting Mustangs laying 14 points in this one, or -500 on the moneyline with the takeback on the Mean Green at +375. Saturday evening scoreboard target has settled in at 69.

Getting more than they bargained for last week in San Marcos, SMU nonetheless held on for a 31-24 win over Texas State. The Mustangs were giving up a whopping 24½ on the NCAA football odds board and got a bit sloppy with three turnovers and some costly penalties.

Except for the turnovers, the offense clicked behind senior quarterback Shane Buechele. The former Texas transfer completed 26 of his 36 aerials for 367 yards and a score but was picked off twice by a Bobcat defense that managed just seven interceptions all of 2019. A big question for the Mustangs coming into the season was who would step up at tailback for Xavier Jones, who is now employed by the LA Rams of the NFL. Sophomore TJ McDaniel answered that question with a 130-yard effort against the Bobcats with a heavy 27-carry workload.

Another big question was whether or not the SMU defense would improve after ranking near the bottom of the charts in points and yards allowed a year ago. The jury is still out on that one following an uninspired effort at Texas State. The Mustangs surrendered nearly 190 yards on the ground, and more than 400 total, all to a Bobcats team that is picked to finish near the bottom of the Sun Belt Conference.

That SMU defense will now be facing a Mean Green bunch that simply couldn’t be stopped last week in their first game. Granted, it came against Houston Baptist of the FCS, but it was still a powerhouse showing for Jason Bean and the UNT offense. The Mean Green punted just twice in the 57-31 final while rolling up a school-record 721 yards.

It was a balanced attack as well, as Bean and two of his backups threw for 361 yards while the ground attack gained 360. Bean, a redshirt sophomore, completed 11-of-18 attempts for 217 yards and three scores and also ran for another. Oscar Adaway III, a redshirt freshman, busted the 100-yard plateau on just five carries, two of them going for touchdown runs of 35 and 47 yards. Listed as No. 3 on the depth chart, Adaway didn’t even see action until the second half.

Much like SMU, the offense shined for North Texas while often looking lost defensively. The Mean Green did manage to cover the 22½-point betting spread, but the defense didn’t help by surrendering 569 yards – 480 of that through the air – and failing to come away with a turnover.

More than half of the previous 39 meetings took place from 1922-42, serving as nothing more than a glorified scrimmage for SMU then. The Mustangs won 18 of the 20 matchups in that span, with another game-ending knotted, and they own a 32-6-1 overall mark in the rivalry. This is the seventh consecutive year the schools have met, SMU winning four of the previous six.

Southern Methodist posted a 49-27 decision last year in Dallas, having plenty to cover a 3½-point line. The two recent wins by North Texas both came in Denton (2014, 2018), each of those as small chalk in 2018. The last two meetings in Denton fell short of the totals.

Should be a beautiful sunset to watch for those lucky enough to get into Apogee Stadium, the thermometer sitting in the low-80s at boot and just a light breeze. It’s pretty easy to imagine Buechele picking apart the UNT defense with one scoring drive after another, and sometimes the best solution is the easy one. Lay the points on SMU in a 47-20 final. Best price on SMU -13.5 (-110) via DraftKings