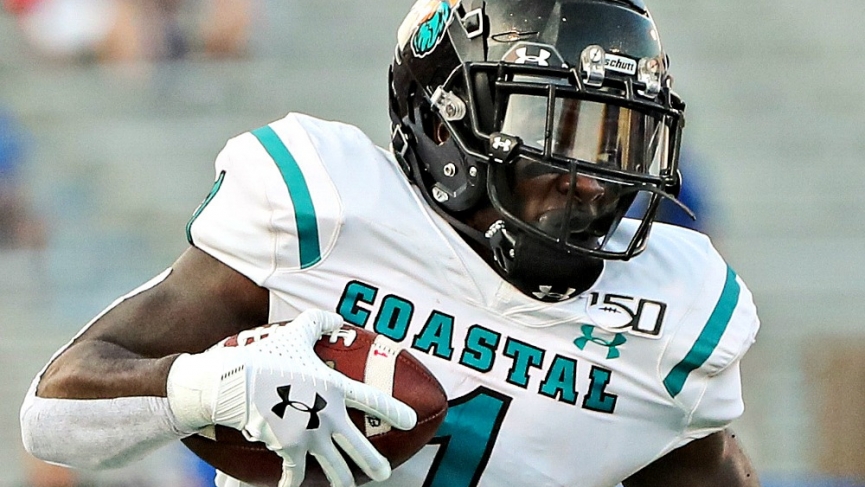 OddsHQ’s Campbell vs Coastal Carolina Pick for 9/18/20: Coastal Carolina is 8-5 ATS since the start of last season, and are 21-15 to the Over since 2017. On Friday night they are the loan FBS team in action as they take on their former Big South foes in Campbell

It would’ve been so easy for Campbell University to give up on playing football this season. Abandoned by their own conference amid the pandemic, the Fighting Camels decided they would instead play on, which has led them to a Friday night road matchup as Underdogs against the Coastal Carolina Chanticleers.

Both schools have the rare opportunity of enjoying ESPN’s cameras focused on the 7:30 p.m. (ET) boot at Brooks Stadium in Conway, SC. Campbell certainly isn’t used to having the spotlight in a nationally televised game considering it plays on the FCS level, while Coastal Carolina is more accustomed to regional coverage coming from the Sun Belt Conference.

The numbers at FanDuel suggest it will be a lopsided affair, as one might expect when college football teams from different divisions meet. Coastal Carolina is favored by 26½ points or -3500 for anyone wanting to play the moneyline. Bettors are looking at 57½ for the total, with the ‘under’ carrying a little extra tax.

Camels Coming Off Near Upset

There was a split in the Big South earlier this summer when the conference announced it would not play fall sports. A few schools were in favor of the decision, but Campbell was not one of them along with Kennesaw State, Charleston Southern, North Alabama, and Gardner-Webb. It did leave the Fighting Camels scrambling to come up with a schedule, and you might say they’ve become sort of a temporary member of the Sun Belt with three of the four games on their current slate against teams from that conference.

One of those was last week head coach Mike Minter’s troops traveled to Statesboro to take on Georgia Southern, a team that has gone bowling the last two seasons. The college football odds had Campbell as a 34½-point underdog, and the Eagles needed to score a pair of 4th-quarter touchdowns to avoid the outright upset with a 27-26 final.

Granted, Georgia Southern was incredibly short-handed with 33 players sidelined, many of them starters, due to the virus. But Campbell was also missing more than a dozen players, many of the inactive players more to do with contact tracing than actual positive tests. The Fighting Camels still put up a good fight, outgaining the Eagles thanks in large part to the passing of Hajj-Malik Williams (17-25, 237 yards, 2 TD. Campbell scored late and could’ve tied the game with an extra point, but Minter elected to go for two and the win, and Williams’ pass attempt was too high to convert.

For the second-straight year, head coach Jamey Chadwell took his Chanticleers west to Lawrence, Kansas to play the Jayhawks. And just as they did a year ago, Coastal Carolina returned home last weekend with an upset win. They were touchdown underdogs last season when they posted a 12-7 decision, and the NCAAF odds had the Chanticleers on a +4½ spread this time in a contest they controlled from start to finish for a 38-23 win.

Coastal Carolina scored the game’s first 28 points, then held off a Kansas third-quarter push in a contest that made it past the 55-point total with about a touchdown to spare. Grayson McCall only completed 11 passes for 133 yards, but three of the catches went for scores and the freshman QB also ran for 73 yards and two touchdowns. The Chanticleers forced Kansas to make three early turnovers while playing mistake-free themselves and sustained drives by converting 8-of-14 third-down tries.

McCall beat out juniors Bryce Carpenter and Fred Payton for the job, and the youngster has an experienced line in front of him. He’s also got 1,000-yard rusher CJ Marable in the backfield with him, allowing the Chanticleers to play a run-first style on offense and chew up the clock.

These teams used to see each other regularly when Coastal Carolina was a member of the Big South. The Chanticleers are beginning their fourth year at the FBS level, and this is the second time they’ve hosted the Fighting Camels since making the leap. The first was two seasons ago, and Coastal Carolina rolled up an easy 58-21 victory to cover a 30-point betting spread.

Including last week’s defeat to Georgia Southern, Campbell has dropped its last five games against Sun Belt opponents and will be at ranked Appalachian State next weekend. Coastal Carolina will take a week off before hosting Arkansas State in its Sun Belt opener.

The weatherman says we should expect a sloppy track at Brooks Stadium due to rain being all over the forecast through Friday thanks to Hurricane Sally. Slippery turf and slippery footballs have me thinking of the ‘under’ with my college football pick.