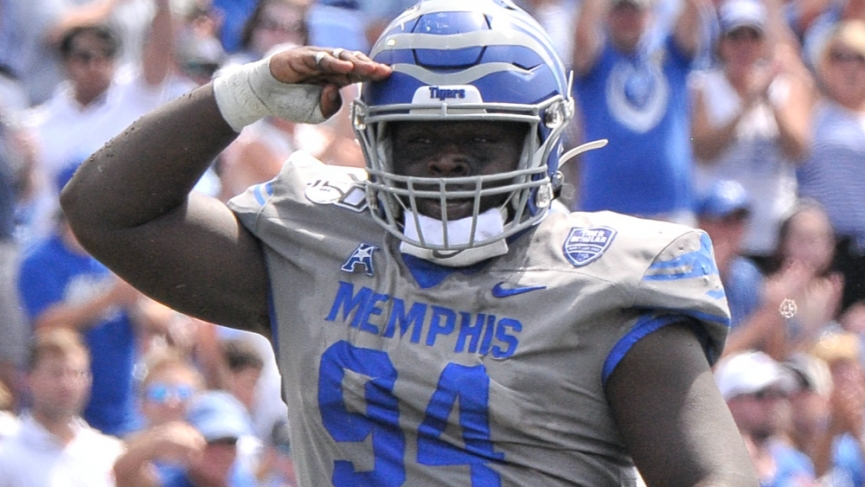 Odds.com’s Memphis vs SMU Pick – College Football Week 5: The Memphis Tigers head to Dallas as small favorites in their conference opener against the SMU Mustangs.

Flipping calendars from one month to the next has become more meaningful since spring as everyone hopes the next month sees life return a little closer to normal. Following a rocky September, college football is certainly glad to see October arrive. Just ask the Memphis Tigers who last took the field four weeks ago, and now have to jump into their conference slate on the road at the SMU Mustangs.

It’s the American Athletic Conference opener for both, and ESPN2 will televise the 3:30 p.m. (ET) kickoff at Gerald J. Ford Stadium in Dallas. If the numbers at DraftKings are any indication, this will be one of the more entertaining games of Week 5. Memphis is presently favored by a field goal, and the 74½-point total is the highest on the board.

Will Tigers Be Rusty After Layoff?

Ryan Silverfield’s first season at the helm in Bluff City has been a case of hurry up and wait. The Tigers were among the handful of teams to play in Week 1, pulling away from Arkansas State in the second half to nail down a 37-24 decision at home. Memphis has been sitting ever since, with several games canceled. One of those was a Week 3 AAC contest against Houston that the Tigers had to cancel because of coronavirus protocol, the game rescheduled for December 5 as things currently stand.

Memphis was in a dogfight early with the Red Wolves who held a 14-7 lead in the first quarter before the Tigers finally got things together. Brady White ultimately threw four touchdown passes, two of those scoring strikes coming in the third quarter as the 5th-year grad student completed 27-of-37 aerials for 280 yards. Rodrigues Clark eclipsed the 100-yard plateau on 20 rushes, one of them going for a score behind an O-line led by sophomore guard Isaac Ellis.

The Tigers made some early adjustments on defense to aid the cause, coming up with three takeaways that helped keep the Arkansas State defense on the field too long. Memphis also picked up three sacks in the game, but couldn’t keep the Red Wolves from tacking on a 4th-quarter touchdown that kept Tiger backers from covering the 18½ points they were laying. The final also fell about 10 points shy of the 71½-point total on the NCAA football odds.

In comparison to the Tigers, as well as many other teams, SMU has been a busy football team with three games under its belt. Sonny Dykes’ squad even had one big rivalry game with TCU canceled because of virus protocol, and appear to have one of the nation’s top offenses behind Shane Buechele.

The senior transfer from Texas didn’t have to rely on his right arm last week in a tune-up against FCS Stephen F. Austin, instead of turning to the ground game to fell the Lumberjacks by a 50-7 score. After passing for more than 700 yards in wins over Texas State and North Texas to start the campaign, Buechele was a little off his game in completing 14-of-25 passes for 141, though he did connect on a couple of scoring shots to Kylen Granson and Danny Gray. Meanwhile, the O-line opened holes for a pair of 100-yard rushers, Ulysses Bentley IV rumbling for 104 yards on just six carries while sophomore TJ McDaniel matched the output on 17 totes. That pair has run for 673 yards combined in SMU’s first three games.

Southern Methodist’s stop unit entered the game having given up more than 900 yards in the first two wins, but caught a break against the outmanned Lumberjacks. It’s an experienced group on defense with linebacker Richard McBryde, formerly of Auburn, and corner Brandon Stephens, a transfer from UCLA, but they’ll certainly be tested against White and the Tigers.

It’s the 10th straight year the schools have gotten together on the gridiron, and the Tigers have built a 9-3 advantage in the series by winning the last six meetings. The first four victories in the streak were no contest, Memphis topping SMU by an average score of 57-13.

The last two years have seen the Mustangs keep things closer, though the Tigers still won by 28-18 and 54-48 counts. Last year’s game in Memphis saw SMU arrive with an unbeaten 8-0 record before being dealt its first setback. The two teams combined to score 41 points in the fourth quarter to easily send the game past a 72-point total has the Tigers barely covered the 5½-point betting spread.

Saturday afternoon is going to be a bit warm in Big D with the thermometer climbing into the low-80s under mostly sunny skies. Bettors will want to keep an eye on the wind conditions, with the current forecast calling for a 15 mph wind out of the south which could be a big factor in the kicking game and field position throughout the game.
This could turn into a game like last year with back and forth scoring, but the long layoff for Memphis has me thinking the Tigers could start slowly. That has me ignoring the total for my college football pick, and instead of counting on Memphis to eventually get things going to cover the field goal spread.