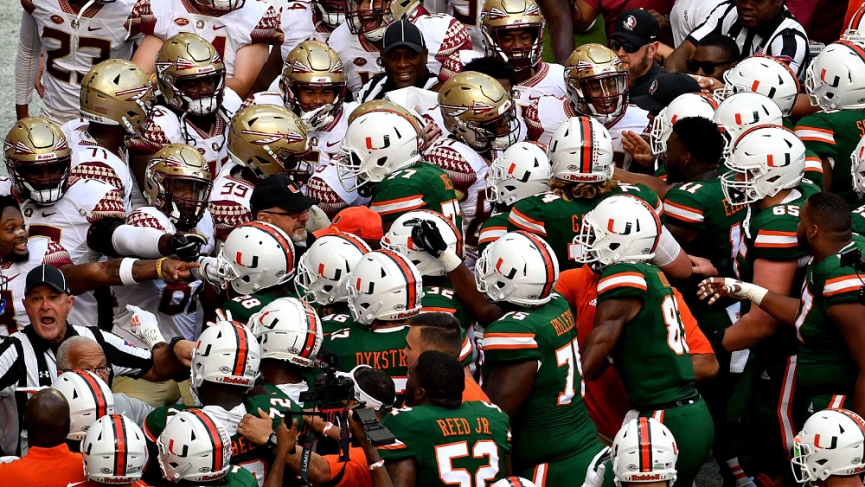 Odds.com’s Florida State vs Miami Pick for Week 4 of College Football: The underdog (15-3, last 18) and the road team (12-2, last 14) are both on a +80% ATS run in this series. While the Seminoles hold a 6-1 ATS record in their last seven games in Miami. It’s a bitter inner-state rivalry, and the Hurricanes and Seminoles are chomping at the bit to write another page in this storied rivalry on Saturday.

This is one of the great intra-state football rivalries in the nation that in many seasons has determined which team moves on to contend for the National Championship. The Miami Hurricanes are favored by 11 points, and nothing but a win over a highly suspect Florida State Seminoles team is needed this season.

One of the Best Rivalries

The Seminoles have been double-digit favorites on seven separate occasions and have won all seven games, but just 4-3 ATS.  In 1993 the Seminoles led by Heisman winner Charlie Ward defeated the Hurricanes 28-10 and covered the spread as 14-point favorites. The 1993 Seminoles went on to win the National Championship.

This betting system has earned a losing 45-153 record for 23% SU wins and 117-75-6 ATS mark good for 61% winners over the past 15 seasons. The requirements for an active opportunity are to bet on unranked road teams facing a conference foe and installed as a 3.5 or greater underdog and facing a ranked team between game numbers 2 and 5 of the regular seasons.

Now, let us drill down through this data to determine a sub-set that has posted better results. Applying the data to only show games played in the ACC Conference produces a 5-18 SU record for 22% wins and a 15-8 ATS mark good for 65% winning bets since 2005.

One more drill down produces a subset that has earned a 7-12 SU record for 37% wins and a jaw-dropping 16-3 ATS mark good for 84% when the team (Seminoles) is coming off a road game installed as a favorite.

This NCAA Football betting system has produced a 24-11 ATS mark good for 69% winning bets over the last five seasons. The parameters needed to be met are betting on any team that is off a tough home loss of three or fewer points during the month of September. Moreover, if the team (Seminoles) is coming off a home loss installed as a favorite the record soars to 13-10 SU for 57% wins and 16-7 ATS for 70% winning bets since 2015.

The machine learning models project that the Seminoles will gain 8.5 or more yards-per-play and will score 28 or more points. In past games in which the Seminoles met or exceeded these performance measures, they have gone on to earn an outstanding 12-0 SU record and a 9-3 ATS mark for 75% winning bets and covering the spread by an average of 11 points.

Bet the Florida State Seminoles and split the wager into two parts with 60% of your normal bet size on the line and 40% bet using the money line. I realize this is a very bold call to make, but I do believe the Seminoles will win the game!