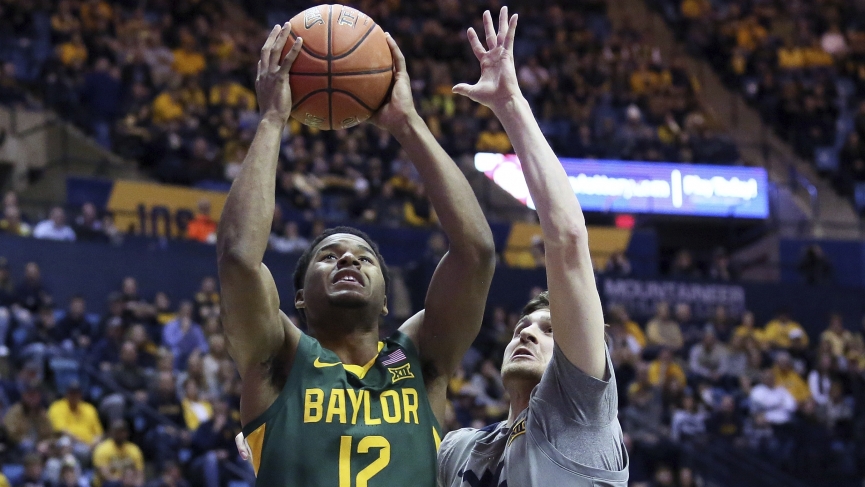 It was arguably the most successful season in Baylor Bears history, but also the most unfulfilling. While every team has a sense of unfinished business from the 2019-20 campaign, Baylor might feel it more than others and use that motivation to take the next giant step forward.
Baylor ended up No. 4 in the coaches poll and No. 5 in the AP, sitting atop one or both of those rankings for five consecutive weeks. As with a lot of the top contenders on current college basketball futures boards, a lot depends on how things shake out with players who have declared for the NBA Draft with the option to pull back and return to school.
The Bears are consistently listed as the team to beat in the Big 12, however, as Scott Drew & Co. seek their first regular season conference hoops title since 1950.

Jared Butler and Macio Teague are the biggest question marks right now, each throwing their names out to test the NBA Draft waters. Butler, a 6-3 guard from Louisiana, broke out in this past season to lead Baylor in scoring (16.0) and improved his shooting from 3-point land. He was also one of the key players behind the Bears’ success on the defensive end, Baylor fifth in the country in scoring defense and 25th holding opponents under 40% from the field. Teague, another 6-3 guard out of Cincinnati, ranked second on the team averaging almost 14 PPG.
In addition to those two, Baylor waits to see what Tristan Clark is going to do. The 6-9 senior saw his minutes greatly reduced last season after he suffered a bad knee injury the year before, and if he’s fully healthy, Clark could opt to enter the transfer portal. The Bears are also going to be without Freddie Gillespie and Devonte Bandoo, the 4-5 scorers on the team, who both ran out of eligibility. Gillespie led the team in rebounding (9.0) and projects as a late second-round pick like Butler in the NBA Draft.
Should Butler and Teague both depart, which seems unlikely, the Bears won’t be in bad shape in the backcourt. Mark Vital is returning for his senior season, providing scoring off the ball and able to slide into the wing slot if needed. Davion Mitchell will be a junior and established himself as a solid point guard who just needs to step up his offense from beyond the arc. Matthew Mayer provides a solid 6-9 frame with a decent short-jumper. Drew is hoping 6-10 Flo Thamba can stay healthy to work the glass in Gillespie’s place.

Should the Bears have to deal with a worst-case scenario with Butler, Teague, and Clark going their own ways, it would force Drew to expose his top recruits earlier than he’d like. A best-case scenario with the three question marks answered affirmatively allows Baylor to give Dain Dainja, LJ Cryer and Zach Loveday time to learn the system, and slowly work their ways into the rotation down in Waco. 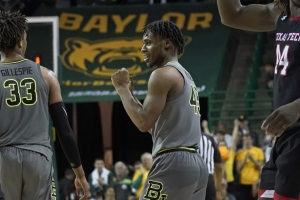 Dainja is 6-9 but plays bigger in the paint with his wingspan and quick feet. It’s the defensive end of the floor, how to defend when his man pulls him out, that Dainja needs to improve. Loveday is a 6-11 center who has the ability to pull his defender out while also being a shot-blocker down low. He’s still raw and needs to fill out, but has been compared – perhaps unfairly – to Christian Laettner.
A deep backcourt should give Drew more time to slowly work Cryer into action. A 4-star recruit from Katy, TX, Cryer rated as the 15th-best point guard in this year’s class and scouts rave about his court vision. The 6-1 Cryer also has a nice outside shot and isn’t afraid to drive the paint and take on the big guys.

Baylor won the Myrtle Beach Classic last season, taking down Villanova in the championship game by an 87-78 count as small underdogs on the NCAA basketball odds. The three wins in that early tournament helped propel the Bears to a long 23-game win streak. They could have a chance to show it was no fluke to beat Villanova with the two programs representing half of the field in this November 2K Empire Classic at Madison Square Garden. Michigan and NC State fill out the other two slots in the bracket.
Not long after beating Villanova, Baylor took down Arizona and Butler in succession, and also went to Florida in January to pick up a win and cover against the Gators in the Big 12/SEC Challenge. And, of course, there was the season-defining victory in Lawrence over then-No. 3 Kansas, Baylor’s first win at Phogg Allen Fieldhouse.
Baylor 11/1 college basketball odds at FanDuel stand as the third-best odds on the board behind Gonzaga and Villanova and make the Bears the top team in the Big 12. We all know the road to that elusive conference crown goes through Lawrence, but this Baylor team is plenty capable of ending the 70-year drought.