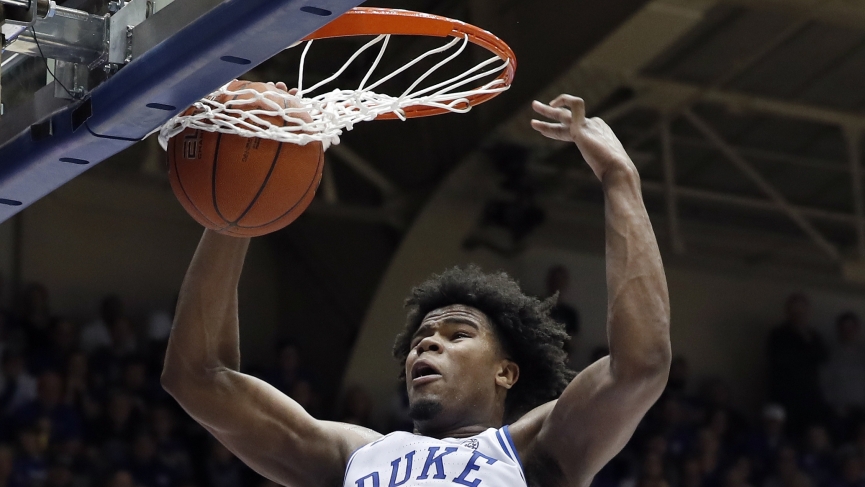 For all of the Duke haters out there, it was another successful season as Mike Krzyzewski and the Blue Devils were denied an opportunity to execute another one of their 5-year plans with an NCAA Basketball Championship. Duke’s last two titles came in 2010 and 2015, and as no worse than a 3-seed in this year’s tournament, the Blue Devils had a great chance to win what would’ve been their sixth title under the legendary coach. For those college basketball bettors that had Duke to win the Championship, there was a high probability of cashing that college basketball pick.

Those same Duke haters might have only gotten a 1-year reprieve, however, with the Durham cagers seemingly loaded to bear the 2020-21 season. There are only a handful of coaches that can lose talent like Krzyzewski saying goodbye to this offseason, and come back looking possibly even stronger than before. With Coach K, however, it’s something we’ve come to expect on a yearly basis which makes following Duke’s college basketball odds exciting.

There is a lot of college basketball picks floating around right now that make either Duke or Gonzaga as the team to beat next season. FanDuel college basketball odds have the Zags at the top of its charts at 9/1, with the Blue Devils seventh on the list at 15/1. All things considered, that looks to be a bargain 11 months ahead of the Final Four in Indianapolis.

Duke’s top three players in the backcourt will not be returning, and none of them is leaving a hole like Tre Jones. The 6-3 guard ranked 16th in the country dishing out 6.4 assists per game, while placing second on the Blue Devils with a 16.2 scoring average and leading the team in steals. Most NBA Draft projections make Jones an early 2nd-rounder.

The Blue Devils are also going to be without Cassius Stanley, who leaves Durham after just one season and is also listed as a potential 2nd-round pick. Stanley was third on the team averaging 12.6 PPG. Alex O’Connell (5.2 ppg), a 6-6 junior, has entered the transfer portal. Replacement of these key players will have a significant impact on Duke odds to win next year’s championship. 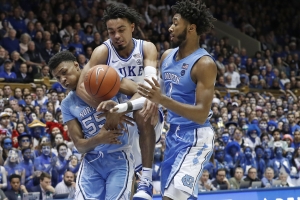 How soon Krzyzewski can get his team on the floor for practice will go a long way in determining who takes over point duties. Jordan Goldwire has the experience and knows the system as he enters his senior season. It shouldn’t take long for Jeremy Roach, the 4th-ranked point guard in the 2020 class, to get his feet under him and begin putting his all-around game on the floor to assume the point. Roach could play off the ball as well, and DJ Steward adds another frosh on the perimeter in a shooting role.

There’s depth on the wing with Wendell Moore Jr. and Joe Baker returning. Here again, there’s a 5-star recruit in Jalen Johnson who could present the proverbial matchup nightmare with his 6-8 frame pulling bigger defenders out. Johnson is likely a one-&-done and could go as high as a lottery pick in the 2021 NBA Draft.

Tale Of The Tape An Intriguing Story In The Paint

Vernon Carey Jr. was last year’s one-&-done star in Durham this past season and the 6-10 center projects as a possible top 10 pick in this year’s NBA Draft. Carey’s departure leaves some big shoes to fill, and the Blue Devils might not have a pure center on hand to plug in down in the paint, forcing Krzyzewski to play smaller than he would like.

Matthew Hurt will fill minutes at forward, and the 6-9 sophomore will be another matchup problem for opponents after he proved to be the top 3-point shooter for Duke. Hurt ended up taking one less try beyond the arc than Jones and made three more of his attempts. He’ll be challenged for minutes by freshmen Jaemyn Brakefield and Henry Coleman III. Brakefield could be a diamond in the rough, while Coleman will be asked to scrape the glass initially.

Duke did sign 7-foot freshman Mark Williams, whose stock has risen the last couple of prep seasons. He’ll be slowly worked into the classic center’s role, but he’s raw. Krzyzewski could turn some of those low-post minutes over to Patrick Tape, a graduate transfer from Columbia who committed to Duke then rescinded his commitment before changing his mind once again to come to Durham. A North Carolina native, the 6-10 Tape sat out this last season to concentrate on his schoolwork, so it remains to be seen what that layoff might mean.

Assuming everything gets started on time, we will have a clash between Krzyzewski and Tom Izzo for a fifth consecutive season. Duke and Michigan State are slated to square off in November’s Champions Classic, which takes place at Madison Square Garden this time. The Blue Devils cracked the Spartans by an 87-75 count in the ACC/Big Ten Challenge last December, about eight months after Michigan State upset Duke in the East Region Finals of the 2019 NCAA Tournament.

The Blue Devils are also scheduled to spend Thanksgiving in the Bahamas – nice work, if you can get it – as the headliner in the Battle 4 Atlantis. The others heading to the islands for Turkey Day are Creighton, West Virginia, Memphis, Utah, Ohio State, Wichita State, and Texas A&M.

There may not be another coach more motivated to make up for the lack of an NCAA Tournament this year than Krzyzewski. My advice to every Blue Devil detractor is to search those couch cushions for change and put a few dollars on Duke’s future odds, just to hedge the hatred.