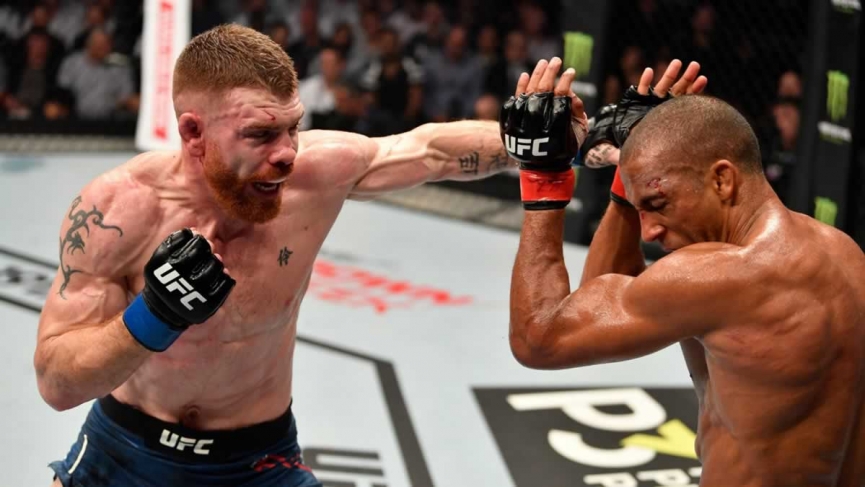 From a betting perspective, the biggest favorite on the UFC Vegas 14 card is middleweight, Julian Marquez.  I don’t see any value on his opponent, newcomer Saparbek Safarov (via WilliamHill).

Dos Anjos (29-13) was slated to face Islam Makhachev this Saturday before a staph infection booted the AKA product out of Saturday’s main event matchup. The Brazilian will be competing at lightweight for the first time since Nov. 2016 after a 4-4 stint in the welterweight division. The 36-year-old last saw action at UFC Raleigh in January where he suffered a unanimous decision loss to Michael Chiesa

Felder (17-5) last competed in February where he lost a split decision to Dan Hooker at UFC Auckland, where the majority of media members scored the fight for the “Irish Dragon” The 36-year-old didn’t have much of a training camp but revealed he had been training for a triathlon ahead of this opportunity, so the weight cut may not be an issue. The Roufusport product has gone 5-2 in his last seven bouts, including a TKO win over top-ranked lightweight Charles Oliviera.

Physically both fighters are very similar and if this matchup stays standing, Felder could have an edge in the striking department. Add in the fact that the majority of fighters who move down a weight class in their mid-thirties tend to not fare well with the weight cut being much harder on their bodies with age. With a fight this close on paper, I do see value on Felder as the underdog in this bout.

Granger (7-1) looks to avoid back-to-back losses for the first time in her career when she battles TUF veteran Yoder. The 28-year-old is coming off her first career loss to Amanda Lemos at UFC Busan, in a fight where she was finished in the first round. Granger was slated to fight Nadia Kassem in August however an injury forced the Australian fighter out of the contest. It will be close to a year since Granger had her last fight

Yoder (7-6) is in dire need of a victory after suffering two straight losses. The 33-year-old is coming off a unanimous decision setback to Livinha Souza at UFC 252 in August. The California native has gone 2-5 in the Octagon, with all of her fights going the distance.

This line actually flipped, with Yoder opening as the favorite and now being bet down to the underdog. I see this as a very close matchup with both women having fairly similar skillets both in striking and on the ground.  The one area of difference is experience, with Yoder having seven fights in the Octagon compared to Granger’s two fights. For that reason and the fact Yoder is very difficult to finish, I see plenty of value on Yoder as the +130 underdog via Bet365

Murata (11-1) will be making her UFC debut after a successful run in Invicta FC where she claimed the vacant strawweight title in her last bout. The 27-year-old has finished seven of 12-career opponents and carries a seven-fight win streak into her first Octagon appearance.

You can clearly see with the matchmaking the UFC is trying to book a rising prospect in Murata against a veteran in Markos, but I think this is a case where it could backfire. While Markos has had her struggles over the last few fights, The Ultimate Fighter 20 competitor has fought far tougher competition and generally is in close fights. Markos has 20-career fights competed to 12 for the Japenese fighter. If Markos can avoid takedowns, use her wrestling and keep this as a striking battle, I think there’s a chance the Canadian can pull this off. That’s why I see value on Markos at +150 via WilliamHill.