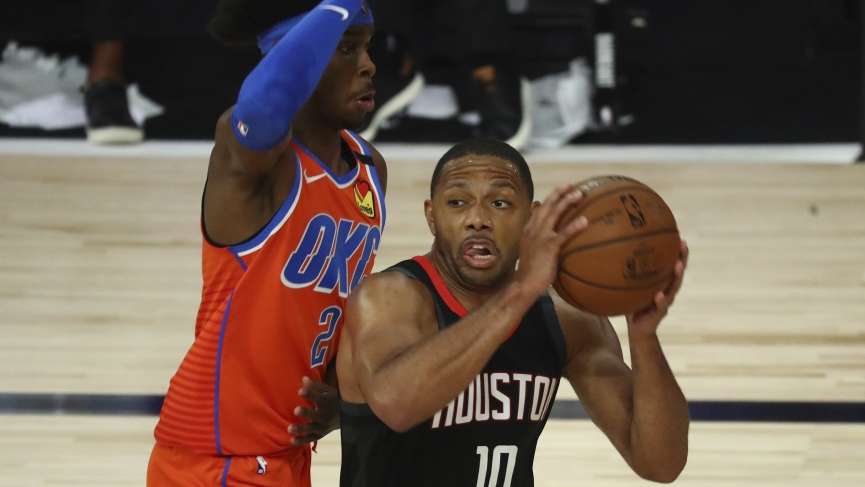 We are jumping right into Thunder vs Rockets pick for today’s game 2 of this NBA playoffs series. The Oklahoma City head into game 2 down 1-0 after losing game 1, 123-108 to the Houston Rockets. The Rockets controlled the game and cruised to an easy win even without one of their stars, Russell Westbrook. Westbrook will be out for this game as well, as he continues to heal his thigh. The Rockets controlled the game from the 3 point line. The Rockets made 52 attempts from the 3 point line while making 20 of them. The Thunder will not let that happen again and that’s exactly while I’m hitting the total on this game UNDER and let me tell you why.

Adjustments must be made for Thunder game 2

The Thunder defense came out flat in game 1 and let Houston take as many shots as they wanted to from the 3 point line. Houston ended up making 20 of those 52 attempts which is 38.5%. Well, that is a very high number against the Thunder. The Thunder are ranked 3rd in 3 point % against per game which means I expect the Thunder to make adjustments and make sure that doesn’t happen again.

Oklahoma dominates Houston when it comes to size which is why Houston shoots from the outside so much, but I expect the Thunder to work through the pick and rolls and switch off when needed so they can contest the shots more effectively. The Rockets also rank 24th in 3 point % per game at 34.5.

We know Houston will shoot from the outside on every opportunity then get, but that doesn’t mean the Thunder can’t step out and contest every single shot to make it harder for them and that’s exactly what their defense does. When it comes to the Thunders offense, there just isn’t much there when playing Houston. They are playing a Houston defense who loves to play switch defense. It’s effecting the way Chris Paul plays and of course the number of points he scores.

Rockets changed it up without Westbrook 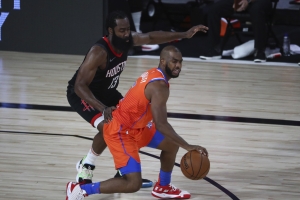 On the other side of the ball, we have the Rockets defense who played really well in game one and I expect that to move over to game 2. Who knows how to stop Chris Paul more than his old team. As mentioned above, the Rockets are playing switch defense and they know that hurts Chris Paul’s game. Of course, Paul is going to make some adjustments this game, but if you look at his past with teams who play switch defense it hasn’t been good for him ever.

The Rockets offense has changed a little with Russell Westbrook out and that’s why the shot attempts have skyrocketed from the 3 point range. Eric Gordon is the ball handler now with Westbrook out and that changes a lot. Not just the pace, but the crisp sharp passes that Westbrook makes so his teammates have better chances and better looks. Eric Gordon is just a different type of player and it will show in the score.

We also have RLM (reverse line movement) on this line and I love to follow that factor. The line for this total opened up at 227.5 and has dropped to 226. The public is hammering this OVER, yet the line has dropped a point and a half. Well if the public loves the OVER at 227.5, why would Vegas make the line even better for them at 226. It’s because Vegas and RSP are on the same side and we are going to hammer this UNDER! Below are a couple of key trends that I like for this game.

Thunder vs Rockets TRENDS for this game

Under is 5-1 in Thunder last 6 road games vs. a team with a winning home record.

Under is 4-1 in Thunder last 5 Thursday games.

Under is 9-4 in Thunder last 13 vs. a team with a winning straight up record.

Under is 7-0 in Rockets last 7 games playing on 1 days rest.

Under is 6-1 in Rockets last 7 after allowing 100 points or more in their previous game.

Under is 6-1 in Rockets last 7 after scoring 100 points or more in their previous game.

Under is 6-1 in Rockets last 7 home games vs. a team with a winning road record.

Under is 4-1 in Rockets last 5 games as a favorite.

Under is 4-1 in Rockets last 5 vs. a team with a winning straight up record.

Under is 6-2 in Rockets last 8 when their opponent allows 100 points or more in their previous game.

Under is 13-6 in Rockets last 19 when their opponent scores 100 points or more in their previous game.

So for this game, RSP is taking the Oklahoma Thunder/Houston Rockets UNDER 226