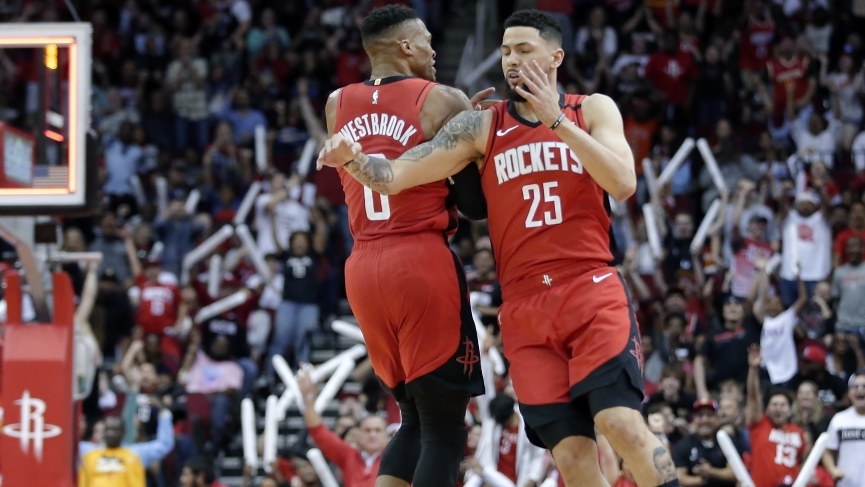 Fresh off a Clint Capela trade that yielded them, Robert Covington, the Houston Rockets were finding their way as their new identity took form. They went on a tear right after the deal, winning 7-of-9 and defeating the Los Angeles Lakers, Utah Jazz, and Boston Celtics (twice).
An ugly losing streak would follow, as the Rockets struggled at the New York Knicks, at the Charlotte Hornets, and at home against the Los Angeles Clippers. They had lost 4-of-5 just before the NBA suspended the season. It makes sense why their NBA odds are 12 to 1 to go all the way.

This was the second time in a year that the team decided to make a big change and move in another direction. In came Russell Westbrook, someone that James Harden loved playing with while coming up in the league. Westbrook is two and a half years younger than Chris Paul, so this was the main reason for the change. The strange part about it all is that the Rockets could never get beyond the Golden State Warriors in the playoffs. So, now that Kevin Durant has moved on and Klay Thompson is recovering from a torn ACL, why would Houston jump the gun and retool? Many wondered the same thing.

The Rockets are currently 40-24, good for the sixth seed in the Western Conference. They’re just four games behind the two-seed Los Angeles Clippers. Once again, the west is completely loaded. Navigating the west will be just as difficult as taking down the Eastern Conference representative. So, what are the chances that the Rockets win their first championship since the Hakeem Olajuwon era in 1995? Odds makes them

How has the brief small ball system worked in Houston? Obviously, this is still very new to the club, so an 8-6 start isn’t bad. Maybe this time off can allow the team to view more film on their successes and failures. One thing is for sure, this Rockets team can shoot! Since their acquisition of Covington, Houston leads the NBA in three-point shooting at a healthy 52.0 percent. Again, this is over a 14-game sample size, but how impressive is that? Even with Russell Westbrook posting a pathetic 9.9 percent from deep over the span, the team is still thriving from beyond the arc. 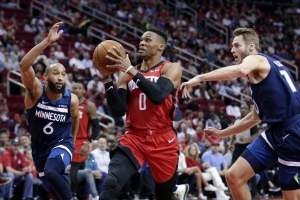 Something that Westbrook has done incredibly well since the deal is dominating inside the paint. The very athletic guard has a two-point shooting percentage of 90.1 over the 14-game span. That’s not a typo. As bad as Westbrook shoots from deep, he’s very gifted inside the arc. He’s starting to thrive with opposing big men being forced to cover P.J. Tucker out at the three-point line.

With positivity building with the club’s shooting, something has to falter without a true center. Covington stands at 6’7” and is the tallest player in Houston’s starting lineup. As you can assume, this doesn’t bode well for rebounding purposes. The Rockets rank dead last in defensive rebounding since converting to small ball, reeling in just 68.7 percent of opponents’ missed shots. These second-chance points are especially important come playoffs, so the Rockets better keep shooting at a ridiculous rate from deep.

How Houston Stacks Up Against Top Dogs

With many talented big men in the west, this makes things challenging defensively for Houston in a long series. Harden’s lack of defense over the years is noted. Of course, the Rockets have accepted this as their reality when they moved on from Capela. Anthony Davis, Nikola Jokic, and Rudy Gobert could all prove to be very difficult matchups. It’s true that they’d be responsible for covering Tucker around the three-point line for most of the game, but how much of an advantage is this really?

The Clippers are a very physical team. With talented wing players galore, the Clippers are potentially the worst matchup for the Rockets. Kawhi Leonard and Paul George would be tasked with locking down Harden and Westbrook. The two are about as solid as defenders come in the league. Los Angeles ranks as the fifth-best shooting team beyond the arc, so it wouldn’t be a surprise if they kept up with Houston’s expertise.

Let’s say the Rockets get beyond the entire Western Conference and eventually take on the Milwaukee Bucks. This is a terrible scenario as well. The Bucks are a nightmare defensively. They’re big, they dominate the glass, and have terrific chemistry. In fact, Milwaukee’s 101.6 defensive rating ranks best in the NBA.

I’d much prefer the Rockets of the 2018-2019 season. It may have been best to run it back with Chris Paul one last time with the Warriors out of the picture. If the Rockets don’t make it out of the second round of the playoffs, then general manager Daryl Morey will have some explaining to do. With Harden now 30, it’s time to stop squandering seasons away with crapshoots like this small ball experiment they’re running with. It’s a big change with very little time to adjust.

The Rockets are ranking fourth in championship odds on most sportsbooks behind the Los Angeles clubs and Milwaukee. This seems reasonable, as I don’t see them besting any of the aforementioned teams. With the new design of the club in the air, I’d prefer better odds if I’m laying a bet on Houston. Don’t waste a wager on the Rockets in 2020.