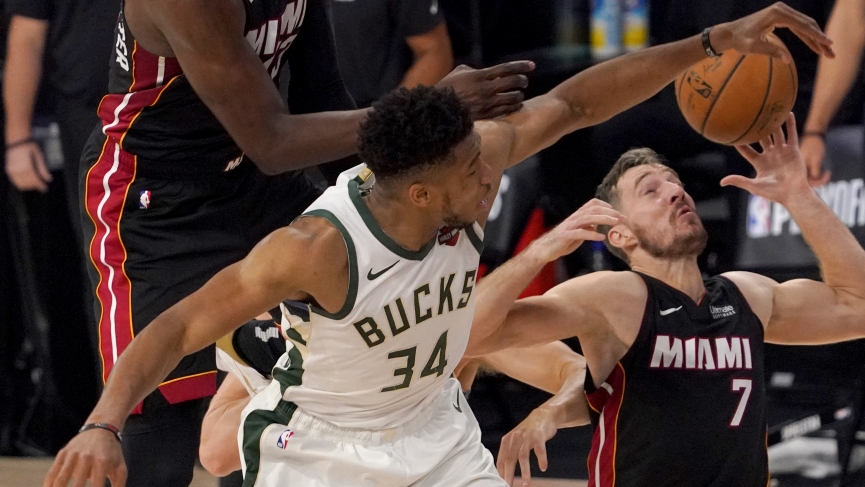 Miami has the Milwaukee Bucks Feeling The “Heat”

The Miami Heat knocked off the Milwaukee Bucks 115-104 in Game 1 of this Eastern Conference Semifinal series and I cashed a ticket with Miami +5.5 in that outright win. Miami is now a perfect 5-0 SU and ATS here in the playoffs and the Heat made a powerful Game 1 statement to the #1 seed in the East.

Jimmy Butler also made a loud statement and showed everyone why the Miami Heat went out and signed him in the offseason. He has a knack for elevating his own game and his teammates at playoff time and he certainly did that in Game 1 with a phenomenal postseason career-high 40 points in the win. Goran Dragic poured in 27 points and Bam Adebayo stepped up with a double-double as well.

Milwaukee shot the ball well enough to win the game as they connected on 49.3% shooting from the floor and 46.4% from the perimeter but they were beaten up on the boards with the Heat owning a +12 rebounding margin in Game 1 and the Bucks committed far too many turnovers with 19 for the game. Those two key statistical discrepancies proved to be difference-makers in the Miami win. Miami also held Milwaukee down in the final few minutes of the game as the Bucks went cold from the field as the Heat defensive intensity got turned up late in the game.

I want to talk about the NBA playoff concept of a series being mispriced from the beginning. I have seen this happen before in other playoff series where one team is just undervalued throughout the series from a pointspread perspective and you can keep riding that team in each game of the series to ATS success.

I believe we might have a mispriced series on our hands here. Milwaukee was 5.5 point favorites in Game 1. They lost outright. They are right back to being a 5 point favorites here in Game 2. I’m not convinced there are 5 points of difference on a neutral court between these two teams right now. The Heat have been one of the absolute best teams in the Orlando bubble since the restart began.

They are only one of two teams that are undefeated both SU and ATS so far here in the playoffs. The other is the Boston Celtics. They also have been a very tough out and a problem for the Milwaukee Bucks all season long. Miami was 2-1 in the 3 regular-season meetings against Milwaukee winning both of them prior to the bubble. The third game came in the Orlando bubble. It was a game that Miami led by 17 at Halftime and then Milwaukee came back thanks to a crazy 4th Qtr run to win by double digits in a game that Jimmy Butler and Goran Dragic didn’t play for the Heat. It was a misleading final score and win for the Bucks. Milwaukee has been a bit more up and down since play resumed in July and for all of those reasons, I am not sure Milwaukee -5 or more in every game of this series is an accurate price range for where these two teams are at right now.

I truly feel this is a dangerous Miami Heat team playing their best basketball of the season and a team primed to give the Milwaukee Bucks a real battle here in the second round of the playoffs. Miami matches up very well with Milwaukee. The Heat has an array of 3 point shooting weapons along the perimeter. The one sore spot with the Bucks is their 3 point defense which isn’t as strong as their defense in the interior which is as good as any team in the NBA.

Duncan Robinson, Tyler Herro, Goran Dragic, Kendrick Nunn, and Jimmy Butler are all capable of knocking down shots from beyond the arc for the Heat and that’s an area where Miami can have success and the Heat have the perimeter weapons to exploit that Milwaukee weakness.

On the flip side, Miami’s defense in transition is one of their best and strongest attributes and that matches up well with Milwaukee who feasts on fast break points and getting their offense before the opposing team can set up their defense in the half-court. That’s another plus for Miami in this series.

The final factor in Miami’s favor is that the Heat have size and length in the paint to at least harass Giannis Antetokounmpo to a certain degree with the likes of Bam Adebayo and Kelly Olynyk in the low post and that duo proved to be reasonably effective with their interior defense on the Greek Freak during the regular season matchups between these two teams.

Some bettors may be attracted to the long-term Milwaukee Bucks ATS trend off a loss which has been a winning proposition but I am not going to be one of them. Miami is a very live underdog in this series and they are live once again here in Game 2. I like Miami plus the points and I also lean to the Over in this game noting that Milwaukee is 5-2 to the Over in their last 7 games after a loss.