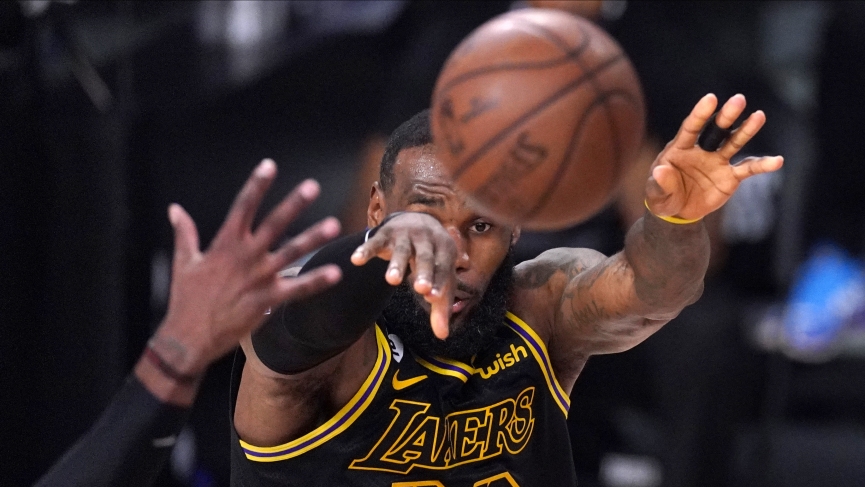 The Houston Rockets were ambushed in the first half of Game 2 by the Los Angeles Lakers who stormed out to a 36-20 lead after the 1st Quarter and a 67-51 lead at Halftime. They did it by literally throwing the Houston Rockets off course by switching up defenses and playing zone defense against the Rockets.  It completely flummoxed and shook up Houston as their entire offensive game disintegrated in the first half.

Houston couldn’t find open looks throughout the first half and when they couldn’t, they panicked and got sloppy with the basketball and it kept up for most of the game. Houston committed a whopping 17 turnovers in the Game 2 loss and the LA Lakers turned those 17 turnovers into 27 transition/fast break points in their 117-109 win. It was the major difference in the end result. Russell Westbrook was the biggest culprit as 7 of those 17 Rockets turnovers came from him. He has 4.4 assists to 4.2 turnovers so far in the playoffs since his return which is not the kind of ratio that any point guard wants to have.

As good as the LA Lakers were in the first half against Houston, they came out of the Halftime break flat and lethargic. They allowed the Rockets to get their shooting rhythm going as Houston started hitting 3 point shots in bunches to begin the second half and suddenly came all the way back from that 16 point deficit at the half to take a lead late in the 3rd Qtr. The Lakers got complacent and let their foot off the gas pedal for just a bit and the Rockets made it a competitive game once again as a result.

..But The Show Must Go On 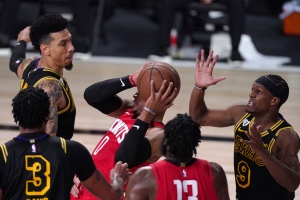 The Lakers did steady the ship in the 4th Quarter rallying back to get the win and cover in Game 2 thanks to strong performances down the stretch by LeBron James, Anthony Davis, Rajon Rondo, and Markieff Morris who made some clutch shots and big buckets to put the game away for the Lakers.

The Lakers somehow despite a massive size advantage in the paint, lost the battle for paint points to the Rockets in Game 1 but they turned it around in a big way in Game 2. They outscoring Houston 54-26 in the paint and were also +6 on the glass after the Rockets were able to hold their own in the rebounding battle in their Game 1 victory over the Lakers.

Anthony Davis played like the low post monster he should be in a series like this against an undersized, smaller Houston Rockets lineup. Davis erupted for 34 points to go with 10 rebounds, four assists, and a blocked shot in Game 2 and dominated the game at both ends of the floor.

It was a lot closer than I would have liked but I did manage to cash a ticket with the Los Angeles Lakers -5.5 in Game 2 as I recommended on Sunday in my NBA video and article combo for Odds. However, in Game 3, I am shifting gears and looking toward the Houston Rockets at +5 in this one.

Houston played a brutal first half and was totally paralyzed by the surprise LA Lakers defensive scheme and it took them a while to figure it out. Once they did, that is when the game suddenly got much closer and tighter in Game 2. The Lakers continue to at times have trouble playing a complete 48-minute performance and this goes back to the first round against Portland as well.

Houston was about as bad as they could be in the entire first half of Game 2 and yet they only lost by 9 points when all was said and done. I expect a better performance from Houston especially out of the gate. I also like this game to stay Under the total of 224. Some bettors may think Houston correlates with ‘Over’ due to their fast pace and propensity for shooting a lot of 3’s but the Rockets are actually 4-1 to the Under in their five previous playoff wins.

27 Of the Lakers points in Game 2 were transition points off turnovers which went a long way to sending that game Over the total although it barely squeaked up and Over the total landing at 226 total points. If Houston can take better care of the basketball in Game 3 and they can be expected to work on improving and correcting that heading into this game, it will slow the pace down a bit and lead to fewer fast-break opportunities. I’ll go with Houston +5 and also Under 224 in Game 3 between the Lakers and Rockets at Fanduel Sportsbook.