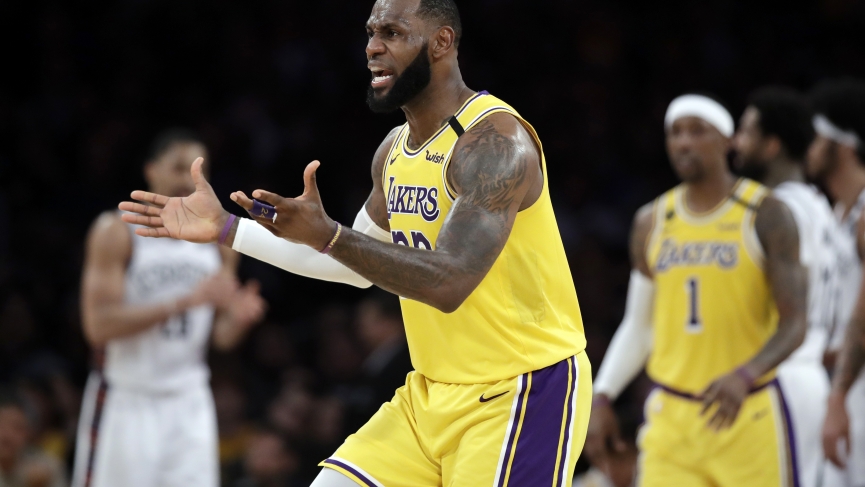 Before the start of the 2019-2020 NBA season, there were tons of bets that flooded sportsbooks all over in support of the Los Angeles Lakers (+250) capturing a championship. Once Anthony Davis was added to the equation, bettors pounced. They’re rounding out the majority of sportsbooks as favorites to represent the Western Conference in the NBA Finals. Some books (like Draftkings) even have them tied with the Milwaukee Bucks(+250) for best odds to win it all.

Then, the tragic death of Kobe Bryant surfaced and the basketball world mourned. The pain was seen around the Lakers organization. The city rallied in support, hopeful of a 2020 championship to honor Bryant’s life and meaning to the city. Next, more bettors flooded sportsbooks with Lakers future championship wagers, thinking that the loss they experienced would fire up the club to win one for the Black Mamba.

Some of us are rooting for the storybook ending. In fact, they’re the ones that make us feel good. In what would be a magical moment to tribute a fallen hero, can the Lakers finish off this disruptive season and cap it off with a title? The Mamba mentality is surging through Los Angeles, but will it be enough? I hate to rain on your parade, but there won’t be a classical ending to this, and here’s why.

How The Lakers Stacked Up Against Top Contenders

The Lakers have played the dominant part this season. They lead the Western Conference at 49-14, second-best to the Bucks (53-12) overall. They’ve had no issues winning on the road, but they’re looking to have home-court advantage throughout the conference playoffs, leading the second-place Los Angeles Clippers by 5.5 games. For what it’s worth, the Lakers are 1-1 against the Bucks, 1-2 against the Clippers, and 1-1 against the Houston Rockets this season.

Please, excuse me for excluding the Denver Nuggets and Utah Jazz from the conversation. They’re both excellent teams, but it’s hard to take them seriously in the playoffs. The stars on those teams just don’t compare to the ones mentioned above, so until they actually make some noise, I can’t possibly mention them in the same breath.

Some stats that really pop out are the Lakers three-point (35.5 percent) and free throw percentages (73.0 percent). They rank behind the Clippers, Rockets, and Bucks in free throw shooting and only beating the Bucks in three-point shooting. In today’s game, it’s obvious that the three-ball is very important. Making free-throws has always been pivotal when finishing off close games, so these stats are a bit unsettling.

When looking into some of the advanced stats, it remains close. The Lakers rank behind the Rockets and Clippers in offensive rating but rank ahead of them in defensive rating. The Bucks continue to dominate defensively and lead the league in rating. Thinking that the Lakers are heads above the rest is a bit naive. These potential matchups for the Lakers could get more challenging each round.

History Will Repeat Itself

LeBron James is still producing at an elite level. He’s well-rested with this layoff, which seems important at his age. King James has all the postseason experience that could ever be needed, so how does this equal the Lakers coming up short? Let’s see what history has to say about this.

When James left Cleveland for the first time back in 2010, the decision was made. He, Dwyane Wade, and Chris Bosh were at the height of their game, taking the league by storm together with the Miami Heat. They went to four straight finals and won two of them, but how did their first season together turn out? They lost to the Dallas Mavericks in the Finals.

Next, James leaves Miami for Cleveland in 2014. James joined Kyrie Irving and Kevin Love in an attempt to bring Cleveland their first championship. They rallied to the Finals in their first year together. Ultimately, they came up short to the Golden State Warriors. Are you seeing the trend now?

Davis joining James in Los Angeles equals the best teammate that the King has ever played with. Davis’ skillset is unlike any other that James has played with before. So, Davis is absolutely an upgrade as a sidekick for James. The only issue here is that Davis has little postseason experience.

History would seem to show that James needs more than one season with a new cast of teammates to win it all. This isn’t that shocking when you think about it. Kentavious Caldwell-Pope, Alex Caruso, Kyle Kuzma, JaVale McGee, and Rajon Rondo are the only returning teammates from the 2018-2019 season, meaning that this current unit had a lot of learning and growing to do. This time away from sports is certainly beneficial for health, but it doesn’t help a team that needs consistent time together to groove before the postseason.

No Parade For Kobe

The respect shown all over the league for Kobe and his family has been remarkable. The city really needs a pickup after experiencing the loss of a hero. Capturing a championship the same year that Bryant’s life was tragically ended would be oh so fitting. Unfortunately, the fairytale ending won’t happen this time.

The city will have plenty to look forward to in the coming seasons, as James and Davis will headline the organization for years to come. Look for history to repeat itself, as James and the Lakers come up just short in the playoffs. They could lose in the Finals, or even come up short in a competitive Western Conference Finals battle. Either way, the Lakers won’t be celebrating Kobe’s life with a parade after the Finals conclude.

We miss you Kobe! Thank you for your greatness, intelligence, words of advice, dedication to excellence, and for giving us all a piece of the Mamba Mentality.