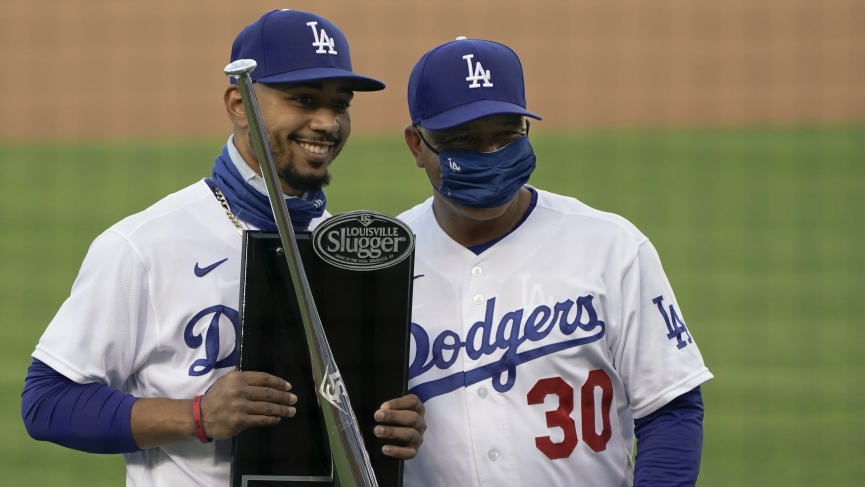 My LA Dodgers at LA Angels pick sets the tone for the opener of this weekend’s Freeway Series, arguably the deepest lineup in Major League Baseball going up against the Los Angeles Angels and Mike Trout, who is without question the best individual talent on the big league scene since he arrived for his first full season in 2012.

Adding to the intrigue for bettors is a matchup of lefties for Friday’s series opener at Angel Stadium, pitting veteran Clayton Kershaw (1-1, 3.60) of the Dodgers and rookie Patrick Sandoval (0-1, 2.70) of the Angels. The contest will be carried nationally on FS1 with a 9:40 p.m. (ET) first pitch, and to nobody’s surprise, Kershaw and the Dodgers have pronounced favorites at FanDuel on a -174 price. Friday’s scoreboard target has been set at 9 runs, the ‘over’ slightly favored.

Kershaw Given Extra Day Off

Los Angeles just split a 4-game series at home with San Diego, dropping the first two games before dominating in Games 3 and 4 by outscoring the Padres 17-2. The Dodgers pounded six home runs in the finale on Thursday, Mookie Betts clubbing three of them to tie the MLB record with his sixth 3-HR game. The 11-2 contest that closed the set ended LA’s string of 4-straight ‘under’ winners on the MLB odds. 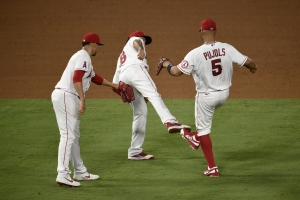 Following a brilliant season debut against the Diamondbacks in Arizona, Kershaw ran into trouble with the long ball last Saturday at home in a 5-4 loss to the San Francisco Giants. The southpaw struck out six for the second consecutive outing, but also served up three home runs and failed to make it through the fifth inning. Including his postseason work last October, Kershaw has allowed 33 homers in his last 33 outings.

Kershaw missed the Angels a season ago, with Friday’s clash his 10th career start in the rivalry. He suffered through a couple of beatings in Anaheim early in his career but has won his last two starts at the Big A with 14 combined innings and only one earned run crossing the plate. Albert Pujols has a career .375 average (12-32) in their confrontations, while Kershaw has limited Mike Trout to only two hits in 13 at-bats (.154).

Joe Maddon’s gang enjoyed a day off before the start of this series that finds the Angels 5-games behind the Oakland A’s in the AL West. They just took two of three from those A’s by flexing their muscles with nine homers in the series to move to the top of the American League in that department. Anthony Rendon went yard in all three games, reaching base in eight of his 14 plate appearances.

Sandoval was a tough-luck loser his last time out, getting no support in a 2-0 defeat in Texas against the Rangers this past weekend. Joey Gallo accounted for all of the scorings in the contest with a 2-run homer, Sandoval making it through six innings for the first time in his career. He failed to make it through the fifth prior to that, tossing four innings of 1-run baseball in a 10-2 Angels win at home over the Seattle Mariners.

Friday will be his first time to face the Dodgers and just the second interleague appearance. Sandoval made his MLB debut last August as the bulk pitcher in a 5-inning relief appearance against the Reds in Cincinnati. The only two runs Sandoval allowed came home on wild pitches.

‘Under’ A Big Winner In Recent Years

Believe it or not, it’s the Angels who have the overall advantage in this interleague rivalry against their Senior Circuit cousins from Tinseltown. The clubs have met 124 times with the Angels winning 70 of those matchups for a crisp little.565 win percentage. The Anaheim side has been especially dominant in recent years with 12 triumphs in the last 18 matches, and eight of the last 10 at the Big A. Last year’s four meetings all went to the Angels, and each of the last 11 meetings failed to reach the totals.

An excessive heat warning has been issued for Anaheim on Friday, and according to the weatherman, the thermometer will still be in the low-90s when the game gets underway at 6:40 p.m. local time. The sun will set about an hour after the first pitch, with clear skies and a light SW breeze (out to center) also part of the forecast.

In sweeping the Dodgers last season, the Angels picked up some nice cash for their backers as +160 underdogs or better in each of the four dubyas. They make for a tempting play as +150 underdogs on the money line in Friday’s skirmish, but the hot temps have me playing over’ 9 in the series opener.