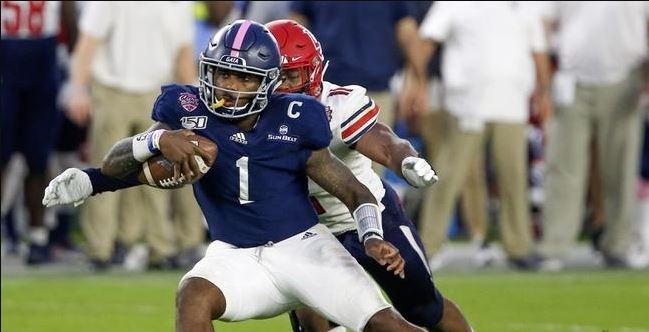 The first of two games on Thursday night in College Football comes from the Sun Belt Conference. South Alabama takes on the Georgia Southern Eagles. The Jaguars are coming off a 38-14 win over Louisiana-Monroe last week and opened up as +7 point underdogs to Georgia Southern. Since the line on this game opened, the Jaguars have moved from +7 all the way down to as low as +3.5, with the total moving north of the opening number of 49 to 51.

Georgia Southern is one of the country’s heaviest rushing teams, currently ranked 13th in the country at 248.6 yards per game on the ground. The Eagles utilize the triple option very effectively and are riding a 6-0 home winning streak going back to 2019.

Georgia Southern’s starting QB Shai Werts was injured last week against Coastal Carolina. Leaving with what looked like a non-contact injury, but returned to the game a short time later. He remains questionable for Thursday’s game.

The Georgia Southern Eagles are a very slow-paced team, and if they are missing their starting quarterback, they may play even be slower paced on Thursday. This may be a big issue for Eagles bettors, as Georgia Southern might not have the same style of offense with their back-up QB in the line-up. Georgia Southern’s defense has looked relatively good, and when you have a solid defensive team that leans heavily on the run, it all leads to backing the Under in a game like this one.

Both teams like to run the football, and as Jimmy the Bag points out, this total opened at around 50 and then ticked down to 49.5, but has since shot up north of 50 again, and sits as high as 51.5 at some licensed American sportsbooks. These are two slower-paced teams that like to run the football, while both teams have an average passing offense. With that in mind, all signs point to the under.

As for the side, it may have been a little bit too many points for the Jaguars earlier in the week at +7, but it seems like the market has adjusted that line to where it should sit, currently at around +4 or +3.5 depending on where you line shop. Georiga Southern has won their last 6 games hosting South Alabama. Last year was a 20-17 win for the Eagles, which was the first time in any recent memory that these two teams played an even relatively close football game. This is a team struggling with 6 years of embarrassment to Georgia Southern, and as John Ryan says, revenge is overrated, but it’s not overrated here.

Another glaring factor is ‘strength of schedule’. Georgia Southern hasn’t played any team remotely close to any of the opponents South Alabama has played based on the various professional originating power ratings.

Jaguars vs Eagles: Measure of Expectations

Based on the measure of expectation, South Alabama has performed up to par. Having won both games in which they were favored this year, and going 1-2 outright as an underdog. Winning their first game of the season as a +380 long shot against Southern Miss.

As for Georgia Southern, they’ve had a few squeakers so far in the 2020 season. The Eagles beat Campbell by just 1 point in week one, a surprising outcome for a team that was lined as high as -10,000 to win outright. Their next game played as a favorite was against UL Monroe, lined at -1250 on moneyline, only winning the game 35-30. They took care of business against UMass 41-0, as they should at -5000. However, the fact remains, this is a team that has barely squeaked by when it comes to a few games that they should have won easily. At the end of the day, South Alabama is far more capable than what the market is giving them credit for. With that in mind, it should be a dog or pass spot for this NCAA Thursday nighter.