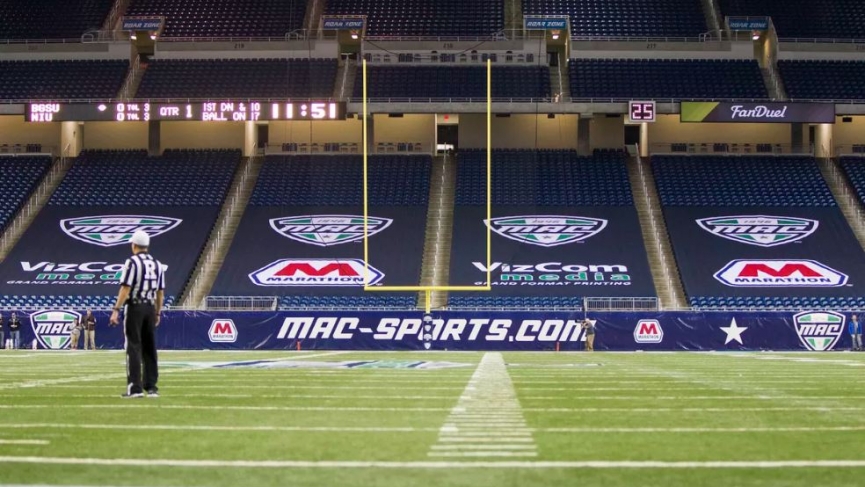 In nature, cardinals and bulls coexist peacefully. That won’t be the case on the Week 16 college football betting schedule when the Ball State Cardinals collide with the Buffalo Bulls to decide matters in the Mid-American Conference Championship.

Both teams had solid campaigns, combining for 10 wins and just one loss. Only one of them can win Friday night in Detroit, and the numbers at FanDuel opened with Buffalo as 13½-point favorites on the spread. Bettors playing the total are looking at 67½.

Mike Neu’s group rebounded from a season-opening loss at Miami-Ohio by winning their next five games to claim the MAC West title. Other than a 25-point win at Central Michigan, nothing came easy for the Cardinals with the other four victories by a combined 19 points.

They were without leading rusher Caleb Huntley over the final three games due to an undisclosed injury, and he’ll be absent Friday after making the decision to opt out of the rest of the season. Ball State locked everything up this past Saturday with a 30-27 mild upset of Western Michigan.

How Buffalo isn’t at least 25th in the latest CFP rankings is beyond me. The Bulls ran roughshod – literally and figuratively – over all five of their opponents, the average score about 52-21 with four of the straight-up wins covering the NCAA football spreads. Buffalo leads the nation in rushing with nearly 345 yards per tilt, more than 200 of those courtesy of junior tailback Jaret Patterson who topped the 1,000-yard plateau in just five games. The Bulls also did a great job protecting the pigskin, turning it over just three times.

ESPN will televise the clash from Ford Field. Buffalo is appearing in its second MAC Championship in three seasons while Ball State makes its first appearance since 2008. It’s the first meeting between the two in three years, the Bulls posting a 40-24 win at Ball State then that fell a bit short of a -16½ spread. A year earlier, the Cardinals grabbed a 31-21 win in Buffalo that also came up just short of an 11-point spread.

Cold temps outside in Motown won’t be an issue under the dome at Ford Field. It’s a big number to cover, but then, Buffalo’s ground attack is a big problem for Ball State to stop. I’ll lay the -11.5 on Buffalo for my NCAAF pick and watch the Bulls grind out a 37-20 decision.