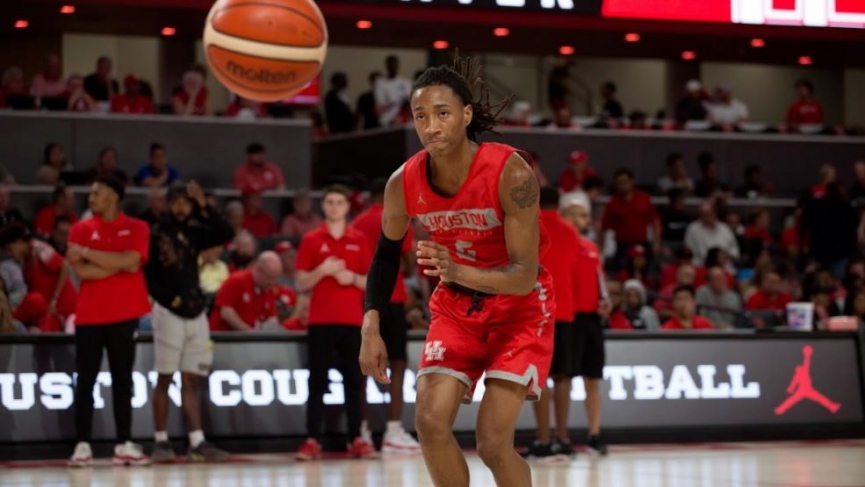 South Carolina vs Houston Pick- College Basketball Dec 5th: Kelvin Sampson and No. 10 Houston passed their first big test with a solid performance against Texas Tech. Now we get to see if the Cougars can maintain that same intensity against a South Carolina Gamecocks crew that started 2020-21 on the bubble for the NCAA Tournament.

A bit or a rarity in sports these days, we should see about 2,000 fans spread out inside Fertitta Center in Houston for this 6 p.m. (ET) interconference tip. FanDuel opened the wagering proceedings with the Cougars giving up 10½, and 141½ for the scoreboard target.

Gamecocks Win One, Lose One at HOF Classic

This would be a huge feather in the cap for Frank Martin and the Gamecocks. South Carolina was showing up in the 60-70 range in early season rankings, meaning Martin’s cagers will need to impress the Selection Committee along the way to get an invited to the Big Dance.

It didn’t help falling to Liberty to begin the Hall of Fame Classic in Kansas City last week. The Gamecocks were favored by 7½, and came out flat while the Flames scorched the nets from 3-point range to build a 17-point first half lead on their way to the 78-62 upset. South Carolina was outscored 33-9 from outside the arc.

The Gamecocks did manage to leave KC with a win, beating Tulsa 69-58 as 2½-point favorites. South Carolina broke open a tight game with a 15-0 run midway through the second half in a game that saw both sides commit two dozen turnovers. Led by Jermaine Couisnard’s 20 points, the Gamecocks tightened up the defense and shot much better than against Liberty.

Houston has shown why it was picked to win the AAC in every preseason poll, reeling off three strong wins to begin the season. An 89-45 rout of Lamar at home was followed by a 68-58 decision over Boise State. The Cougars led the Broncos by as many as 20, but came up short in the end of covering the -12½ on the NCAA basketball odds board.

Sampson’s squad then made the short drive up to Ft. Worth this past Sunday to face a Texas Tech team that was ranked No. 14. Underdogs of 3 points, the Cougars led from start to finish for a 64-53 triumph. Houston started hot with an 18-point lead about 12 minutes into the contest.

Caleb Mills was expected to be the offensive force, but it’s fellow sophomore Marcus Sasser who is leading the way with 17.3 PPG. Sasser has also shown off his sharpshooting by connecting on 12 of his 24 tries from beyond the arc.

It’s the second consecutive season the two have met, Houston going into Columbia last December and coming home with a decisive 76-56 win. The Cougars were favored by 2½, and never trailed the entire game. The all-time series is tied at three wins apiece, and Saturday marks the first time the Gamecocks have played in Houston since February 1975.

Houston’s suffocating defense is already in midseason form, and the Cougars could win by 20 again. Their first three have been easy ‘under’ winners, and that’s the way I’m going with a free college basketball pick.