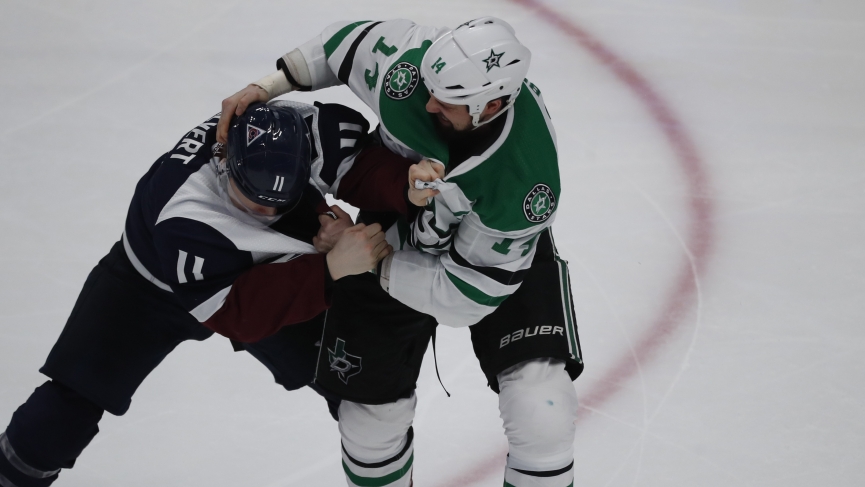 Game 5 really was an “Avalanche” in the 1st Period

The Colorado Avalanche delivered an “avalanche” of goals in Game 5 and sent a clear message to the Dallas Stars that they aren’t going away quietly in this series in a dominant 6-3 win. Colorado played their best and most complete 60-minute performance of this entire series roaring out of the gate with 5 unanswered goals in the 1st Period to take a 5-0 lead in the first 20 minutes of the game. The Avs were buzzing in the Stars zone for the entire period and they outshot Dallas by a whopping margin of 23-5.

Quite simply, the Avalanche brought the sense of urgency to the start of Game 5 with their season hanging in the balance and the Stars didn’t. Colorado was winning all the battles for loose pucks early in the game and it led to several of their goals. They blitzed Dallas Stars starting goaltender Ben Bishop making a surprise appearance and his first start of the series in place of Anton Khudobin who was given a well-deserved rest with the teams playing on a back-to-back in Game 5. However, the rest didn’t last long as Bishop was pulled from the game after giving up the first four goals to give way for Khudobin.

The Big Guns Were Firing

Andre Burakovsky had two goals and an assist for Colorado while Nathan MacKinnon and Mikko Rantanen each added a goal and an assist. The Avs also got goals from Nazem Kadri and Pierre-Edouard Bellemare in the victory. It was the type of performance we haven’t seen from Colorado since the last couple of games of their first-round series against the Arizona Coyotes when they thrashed them by a combined score of 14-2 in Game 4 and Game 5 of that series.

Dallas did steady the ship to a certain degree in the last two periods after falling behind 5-0 after the opening frame as they did outshoot Colorado from that point onward but they simply dug themselves too big of a hole. Dallas had their worst defensive game of the series for sure suffering multiple breakdowns and giveaways throughout the game especially in that disastrous 1st Period. Of course, Dallas played almost the entire 1st Period stuck in their own zone unable to clear pucks out against the very staunch Colorado forecheck.

The Return Of Hutch

Michael Hutchinson was a shocking announcement as the starting goalie for Colorado in Game 5. Hutchinson is the 3rd goalie on the depth chart behind injured #1 goalie Philipp Grubauer and #2 netminder Pavel Francouz who started Game 2, 3, and 4 but was ruled out for Game 5 because he is dealing with an undisclosed injury that kept him from playing in the game. Francouz is questionable for Game 6 and if he isn’t ready to return, it will be Hutchinson back in net for the Avalanche. His performance is a tough one to evaluate. Colorado won 6-3 but the Avalanche provided him with a huge 5-0 lead and plenty of goals so that he could be comfortable and not feel the pressure.

Hutchinson is a goalie that has struggled mightily in his last couple seasons in the NHL He bounced around from the Winnipeg Jets to the Florida Panthers to the Toronto Maple Leafs and now here with the Colorado Avalanche. He still gave up one really bad goal through the legs and I still worry that if he’s asked to step up in a close game (and there is a good chance this game could be much closer than Game 5) and make big saves, he is still a giant question mark in that department.

I won’t bet against the momentum of Colorado following that Game 5 win. They finally played their best game of the series and it was too much to handle for Dallas. If I’m betting a side here, I’m looking toward Colorado at a reasonable -125 moneyline price. I will be betting this game Over the total for sure. There is no need to mess with what’s been working. I have cashed five straight Overs in this series.

Neither team has been able to shut down or neutralize the opposing team even a little bit. I see no reason that changes especially with tons of suspect goaltending showing up on both teams throughout this series. Each and every game so far in this series has had at least 7 total goals scored. The Over is 7-0 in Dallas last seven games and the Over is 6-1 in Colorado’s last seven games. If ain’t broke, don’t fix it. For the sixth straight game in this series, I’m betting the Over.