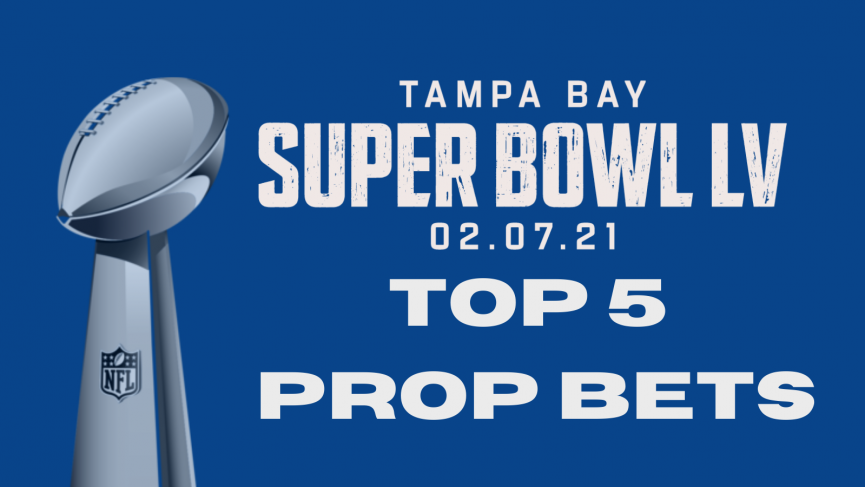 Superbowl LV is around the corner and it’s time to list the top 5 Super Bowl LV Prop Bets. As everyone is getting ready to watch the big dance between Kansas City Chiefs and Tampa Bay Buccaneers, I’m busy finding prop bets that can pay for your Super Bowl watch party. Here are 5 of my favorite props for the big game that could put money in your pocket and make Super Bowl LV betting that much more fun.

#1 – Super Bowl LV Prop Bets – How long will it take before either team scores?

Time of first Score: Score on or AFTER 5 minutes elapsed -120
On its opening possessions in the regular season, Kansas City had 7 Punts, 1 turnover, 4 touchdowns, 3 field goals and note a couple of the scoring drives took over 5 minutes to complete. Most of the time if you get a punt on the opening possession, you will cash the no-score prop.

Last year, during their Superbowl run, Kansas City punted on their opening possession in all three of their games. This year they punted on their opening possession against Buffalo and scored a touchdown to open the game against Cleveland. Note, the no score in the first 5 minutes prop did cash in the Cleveland game as the drive took 5:49 to complete. 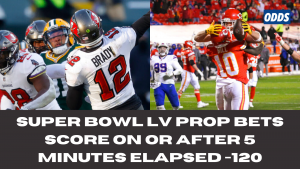 After giving up 203 receiving yards to Tyreek Hill in the first quarter and 17 points, I would expect the Buccaneers’ gameplan, at least early, to make sure everything stays in front of them and to try to force Kansas City to be patient by running the ball and taking short completions which in turn eats clock.

Tom Brady will be playing in his 10th Superbowl. In his first nine, his team only scored points in the first quarter once which means they did not score in the first 5 minutes of those contests. The first meeting between these two teams where Kansas City led 17-0 after one should help this prop.

When Brady, with New England, beat Kansas City in the AFC championship game a couple of years ago, they scored on their opening possession which took 15 plays and 8 minutes off the clock. All their first-half possessions had at least 8 plays showcasing a ball-control strategy which would not be surprising if it were implemented in this game.

#2 – Super Bowl LV Prop Bets – Will either team score a touchdown from the 1-yard line?

Shortest Touchdown scored: Over 1.5 yards +100
The ‘under’ 1.5 has cashed in 6 of the past 8 years which probably has something to do with why that side is favored. Aside from marching the ball to the one-yard line, you can also get endzone pass interference penalties. For the most part, in the playoffs, the referees have not been calling many penalties and I would expect that to continue in the biggest game. 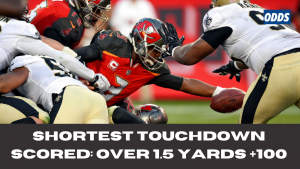 There are likely to be 6 or 7 touchdowns scored in this game and the prop for the number of touchdowns scored is 6.5. Yes, the total of 56 would equal 8 touchdowns but you can’t assume these teams will be perfect in the red zone. Tampa Bay and Kansas City rank 11th and 12th respectively in red zone TD percentage both at less than 66%.

Let’s assume seven touchdowns are scored, you would need one (14%) of them to be from the one-yard line and I highly doubt Kansas City will score a touchdown from the one. In 15 regular-season games with Patrick Mahomes at quarterback, Kansas City scored 52 offensive touchdowns of which three (5%) came from the one-yard line and one of those three was from Backup quarterback Chad Henne in a blowout game against Denver. They did score a touchdown from the one in both their playoff games but I’d rather trust their longer track record of not doing so in the regular season.

For the ‘under’ to cash, Tampa Bay will likely have to be the team that scores a touchdown from the one. 11/57 (19%) offensive touchdowns Tampa Bay scored in the regular season occurred from the one-yard line and just 1/10 touchdowns in the playoffs.

Kansas City is favored and I expect them to win the game thus if we project seven total touchdowns, suggesting Tampa Bay scores three seems fair. 1/3 (33%) Tampa Bay touchdowns coming from the one-yard line seems unlikely considering their percentages. Take the ‘Over.’

How To Bet Super Bowl 55

Patrick Mahomes Over 28.5 completions +100
If you go by Mahomes completions in the regular season, this would be a slight premium considering he averaged 26 completions per game. That said, he did have a season-high 37 completions in the first meeting against Tampa Bay and I would expect him to get to 30 in this contest. I believe Tampa Bay will attempt to force the Chiefs to take short completions and slowly move the football down the field thus from a game script perspective this prop makes sense. 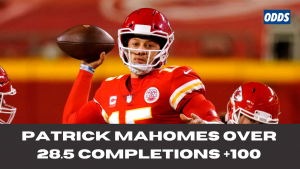 Kansas City is also likely to be encouraged to play the short passing game because Left Tackle Eric Fisher was injured against Buffalo and will miss this game. Last week vs Green Bay, Tampa Bay was able to sack Green Bay quarterback Aaron Rodgers five times which tied a season-high in sacks allowed for Rodgers. Tampa Bay was able to sack Mahomes twice in the first meeting.

If Kansas City is behind they will be encouraged to throw and if they are ahead, they will likely continue to throw because they aren’t likely to have much success running the ball. Tampa Bay ranked number one in the NFL allowing a paltry 3.7 yards per rush attempt. 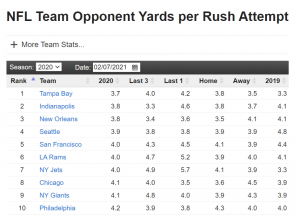 In the first meeting between these two teams, Kansas City running backs Clyde Edwards-Helaire and Le’Veon Bell combined for 16 carries and just 59 yards (3.7 YPA). No surprise if Mahomes utilizes the short passing game and ends up racking up the completions. 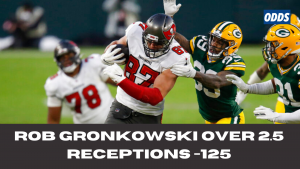 Miami tight end Mike Gesicki caught 5 passes for 65 yards and two touchdowns. Considering all the skill position talent on the Buccaneers, it’s not like Kansas City can focus on Gronkowski thus I would expect him to once again have a good game.

Mike Evans to score a Touchdown anytime +105
Tampa Bay wide receiver Mike Evans scored a touchdown in 10/16 regular-season games and had three two-touchdown games. After not scoring in the opening round of the playoffs, he has scored in each of the past two weeks.

That makes Evans 12/19 (63%) scoring touchdowns this season, he has been one of the most targeted players in the red zone, and note one of his three 2 score games was against Kansas City thus at plus money he is worth a bet.

As discussed earlier, I’m expecting the tight ends for Tampa Bay to do well thus taking Gronkowski +160 to break the postseason touchdown record by a duo with Brady or sprinkling on Brate +333 are other touchdown props worth considering for Super Bowl LV prop bets.