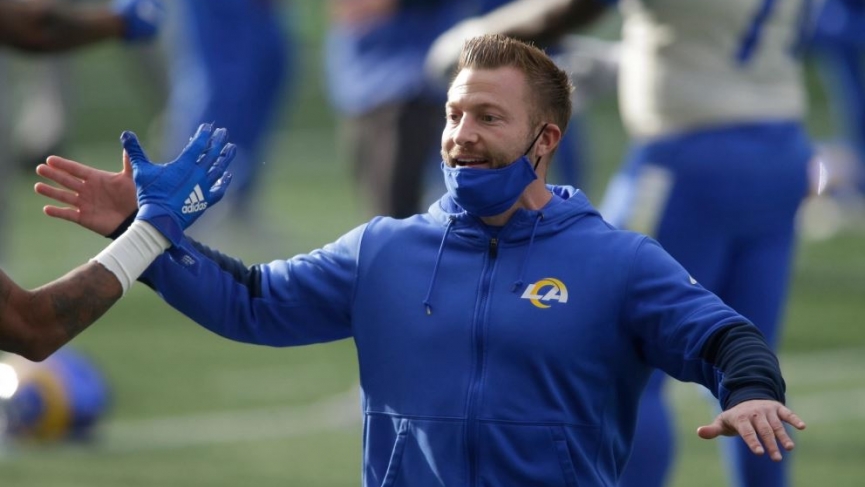 LA Rams vs Packers Predictions | January 16, 2021 | NFL Playoffs: Sean McVay and the LA Rams have only been lined as an underdog 14 times since McVay was hired in 2017 and are 8-6 ATS as a dog since then. Meanwhile, the Green Bay Packers come into Saturday’s NFC Divisional Playoff game riding an 11-6 ATS streak as the home favorite, going back to when head coach Matt LaFleur was hired in 2019.

Since Sean McVay was hired by the LA Rams in 2017, the Rams have covered 21 of their 34 road games, covering by an average of +4.2 points per game. As for Green Bay, the Packers have had recent historical success in the NFL playoffs, going 6-2 ATS in their last 8 playoff games, and are 7-2 ATS in their last 9 games in January.

The Rams are 4-2 ‘Against the Spread‘ as the betting underdog this season, picking up outright wins as the dog twice over the Eagles in week two and the Buccanneers in late November. The Rams reached the NFL Divisional Playoffs by defeating the Seattle Seahawks as +150 road underdogs, winning 30-20.

The Packers went 8-5 ATS as the betting favorite in 2020, losing just two games outright on the chalk line. The Packers lost 38-10 to the Tampa Buccaneers, who were +125 home dogs in week 5. Two weeks later the Packers lost to the Vikings 28-22, in a game where Minnesota ere lined at a hefty +220.

Based on the measure of expectation, you have to give a big edge to the Packers in this game. Bettors who have backed the opponent of the Rams in every game this season have gone 6-11 for +4.78 units profit. A $100 bettor fading the Rams on the moneyline in every game this season would have profited +$28 per game, win or lose. Needless to say, if you’ve already cashed this season betting against Los Angeles, you may as well keep the train rolling. The only problem is, the Packers are -300 favorites, and that’s after money has come in on the Rams, moving that Packerse moneyline to where it is now, which is relatively unbeatable.

This game is a classic offense vs defense match-up, with the Rams coming in as the #1 ranked defensive team overall, allowing just 281.9 yards per game, on average. While the Packers come into this one as the #5 ranked team offensively, putting up 389 yards per game, including an average of 256.6 yards per game through the air.

Injuries are going to be a factor for both teams on Saturday. The Rams are without fill-in QB John Wolford, who is out due to a ‘stinger’ suffered in the Rams game vs the Seahawks last weekend. To go along with that, Jared Goff who is coming off thumb-surgery just two weeks ago, is currently listed as ‘probable’ due to reagrevating the thumb last weekend when he was forced to come in for the injured Wolford. To make matters even worse, the Rams’ and the NFL’s best defensive player Aaron Donald is listed as probable with a rib injury, and even if he does play, rib injuries are debilitating and extremely hard to overcome. To top off the list of woes for the Rams, WR Cooper Kupp tweaked his knee at the end of last week’s game against the Seahawks, and is currently listed as questionable.

As for the Packers, they too have a long list of players on the injury report, but none more impactful than left tackle David Bakhtiari, who will miss the game with a knee injury. With Bakhtiari out of the line up, if there is a chance that Aaron Donald is healthy and unaffected by his rib injury, the Rams should be able to break through the Packers’ offensive line, and make it a very miserable afternoon for Aaron Rodgers.

The Packers are the type of team that are not exactly as good as their record indicates, as they’ve played quite a soft schedule this season, and have managed to win games by holding on to the ball and using the clock in their advantage, something that is not exactly as easy to do in the NFL playoffs.

If the Rams are able to shut down DeVante Adams, in the way that they were able to shutdown DK Metcalf, they will be a live dog in this game, simply because the injury to Bakhtiari makes the Packers and Aaron Rodgers vulnerable in the pocket, while will take time off the clock and give the Rams some hope to stick around in a game that could easily be a blow out if the Packers offensive is able to perform to their average numbers.

The best bet to make in this game is likely on the Under. This total opened at 46.5 and has since dropped to 45.5 and is still dropping. These two teams have a combined average of 48 total points per game between them this season.  If the Rams are healthy and are able to show up in this game, the clearest path to victory for them is to dominate defensively, frustrate Rodgers and slow the Packers offense down to a crawl. If the Rams are able to force the Packers to play a run heavy game, with receivers having to come out of the backfield in pitch-offs and side-line check downs. Ultimately, if the Rams defense is even close to as good as they have been all season, they should be able to contain Aaron Rodgers, as long as we don’t see an MVP type performance that has the Packers rolling, and up by multiple scores after the first quarter.

On the flip side, the Rams end up coming out and laying an egg. There is no better team that you want to have leading in a blow-out, in a game in which you hold a ticket on the Under, than the Green Bay Packers. The Packers are the best team in the NFL at holding onto a lead, they protect the ball when it matters, they never give up bad field position, and they are one of the teams in the NFL at using the clock to their advantage. With all that being said, it’s not exactly the same type of game in the playoffs. Every possession matters, and Sean McVay is one of the most creative coaches in the NFL. Something’s gotta give here.

This is another typical NFL betting scenario where the underdog is correlated to the Under, and the favorite is correlated to the Over. There is currently value on the Under, even at 45.5, because it seems as though that total is based on the expectation that the Packers will be able to put up points against this #1 rated Rams defense, so there may be a few points of value on the Under side of this total. Beyond that, if you’re fading the Packers in this spot, it’s probably best to wait and get the best of the number, as the market could come in on Green Bay when the Saturday casuals get to the betting window. Take the Under, and keep your eye on the Rams possibly moving to +7.