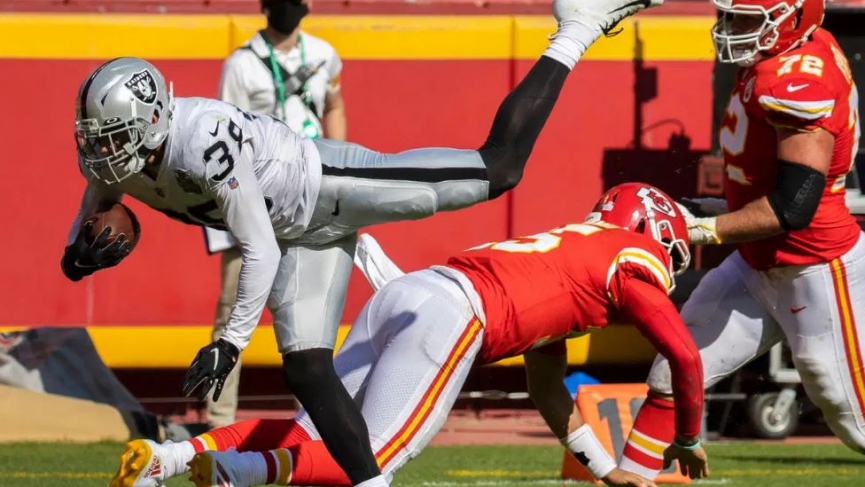 Kansas City Chiefs vs Las Vegas Raiders Pick – NFL Week 11: Kansas City has lost one game this year it came back in week five to Las Vegas thus this is a revenge game for them. In that contest, both teams were trading points the entire first half and were tied at 24. In the second half, however, Las Vegas’ defense stymied Kansas City forcing punts on Kansas City’s first three possessions and then intercepted Chiefs quarterback Patrick Mahomes. The Chiefs’ only second half score came late fourth in when down 16.

WEEK 11 MATCH-UP
Kansas city
las vegas
Opening ATS Line
-7 (-110)
+7 (-110)
Total
Over 56 (-110)
Under 56 (-110)
Where/When
Allegiant Stadium
Sun. Nov 22nd, 8:20 PM ET
Since that game, Kansas City has won utilizing several different styles offensively. They used a run-heavy approach to beat Buffalo rushing 46 times for 245 yards. They did very little offensively against Denver but were aided by their defense and special teams as both units scored a touchdown. They used an elite passing game to beat the Jets as Mahomes threw for 416 yards and 5 touchdowns. Before their bye against Carolina, they again relied on Mahomes who threw for 372 yards and 4 touchdowns. For the season Mahomes has a stellar 25/1 touchdown/interception ratio.

The biggest news for Las Vegas this week is that defensive end Clelin Ferrell tested positive for Covid-19. Along with Ferrell, six other starting defenders for Las Vegas were placed on the NFL’s Covid-19 list due to being in close proximity of him, thus they will not be at practice. They may play Sunday night assuming they can produce negative tests.

Las Vegas will have to score in this contest and it would be helpful to their defense if they could control the time of possession. They do rank third in the NFL possessing the football 32:16 minutes per game and insist on running the ball the 5th most times in the NFL. The Raiders can possess the football for long periods because they have the number one 3rd down offense converting 3rd downs at a 50.43% clip.

In the first meeting Raiders’ quarterback Derek Carr had season highs in yards, yards per pass attempt, and quarterback rating. He routinely found wide receivers Nelson Agholor and rookie Henry Ruggs III for big gains including a 59 and 72-yard touchdown pass respectively to each receiver. Note Ruggs III had been injured in the weeks preceding their first meeting thus when you consider he is also a rookie, perhaps Kansas City was caught off guard with his speed.

Defensively, Kansas City has been above average all year ranking 13th in yards per play and 7th in yards per pass attempt. They have given up more than 20 points just twice the entire year including the first meeting against Las Vegas. Las Vegas will need to put up similar numbers offensively to be competitive in this contest but hard to imagine Kansas City playing as badly as they did defensively in the first meeting.

My lean would be to lay it with Kansas City as they are the better team, off a bye, and should be motivated to level the score with Las Vegas. I would also lean ‘under’ 56.5 because I fully expect Kansas City, whose defense has been underrated all year, to make adjustments coming off their bye. Note last year the Raiders did not score more than 10 points in either meeting against the Chiefs thus the Chiefs are capable of slowing this offense down and if they can establish a sizeable lead, they won’t need to score much.