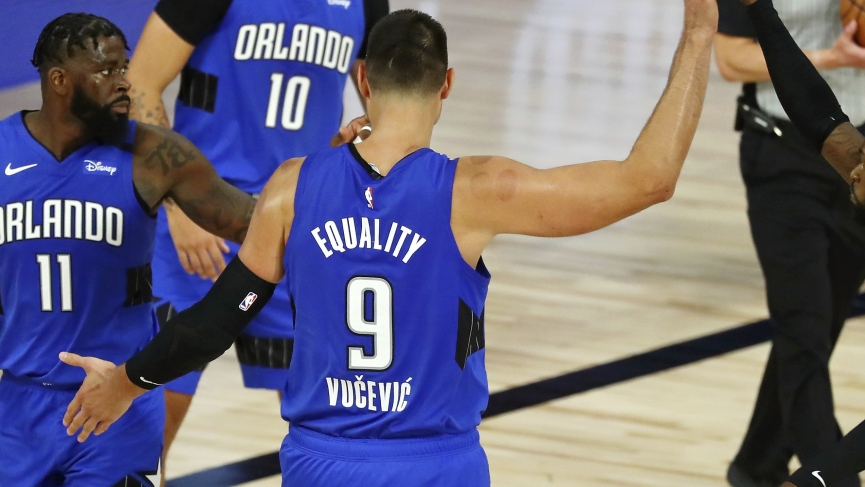 Today we take a look at my Orlando Magic vs. Milwaukee Bucks pick for game 2 of the NBA playoffs series. Deer caught in the headlights, that was a very appropriate expression to describe the dismal, lifeless and lethargic performance from the #1 seed Milwaukee Bucks in a 122-110 loss in Game 1. The Magic shot a blistering 49% from the floor in the victory with the Bucks defense getting carved up by Nikola Vucevic in particular who went off for a phenomenal 35 point performance on 15-for-24 from the floor. Milwaukee lacked energy throughout the game and often when you have a lack of that, it shows up at the defensive end of the basketball court and that is precisely where the problems were for Milwaukee in their Game 1 defeat.

Milwaukee’s George Hill had a very interesting quote following the Game 1 loss talking about the lack of a home crowd and being unable to draw on getting an emotional lift and energy lift from the fans when they were trailing for the majority of Game 1 against Orlando: “All year we’ve been thriving off our own fans; we don’t have that. We haven’t figured it out yet. When you get hit in the mouth, you gotta throw the next punch.” 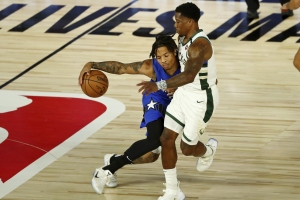 The only punches being thrown in Game 1 were by Orlando. They were hitting their shots and they made life tough on the Bucks at the offensive end of the floor too. Giannis Antetokounmpo had 31 points but it was a quiet 31 for him and the Magic did a great job of double-teaming him throughout the game and forcing him to commit multiple turnovers as well which fueled the Magic to get some easy buckets in transition at the other end of the court. Milwaukee had 16 turnovers in the loss and Orlando turned them into 25 points at the other end of the floor.

The Bucks who are normally a lethal team in transition only had 10 fast-break points in Game 1 which explains the entire game story. Orlando forced turnovers and turned them into points and easy baskets. Milwaukee didn’t. The defense was also the key for Orlando as explained by Nikola Vucevic: “Obviously, our main focus was try to make it hard on Giannis, to protect the paint. We did that as a team. Gary did a great job fighting him and we were able to help.”

Milwaukee is usually much better defensively in games where they allow 120+ points which is one of the main reasons why they have been an elite team in the NBA for the past couple seasons and I expect the Bucks to make the proper adjustments required to better guard an Orlando team that to be honest has struggled to put the ball in the basket consistently for the majority of the season.

Double-digit favorites have been a bad bet for the majority of the NBA restart here in Orlando and the Bucks have made it known that they have had trouble with energy lapses at times in their games. I’m not all that interested in laying -12.5 points with the Bucks for the full game here but I think Milwaukee comes out very angry and very strong early in the game though and that is where my focus is going to be for this game from a betting perspective.

Orlando had it too easy at the offensive end in Game 1 and I expect to see a defensively focused Bucks squad to take the court in Game 2 and make the proper adjustments to start the game to neutralize the Magic which in theory a defensive stalwart like the Bucks are supposed to do in a spot and situation like this where they are looking to avoid a 2-0 series deficit.

I expect the Bucks to be at their best early in the game and in case, they have one of those lapses again later in the game where they give up a 10-2 or 12-2 run to the Magic which has been a recurring theme for them in a lot of their games lately, then I won’t have to worry about it if it happens. I’m going to recommend Milwaukee in the 1st Quarter laying -4.5 points and expect them to get out to a moderate-sized lead after the opening 12 minutes of this game.