OddsHQ’s St. Louis Cardinals vs Milwaukee Brewers Pick for 9/15/20: The Cardinals are 24-14-4 on the 1st 5 moneyline since the start of 2020, but 15 of those 22 wins have come while at home. St. Louis heads into Miller Park on Monday night to take on the sliding Brewers. A team that might help the Cardinals get into the playoffs, as they face each other in 10 of their final 16 games.

Get used to seeing the St. Louis Cardinal and Milwaukee Brewers, they’ll be playing another 10 of the last 16 games of the season. Flaherty has a solid 3-1 record for St. Louis, with only eight walks in six games. Look for Flaherty to shut down Milwaukee, who has struggled at the plate as of late. With awful statistics from Brett Anderson for the Brewers, look for a surge from the Cardinals late in the season to get them in the playoffs. 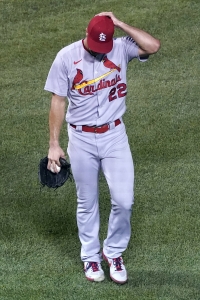 Jack Flaherty is the ace for the Cardinals squad, at 3-1 in six games in 2020. His analytics above are considerably better than Anderson’s. Especially his hard-hit percentage and Whiff. If you have a pitcher with a high hard-hit percentage and a low whiff, you get a pitcher who allows a multitude of hits. Flaherty makes it tough on batters at the plate. As his barrel rate is below five percent which means hitters are not finding the sweet spot on the bat. Flaherty has pitched twice on the road in 2020, where he’s split his two games between the Chicago Cubs. He will finally get a different opponent on the road, and this time it’s a much weaker opponent, only batting .210 at home. Look for Flaherty to continue his impressive K-BB ratio as the Brewers are strikeout at an alarming rate vs right-handed pitching.

Brett Anderson is one lucky pitcher. He benefits from being a very high ground ball pitcher. If Andeson does not keep the ball down, his 48.2 percent hard-hit rate will give the Cardinals every opportunity. Contact hitting team like the Cardinals love pitchers like Anderson, they can get in a groove as he allows many hits a game, but not a home runs. One guy who can smash home runs off Anderson is Paul Goldschmidt, batting .553 lifetime with 2 home runs. Anderson’s numbers at home in four games are not what you want to be backing, .324 batting average and an OPS above 0.900 will not get it done in the long run. Expect Anderson to get touched, as the Cardinals sit top ten in the majors when faced with a left-handed pitcher.

St. Louis Cardinals are swinging a hot bat, this team has played the least amount of games due to their Covid-19 outbreak in early August. St. Louis has regained almost 100 percent health, excluding Dexter Fowler who still is having complications with the virus. These two clubs will finish out the regular season playing each other ten of their last sixteen games. Whoever wins this series will more than likely be making the playoffs. St. Louis is led by Matt Carpenter, swinging it at a .375 batting average, with six hits, one home run, and five RBI’S. The Cardinals play their best when Flaherty is on the mound, after a rare day off to rest up, look for the Cardinals to catch fire down the stretch.

The Brewers have been a very streaky team in 2020. During the end of August, Milwaukee were smashing the ball, especially versus left-handed pitching. They put up a 19 spot on the Tigers a few weeks ago, but have hit a wall offensively. Led by longtime Brewer Ryan Braun, batting .438 with four home runs off Flaherty in his career. If we take Braun out of the lineup, Milwaukee is only getting their contributions from a few batters, one being RF Garcia from the club. He’s hitting a .391 average with nine hits and three RBI’S, take his bat out of the question and you have a very bad .210 hitting team versus right-handed pitching and at home. With nothing going the Brewers way, Flaherty will look to make things difficult on Milwaukee.