The PGA is back in action this weekend, as they now will be every single weekend through mid-December. The 2020 Travelers Championship predictions is the biggest tournament since the PGA returned to play a few weeks ago, and will be comprised of 156 golfers. As always, the Travelers Championship is set to take place at TPC River Highlands, a 6,841 yard par-70 located in Cromwell, Connecticut.

I fully expect players to come out and be extremely aggressive all weekend. With weather permitting, we should see some monster numbers at the top of the leader board for the second week in a row. TPC River Highlands measures nearly 500 yards shorter than an average PGA Tour course (7,300 yards) and 300 yards less than Harbor Town Golf Links, where we just saw Webb Simpson post a score of -22 to win the RBC Heritage tournament. I do not believe we will see multiple players shooting -20 or better again this weekend. However, we are dealing with one of the most talented fields for a Travelers Championship in many years, and I fully expect there to be close-nit competition at the top of the leader board for the entirety of the event.

The 2019 Travelers Champion was Chez Reavie, who bested both Zack Sucher and Keegan Bradley by a whopping four strokes to win with a final score of -17. Though I always like to give defending champions the benefit of the doubt, I will not be touching Reavie this year. There is simply too much talent in the field and too many phenomenal golfers who have yet to put their best stuff together since returning from the COVID-19 pandemic. (Specifically Rory McIlroy, Jon Rahm, Matt Kuchar, and Dustin Johnson to name just a few)

Although this weekend is accompanied by slight disappointment for many of us who were expecting to see the return of Tiger Woods, there is still a ton to look forward to, including all three of the world’s top-ranked golfers in action and of course, opportunities to make some money!

Finishing position bets are quite simple. They are exactly what their name implies which is simply a bet on where a golfer will finish in a tournament. Depending on your bookie, this is commonly the bet with the most flexibility. You are able to bet a range from tournament winner all the way up to a top-40 finish.

Koepka is currently the fourth-ranked golfer in the world. Despite that fact, he has had some slow starts in tournament play this year. He placed in the 100’s a couple of times before the pandemic and finished with a pedestrian -6 at the Charles Schwab Challenge. I like him this weekend because he was able  put together four really nice rounds at the RBC Heritage, and took home his first top-10 finish of the season.

Koepka notoriously does not practice golf. Instead, he relies on his experience, confidence, and natural abilities to get him through. So, it is no surprise he is not completely dialed in yet. He did nearly have a hole in one on a par-4 last Sunday though, so his driving seems to be in tip-top shape. For additional fuel to the fire, Koepka’s arch-enemy Bryson DeChambeau has been playing some amazing golf and has earned himself a third and eighth-place finish in the last two weeks. This will be extremely motivating for someone like Brooks Koepka, and I am confident we are going to see him at his best this weekend.

This is an easy bet for me. DeChambeau has been tearing up the course every time he sets foot out there. In the midst of his aforementioned third and eighth place finishes, he has yet to shoot a round worse than 70 and is averaging a score of 66. That is simply incredible. He has been extremely accurate, ranking at the top of the PGA Tour for fairways hit, and GIR. (green in regulation) I see no reason why DeChambeau would slow down this weekend. Expect a good clean performance out of him, and get ready to cash that +300 ticket. 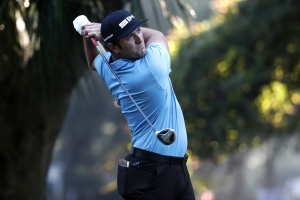 Rahm is currently ranked as the second-best golfer in the world. It is a deserved ranking, but you wouldn’t know it from his last two tournament performances. Rahm finished outside the top 30 at the RBC, and even missed the cut at the Charles Schwab. Strangely, those results actually give me a bit of solace and a lot of confidence heading into the Travelers Championship.

You are not going to be able to contain the world’s second-best golfer for long. Eventually, he is going to breakthrough, and I think we will see that “get right” performance out of him this weekend. Don’t throw a ton of money at him to win. I am thinking maybe half a unit, as I am less confident in him winning than I am in him having a solid, top-10 showing.

If you couldn’t tell, I am all in on Patrick Cantlay. It’s his first tournament back since the pandemic, which may be worrisome on the surface, but he specifically chose to wait to return until this tournament because he has history on this course. In 2011, as a 19-year-old, he shot a 60 to set the TPC River Highlands course record. A 60 as a 19-year-old!! Granted 2011 was a long time ago, but I promise you he has become an even better golfer since then. And if that is not enough to convince you, there is also the fact that he has placed in the top 15 each of the last 2 years here.

At this point in time, Justin Thomas may be the safest bet on the course. He’s been playing really well. The last two weeks have provided him with two top 10 finishes and bumped him up to third in the world golf rankings as well as second in the FedEx Cup rankings. I wouldn’t blame you if you decide to take him to win or place top 5, but I am going to take the bet I’m confident in and place my money on a top 10 finish.

There is not all that much to say about Tony Finau except that he is a very solid golfer. He always has the potential to make a run at the top of the leader board, but you very rarely find him at the bottom or being cut. Ever since making a name for himself by sinking a hole in one and then brutally rolling his ankle during the celebration at the Masters Par 3 tournament a few years back, he has become one of my favorites to bet on and has cashed more than a few times.

Top 30 is roughly where he has ended up in the previous two tournaments, so I expect him to play slightly better, but ultimately be in that range again.

As I mentioned much earlier in this article, I always like to try and ride the previous champion, but usually, it’s just as good, or better, to go with the guy who is coming off a victory. I understand if some of you are nervous about a letdown, and it is entirely possible, but Simpson is a really good golfer who is seemingly always towards the top of the leader board. I think he will come focused and ready to play.

I was debating taking him to finish in the top 10, but I have a feeling the top 10 is going to be very crowded and he may, just barely, get squeezed out. Since most bookies don’t have a line for top 12 or top 15, I’m just going to take the nice cushion that the top 20 provides and try to cash an even money bet.

Match up bets are a ton of fun, and maybe my favorite way to bet on golf. There are two types of matchup bets; full weekend and daily. In order to win a match up bet, your golfer simply must score better than their opponent. It does not take anything into account except for the two golfers scores against each other. I love doing daily matchups, but unfortunately, those lines are not out yet, and it is typically better to bet them after seeing the first day of action anyway.

As I stated earlier, I think Rahm is going to have his bounce back tournament this weekend. Something else I’ve stated before is that I’m not a big Rory guy. He’s obviously a great golfer, but I have never liked to bet on him. He has struggled since coming back from the pandemic, as has Rahm. Neither guy has been playing his best golf by any standard. That’s why I think this is going to be the most interesting and competitive matchup of the weekend. Rahm will beat Rory this weekend.

I’m on the slight underdog at +105, which makes me very happy.

There are so many types of prop bets in golf. Every week is like the Super Bowl when it comes to prop bets. Though oftentimes it is hard to narrow down the ones you like best, this week I only had one really catch my eye.

I’m not going to throw a ton of money at this bet, but I think you should always have one fun prop going. The +350 payout isn’t a bad consolation either. Plus, it gives you something to look forward to all weekend long, as this bet cannot cash until everyone is finished and in the clubhouse. I think that we are going to have some awesome groupings on the last day and it will be competitive down to the last shot.

A par is most commonly seen out of the winner on the last hole, but I can see a situation where someone rolls in a big birdie putt to win it while their opponent barely misses and settles for par.

Safest bet of the weekend

Sometimes you’ve just got to take a moneymaker when it’s in front of you. These kinds of bets do not come with very large payouts, but you can depend on them to hit and can hedge some of your long shots with them.

Spieth has the best value out of all the top tier golfers. Other guys who are simply not as good as him are even heavier favorites at -250 and -300. If you are looking for a favorite and don’t mind laying the -200, this is the best you’re going to find.

I usually don’t like to lay anything in golf, to be quite honest, but I’m feeling good about the upcoming performance by the near back to back Masters Champion. I’ll be on Spieth -200 to make the cut

Best Bet of the Weekend

For all the reasons I listed above, plus the fact that he is fresh and knows without a shadow of a doubt he can dominate this course.

I invite you to follow us on Twitter @Odds110, check out our YouTube at OddsHQ, and please let us know if you find this content helpful and want more! My goal is to help everyone add another sport to their betting repertoire.

You can follow me at @SennholzOnSport for further advice and live bets throughout the weekend.

Good luck with your bets!