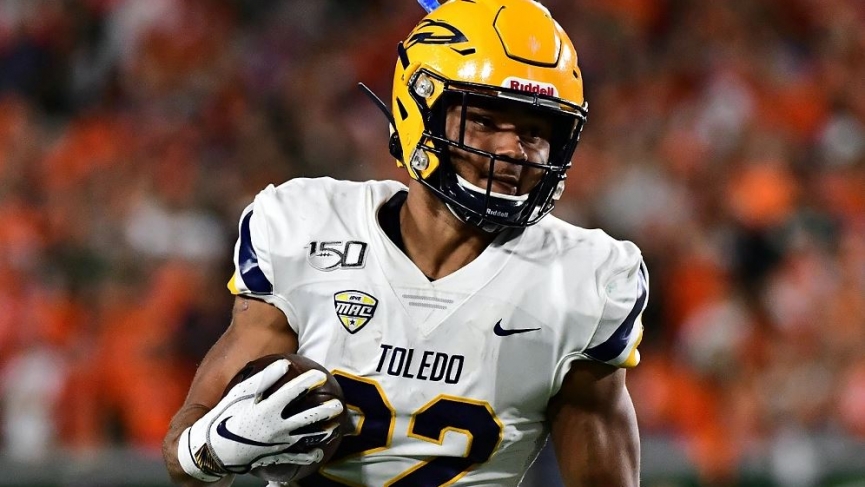 Toledo vs Western Michigan Pick – College Football Week 11: No time like the present, as the old saying goes, and that’s especially true for the Mid-American Conference after its late start to the 2020 schedule. The shortened slate sets up must-win scenarios just about every week, and we have one of those early showdowns Wednesday when the Toledo Rockets travel to take on the Western Michigan Broncos.you

ESPN will carry the 8 p.m. (ET) boot in Kalmazoo where DraftKings has installed the Broncos as 2½-point favorites. Bettors looking to play the scoreboard are faced with a decision on a 59½-point total.

Both teams were priced 6/1 on the college football futures to win the MAC, and each side got their seasons started with a victory last week. Jason Candle and the Rockets had an easy time of it at home against Bowling Green, building a 21-0 lead in the first quarter before coasting to a 38-3 triumph to cover as heavy 24-point chalk. Eli Peters threw didn’t have a huge day in terms of passing yards with just 214, but four of his 20 completions went for scores while the Toledo ground game rushed for more than 300 yards against a Falcons team picked last in the MAC.

Tim Lester’s Broncos also enjoyed an easy win and cover with a 58-13 decision at Akron. Kaleb Eleby completed just 12 passes, but they went for more than 260 yards and three touchdowns. Western Michigan also showed off a deep backfield than rushed for more the 200 yards and four more touchdowns.

These two have been butting heads annually since 1950, Toledo winning and covering the last three to build a 44-30 lead in the rivalry. The first two wins in the present streak were lopsided in the Rockets’ favor before last year’s 31-24 final in Toledo as Western Michigan’s late rally fell short. The weatherman is calling for chilly temps in the upper-30s at kickoff, and I’m laying the points on the Broncos.